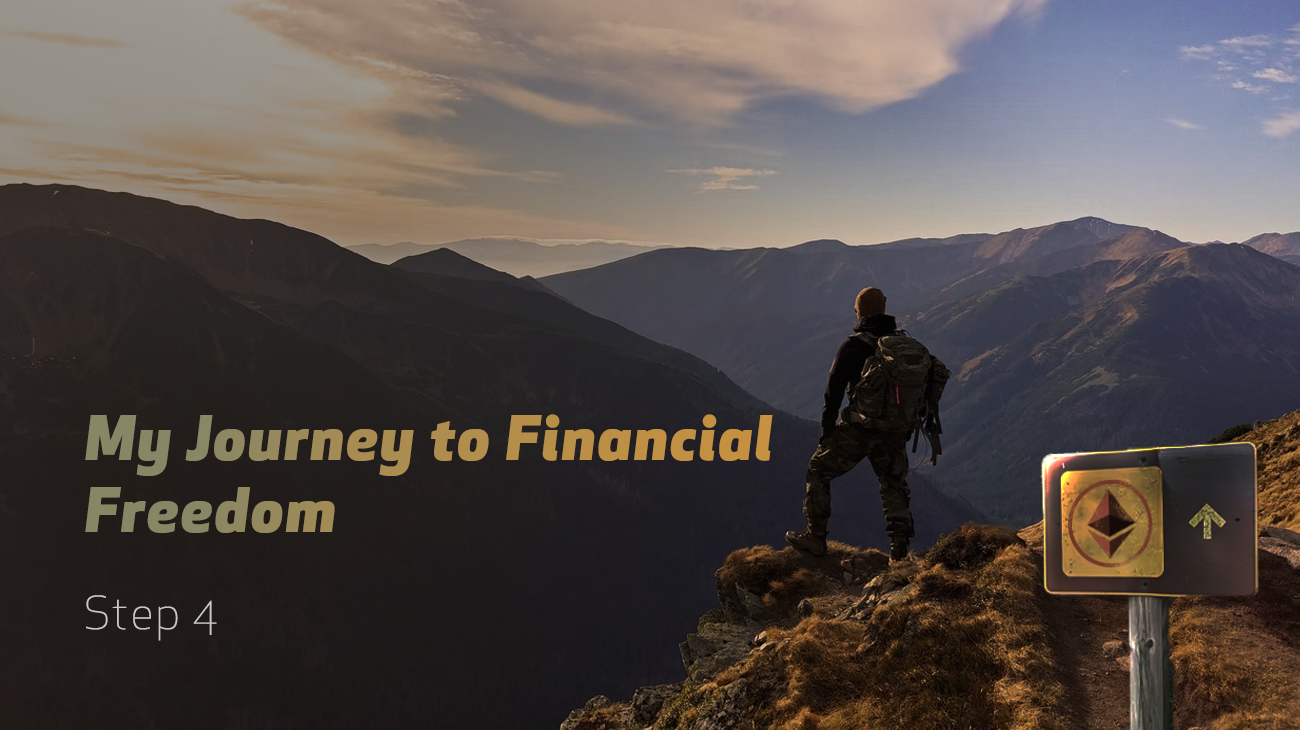 My Journey to Financial Freedom - Mining my own business

In this series of posts, I will be talking about my financial journey. Where my goal is to obtain financial freedom. This post will take about the very first baby steps I have taken into the crypto space. Some steps will take me forward to my goal. But some steps will also inevitably be sidesteps or even steps backward.

This is the fourth installment in this series. And today we will be taking a detour of sort. In the first 3 posts, I have talked about how I have gone about trying to start earning some money. And these ways have all been ways you could start up with as well. While this is technically true of this subject as well. It would probably require some investment, and at the very least it will mean an increase in your monthly cost. And what is this you might ask, well it is GPU mining.

Mining my own business

This was one of the first things I tried to do way back when. But Due to my own technical ineptness, I was not able to get it started. It was first with the help of my much more tech-savvy friend that I was able to figure it all out. But let me bring you all back to the start of it, shall we?

My friend asked if we should not get into mining as a joint hobby venture of the sort. We each would mine and it would be a thing we could talk about and learn about together. And sure I say, sounds like a great plan. He had already bought a few GPUs and had set them up to start mining. So he helped me with the basics as well. How to configure the BAT file, get a wallet, and so on.

But as I pretty recently upgraded my computer, with his help as well. You know tech-savvy and all. ^^ I made a conscious decision to omit to upgrade my GPU. Mostly because of the current insane prices of GPUS. And them not being in stores anywhere. So I had my old tried and true RX 480 4GB GPU that had been with me for the better part of the last decade I would say. The biggest reason for me not getting a better once at his time was actually money, never really had that much of it, to begin with.

The main reason for the lack of money is I have been long-term unemployed with only a few part-time jobs here and there as well. And that leaves very little room for saving up money. In any real capacity. As soon as any real unforeseen thing happens it usually tends to eat away at any savings I have managed to put aside.

So there was the money reason for not getting a new, or I should say better GPU. But there was always the "there will be new once coming soon" reason as well. As there are always new better GPUs coming, the talk of the town always seems to be how they put the old GPUs to shame. And seeing the prices where they were, both of us hoped that the new GPUs would bring the prices of the old ones down. But as probably the majority of you all know, this never happened.

The first strike with the pickaxe

There I was with my RX 480 GPU, and we had just configured the BAT file and we started up the miner mining some ETH. And pretty much nothing happened. Well, that seems strange. There should be some activity at least. My friend said. He started to google a little and then came that "aha" over discord.

Apparently, ETH has moved past 4GB GPUs. Well is that not just great I said. Just my normal luck. Well, we will look into it later he said as the clock was getting late. That night I was up a good couple of hours more looking into other coins, trying to figure out what was what, and if I could get any other miner to work. And I spent the better part of the next day googling as well.

And that was when I came across a site called Kryptex, and what they do is they have an app that lets you use both your GPU and CPU to mine, despite them not being optimal. So me feeling a bit proud I told my friend I had a solution to my problem. And I started to mine using this app. The downside with it was that with my setup I was not really getting much bang for my buck so to say. As the app does not have any setting for overclocking, it pretty much runs everything full blast. Or as much as it can without overheating, of course.

This however meant I was paying maximum electricity for meh payout. But it was the best I could do with my old tried and true GPU. But I still remember getting my first payout of $10 in Bitcoins. I was very much "f-k yea, I made this myself". Looking back, I probably paid $6-7 in electricity for it tho. But that did not matter. I still was as proud as ever.

If you want to try Kryptex or have a friend who wants to give it a try please use my affiliate link. https://www.kryptex.com/

Al this time I also had been checking the auction sites daily, some days even twice or trice. Looking for that nice bargain. Hoping I would be able to get a decent GPU for a good price. And what would you know? After a little while, I was able to find one. I got my hands on a 2060 super. And I only had to pay around $300 for it. Wich at that time was a good price. Shortly thereafter I was able to get my hand on a 3060 LHR v1 as well, paying only around $420. Now we were finally cooking.

After the 2060 Super, I was able to, sadly, part ways with my RX 480, which brought me just under $100. A price I was more than happy with. And I was then able to switch over to "normal" Ethereum mining. Using a "Propper" mining program. Seeing I had two NVIDIA GPUs I settled on T-Rex Miner. 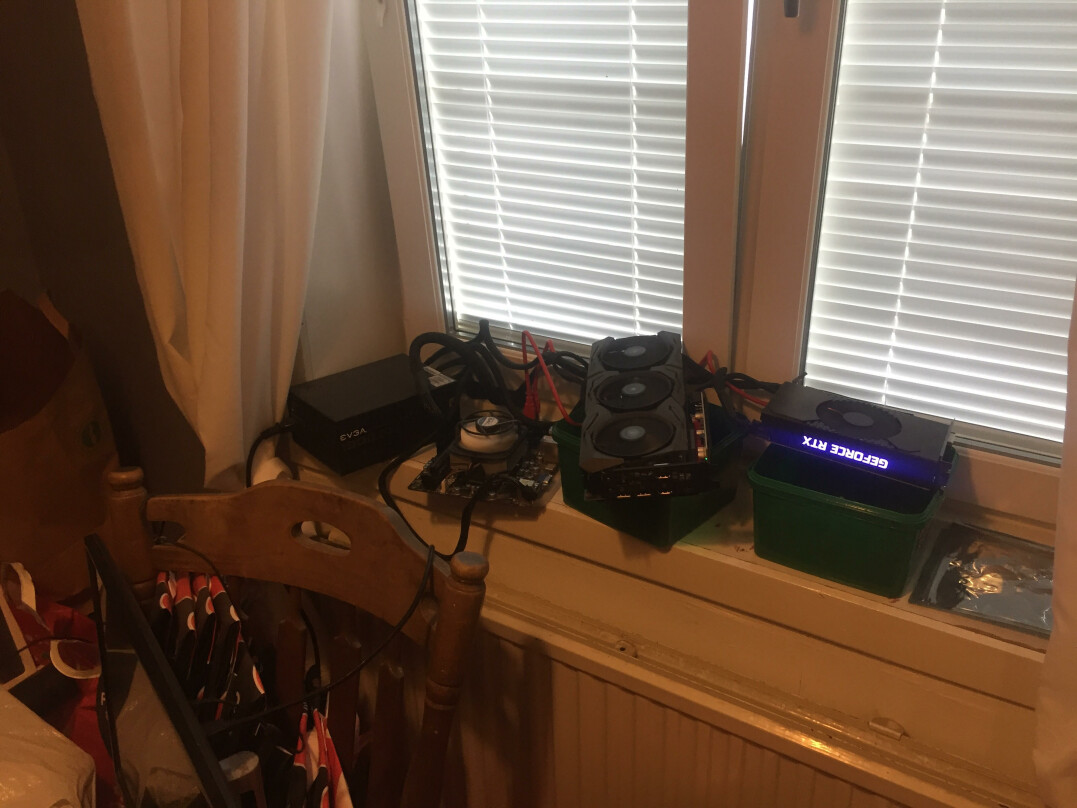 My current "open-air mining rig". And yes how very observant of you, those are green plastic tubs under the GPUs. ^^

Shortly thereafter I had a birthday coming up. And there I got a little money as well. With that and some more savings, I was able to find another 2060 Super for a good deal, this one I managed to get for $280. So even cheaper than the first one. It did however involve a train ride. But I was more than happy to oblige.

While most of the things have been pretty smooth sailing. I did have some small hiccups along the way. As my 3060 was a v1 LHR I could download the developmental driver from the web and with that running, do some other things, and voila I no longer had an LHR lock on the card. And while it took me a few attempts I finally got there.

There was a similar speedbump if you will regarding my first payment. As I now was mining ETH directly, and as all of you probably know the gas price for ETH transactions tend to be on the high side. This meant for me and my first transaction, I was left with $6 of my first $20, I think it was can't really remember the exact number, sitting in my account. While the support was very helpful in explaining it to me. I still felt it was kind of a strange thing all in all. Apparently, as it was my first transaction they had to hold enough ETH back in order to cover the highest gas fee at that time. So I then had to mine a little more in order to reach the minimum so I could then get the remaining $6 out.

To summarize, I now get my payout daily in NANO instead of in ETH, free of charge. And I probably have some ETH sitting back there earmarked for my old ETH wallet. But I will chuck that up as a learning expense.

The now into the future

That leaves me now with three GPUs up and running. The two 2060 are chugging away in my kitchen still. While I have the 3060 in my PC as my main GPU, still mining on it all the time tho. And to my friends' big surprise I am actually able to play while I mine. While he barely can use discord or youtube at the same time. ^^

Personally, I plan to mine up to the merge. And I will probably continue to mine after the merge as well. Depending on how that will affect the mining landscape. Hopefully, we will get a new coin that will take ETH´s place on the mining throne.

But I do have pretty high electric bills, so thank you Putin for that. Please go step in front of a bus won't you. So that is something I have to keep an eye on.

And for you curious cats out there. I keep the GPUs in the kitchen because my apartment gets really hot in the summer. So now I at least hope that the room I sleep in will be somewhat colder. And it is slightly less noisy as well.

I hope that you have found this look into my life as a miner at least somewhat entertaining. It is not one of my usual posts where I try and inform or educate as well as entertain. But hopefully, you found this at least somewhat of an enjoyable read. And if you would like to support me and the content I make, please consider following me, reading my other posts, or why not do both instead. You can find my other posts here and here.

You can also catchup on the previous week's episode here:

My Journey to Financial Freedom - Are you feeling Brave?