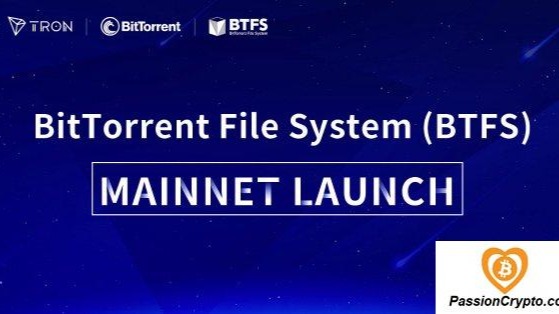 TRON CEO Justin Sun has announced and released details of the BitTorrent File Sharing System (BTFS) main network launch. The BTFS was created as part of a cooperation between TRON and the DLive streaming platform. Its development has been one of the priorities for cooperation between platforms in recent months.

According to the website, BTFS is the first scalable and decentralized storage system. Fully integrated with the TRON blockchain, its users can activate their nodes via wallets that support cryptocurrency. Its development has been the subject of controversy.

Being a bifurcation of the IPFS system, the creator of this system, Juan Benet, accused TRON and Sun of having stolen its brand, its logo, parts of its white paper and its code to launch BTFS. This has sparked much debate and has been described by members of the crypto community, such as Ethereum co-creator Vitalik Buterin, as something painful for the industry.

In the livestream, Sun celebrated the launch of the main BTFS network and invited all viewers to visit the BitTorrent website to download and start using the platform. According to the CEO of TRON , all viewers can start earning BTT anytime, anywhere. Sun said that BTFS offers its users 6 advantages: reliability, low price, greater decentralization, advanced incentive mechanisms, advanced encryption methods, user-friendly user interface.

In addition, he announced a new data mining model fully compatible with IPFS data mining machines. In this way, Sun wants users who own this equipment to be able to reuse it for BTT mining and not be left behind. IPFS exploration has a mixed consensus mechanism that uses proof of replication with proof of space-time, and although Sun did not say so explicitly, it can be assumed that BTFS extraction will work the same way to allow the above equipment to operate.

Users who wish to operate BTT with BTFS can download the BTFS bundle with the BitTorrent client from the official website, if they are using Windows. For Mac and Linux users, it is necessary for the user to configure their own node following the steps in the BTFS FAQ section. Sun said there would be 6 mining award models: storage space mining, BTFS storage mining competition, node repair mining, node reputation mining, storage verification mining, CDN storage operation.

Finally, the livestream addressed the question of possible comparisons between BTFS and IPFS. In order to protect against future charges, it has been clarified that BTFS is a unique product of BitTorrent , the official developer of the BitTorrent protocol . Below you can see the full livestream with Justin Sun: 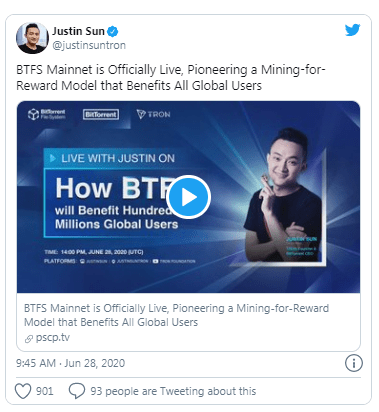