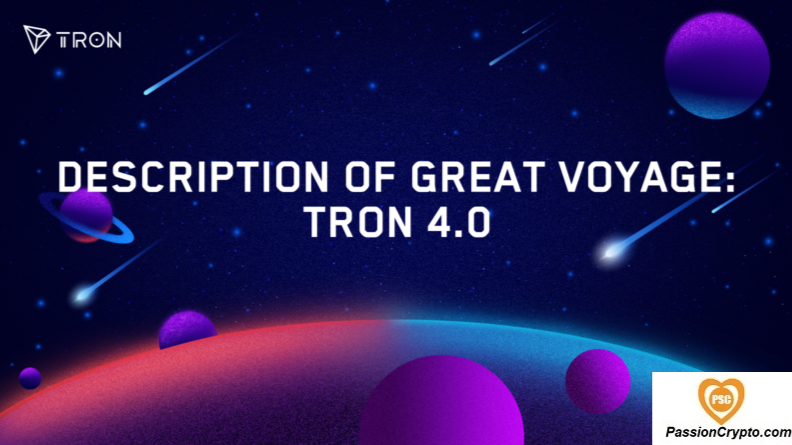 TRON 4.0 Highly Expected Will Be Officially Launched On July 7, 2020

mainnet iteration of TRON 4.0. Addressing the community in an open letter on Medium, the Tron Foundation says that TRON 4.0 will be officially online on July 07, 2020.

TRON has successfully undergone three major iterations since the company launched its main network on June 25, 2018. And TRON 4.0 is the fourth iteration that the company will adopt next month on July 7.

The launch of TRON 4.0 will start a pivotal moment in the history of blockchain

While announcing the news on Twitter, TRON CEO and founder Justin Sun said the launch will mark a pivotal moment in the evolution of the TRON blockchain .

According to the TRON Foundation , the upgraded TRON 4.0 has various key features. It now contains the first smart contract privacy protocol known as the TRONZ smart contract privacy protocol which uses the zk-SNARKS protocol and is supported by a virtual machine. Currently, it is the safest and most productive protocol. Other features include the TPOS double layer consensus mechanism and a brand new TICP cross-chain protocol.

"TRON 4.0 will become the gateway to financial institutions"

Describing TRON 4.0 in more detail , the Tron Foundation says that it is not only a question of creating DApps, but that it will become in the future a gateway for users and financial institutions to enter the world of blockchain through it. The Tron Foundation briefly explains TRON 4.0 in these terms:

" TRON 4.0 is not only the manifestation of the TRON vision " Decentralize the Web "but also the construction of a financial infrastructure for the next generation. It will not only be the first choice for small and medium developers when creating DApp, but it will also become THE gateway for financial institutions and business users to enter the world of blockchain. TRON 4.0 does not only concern DApps, but also decentralized finance. "

As soon as TRON 4.0 is launched , the Tron network will move from a blockchain-focused project to an industry pioneer, as the company claims in the announcement.

2.  Compatible with tokens for protected transactions  - TRC20 protected transactions support all standard TRC20 tokens, whether or not they are in circulation. Given TRON's unwavering commitment to creating a secure public channel that complies with global standards, TRX will under no circumstances be made anonymous. This privacy protocol only covers TRC20 tokens. As one of the many advanced features of TRON , TRC20 tokens can be used by simply executing smart contracts.

3.  More efficient underlying smart contracts  - The TRONZ privacy protocol is implemented by Java and Rust, which speeds up the verification process. At the same time, the Solidity code for private contracts is so succinct that it only takes a single instruction to check the proof of zero knowledge and update the Merkle tree. The protocol also defines the standard for TRC20 shielded transactions, which can be used by any developer to implement a TRC20 shielded transaction of any standard without a thorough understanding of the proof of zero knowledge.

5.  Support for transfers of any amount  - Unlike Ethereum's Tornado Cash , which only allows transfers of a fixed amount, the TRONZ Smart Contract privacy protocol is much more flexible because users can transfer no any amount of tokens, freeing them from repetitive transactions and multiple transaction fees.

6.  Well-balanced protected account mechanism  - To query a transaction and complete a transaction, different authorizations will be required. In addition, querying the sender and recipient side transactions will require different private keys. A private key can also be used for multiple private addresses, providing maximum privacy protection.

7.  Verifiable  - The sender and recipient of the TRONZ privacy protocol can send their private request keys to third-party agencies to verify transactions. That way you won't have to worry about losing unspent transactions.

8.  Out-of-band transmission  - All information on transactions protected in the TRONZ Smart Contract confidentiality protocol is stored in chain in the form of encrypted texts. Recipients simply need to scan the transaction in the block and unlock their recipient information with the private key; senders would not need to provide additional information through additional channels. During this time, senders can send notes not exceeding 512 bytes to recipients.

Built with the Groth 16 scheme, zk-SNARK, the ideal solution for the TRONZ Smart Contract confidentiality protocol, requires a multi-party calculation (MPC) to generate the initial credible parameters. In January, the TRONZ Foundation held its first draft MPC torch nonprofit, which have participated in total 196 members of the cryptographic community from different countries and industries. The participants were more numerous than those of the Zcash projectMPC, making it the largest MPC project in the world while providing the initial credible parameters of the privacy protocol. For more transparency, all results will be open source. In addition, we will continue to take steps to develop privacy protocols for the growth of the blockchain. As the MPC is about to end, the TRONZ Smart Contract privacy protocol has chosen the hash of the 632800th bitcoin block as seed to generate the random tag,

The DPoS consensus mechanism currently adopted by TRONZ guarantees a high TPS, while the PBFT consensus mechanism allows rapid confirmation of the blocking. Both handsets will provide high TPS and reduce block confirmation time from 57 seconds to 3 seconds while maintaining a more consistent blockchain. In addition, the new consensus mechanism ensures the security of the cross-chain protocol by using SPV to check if the cross-chain transactions are chain. The key to implementing SPV is to know the SRs (Super Representatives) that produce blocks during the maintenance period and whether the current blocks are confirmed without actually executing the transaction. The solution to the above lies precisely in the new consensus mechanism.

Two blockchains that have implemented the TICP protocol can establish communication between chains; this refers to data transactions between two independent blockchain registers. As an essential stage in the development of the blockchain, the cross chain takes the form of exchange and transfer of assets between different blockchains. Due to limited resources, the TRON network has introduced a limit to the number of channels allowed to connect to the public TRON channel . To maintain a healthy environment between chains, we will punish anyone who commits malicious acts during operations between chains. In addition to this, TRONintroduce inter-chain staking and incentive mechanisms to attract more quality projects to the TRON inter-chain ecosystem .