What Is Psychedelic Rockabilly?
MyCryptoOutlook2022 BitYard Contest and Giveaway - $1,200 in ETH Prizes! >> JOIN FROM HERE << 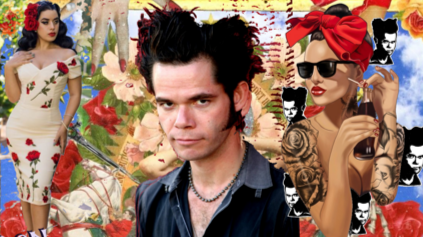 What Is Psychedelic Rockabilly?

I quit drinking in 2014 after losing a drummer to alcohol drama.  I also missed a show the next day, the only show I've ever missed.  I had to cancel it due to being sick from drinking.  Canceling that show bothers me to this day.  It's a good thing.  I cling to my regret at canceling a show like I cling to a life preserver; without it I might be tempted to forget what a waste of time it is being drunk.  If you're lucky, time is the only thing you waste.  A costly mistake, at best.  But the combination of losing a great drummer and missing a show was the last straw for me.  I went up to my other drummer friend's farm in Oregon and spent a month recording, smoking too many cigarettes, and not drinking.  He laid down the drum tracks for the Is It For Real? album, and I was able to finish both Your Arms Inside Me and Is It For Real? in that time.  I never went to any meetings.  I've been to meetings, and it was my experiences in going to them that kept me from returning to them when the time came to actually quit drinking.  I'm not a program guy.

I don't take drugs anymore.  I haven't even smoked weed in over a year.  Weed was the last to go, by virtue of it not really being a drug.  I think they're right when they say it's the "gateway drug," but they're wrong about the direction of travel through the gate.  Weed is the gateway AWAY from all the actual drug drugs that are actually dangerous and deadly.  Weed saved my life in 2001, when I had to quit drinking or die.  Every time I had a jones for alcohol, more than merely a desire, but a knowledge that I was going to drink, I took one hit of weed and the jones was instantly replaced with calm, peace, and gratitude to God.  God, meaning, the God of the Bible.  Not some blue demon with a skirt made of men's severed arms filling me with a sense of egocentric power, not a self-absorbed, new age turning inward that supposedly negates the experience of the self, but actual, visceral gratitude to Jesus Christ himself.  I saw the trees, and marveled at the detail of their construction.  Every tree contained thousands of leaves waving like living flags advertising Heaven.  It was like waking up from a nightmare, just taking one hit of weed.

It saved my life.

It took another 13 years to finally, actually quit drinking, even though I had several periods of relative sobriety that lasted up to 5 years at a time.  I smoked a lot of weed, among other things, but didn't quit drinking until 2014.

I have never looked back, and I am never going to.

The point is, because my heart and mind were so pre-occupied with wasting my time on hard drugs and alcohol, it wasn't until 2014 that I really began to see the need to take the band seriously as a business.  It's embarrassing to admit, but I didn't have the space in my head necessary to pursue the business of my band until I was 40.

I'd been booking, promoting, and playing shows for decades, of course, but getting the alcohol out of the way was like taking a drop ceiling out of a cathedral.  All of a sudden, there was no need to crouch or stoop down to fit in the room.  In fact, after I quit drinking, I couldn't have touched the ceiling if I'd been walking on a kite.  All of a sudden, it occurred to me to start promoting myself as a national, touring act.

Being over 40, nobody in my age range could possibly travel with me for any length of time.  At most, I could get a bass player to come with me to Vegas for the weekend, or southwestern Colorado, both of which are a day's drive away from central Arizona where the band was located.  For this reason, I started chapters of my band, like a motorcycle gang.

I'd played a show early in 2014 under the name Nathan Payne & The Wild Bores, and the name has stuck ever since.  My bassist friend and I were thinking of changing it, but a booking manager at a local bar convinced us to keep it.  I thought it was a funny name, but it's not the kind of thing I'd get tattooed on my arm.  I'm not a tattoo guy anyway, but if I was, I figured something silly like that isn't cool enough to have carved like an epitaph into your skin.  I liked the idea of changing the name of the band constantly, not only because I like the idea, but also because the lineup is almost never consistent.  I played a show in Chicago in the 90s under the name Nathan Payne & The Pat Buchanans, in which every band member wore a bathrobe and a different Halloween mask (the bassist was wearing a Bill Clinton mask, but got hot and took it off after the first song.  The surreal vision of Bill Clinton playing bass in a bathrobe while we launched into "Lord Chango/One More Nite" is a cherished memory.  That was a great show).

With alcohol and hard drugs out of the way, I started booking shows all over the Western U.S.  I'd been on several tours and played all over the U.S. before, but never methodically.  I'd spend a few months or years in NYC, or Austin, or Chicago, and play within a couple hundred miles of wherever it was, but until I got sober it never occurred to me to return to places that are over 1,000 miles away on a regular basis.

It was like taking a drop ceiling out of a cathedral.  All of a sudden, the possibilities were endless.

Nobody could travel with me, of course, so I started chapters of the band all over the Western United States.  I had my Colorado chapter, my Southern California chapter, my Reno/Bay Area chapter, my Seattle chapter, and of course the Arizona/Vegas chapter, which was home base.  Different rhythm sections in each city or region, different bands to whom I could travel alone (or perhaps with my duet partner), without having to incentivize some guy with 40 kids and a job to travel in circles with me for free.

It worked, and was actually a lot more fun.  Each chapter had its own flavor, a different drummer and/or bassist who put their own spin on the material.  For this reason, the show was always different, even if the set was more or less the same.  I met many of the bands at the show.  I'd "audition" them on YouTube, watch videos of them playing on YouTube and decide whether or not it was going to work.  The music is easy, but you can't always tell.  Sometimes it doesn't work out.  But more often than not, it does.

What everybody wants to know, though, before they book the band at the bar, or decide to show up sight-unseen with a drumset in tow is:

What Kind Of Music Do You Play?

The answer is never easy, because there really isn't one.  I'm a songwriter, not a genre devotee.  Some songs are "rock 'n roll," whatever that means; some songs have a country feel, with a loping, clippity-clop drum beat and a hi, lonesome tone that makes you think about strolling through a prairie on a horse.  Some songs have a drunken Irish vibe, or sound like they would best be performed by pirates in the belly of a creaky wooden frigate, but none of the songs are "Irish drinking music," or "country songs," or "rock 'n roll."  Not strictly.  Those things are nothing more than flavors in the stew that makes up my sound.

But you have to tell them something.  So I started telling them, Psychedelic Rockabilly.

It doesn't mean anything, and it isn't supposed to.  I'm not trying to be vague, but it's the best answer I can give.  The word "rockabilly" always conjures up images of people in the pre-approved rockabilly costume listening to car-show music (which, I like both the aesthetic and the music), but if you even glance at my material you can tell it isn't rockabilly, except perhaps as a default sort of natural influence that might happen to you by virtue of being an American musician, maybe.  The word "psychedelic" conjures up images of overly-colorful acid heads floating around on clouds of infinite jam, which is even less true than the "rockabilly" tag.

But it's a marketing device.  Rockabilly people and punk-rock tiki-bar people are by far the most-receptive audiences I ever have.  I can't possibly say "punk rock," because there is nothing even remotely punk about the sound, but those people also tend to know where I'm coming from, even if I can't use a word that will make them think they're going to hear the Ramones if they decide to come to the show.  The word "psychedelic" is really there to warn people that it isn't car-show music, and probably indicates some of the influence weed has had on my heart and mind and overall world view.  I haven't used actual psychedelics in a very long time, and in fact wasted my opportunities to use them correctly on the drunken, self-destructive nihilism I fell into in the late 90s.

So, what is "psychedelic rockabilly?"  It's music you will probably like if you like rockabilly, punk-rock, alt-country, and smoking weed.  In my opinion, it's music you will like if you also listen to Mozart, gangster rap, jazz, and/or any of the various submetals, but I'm not trying to get shows at the Lincoln Center, or appeal to the inner-city youth.  I'm just trying to get my name on the map.  You have to start somewhere.

And even if you're over 40 and have wasted decades on chemical drop-ceilings you never actually needed,

There's no reason not to start again immediately.

So, I'm going to Mexico City on Sunday to start the Mexico City Chapter of Nathan Payne & The Wild Bores.  I've been in Mexico for over a year, but I haven't tried to play for several reasons, only one of which is the lack of gigs and/or other musicians that are readily available in some of the smaller huge cities in Mexico.  Post-Covid especially, etc.

If you want to donate to the cause, all the albums are available via private download code on Bandcamp.  The best way to get them is to donate to my SubscribeStar; you get any 3 albums for $20, or the whole discography of 21 albums for $100.

There is also a limited-edition poster now available on RedBubble.  I get a fraction of a pittance for every item sold on RedBubble, so if you really want to donate financially, SubscribeStar and/or direct bank transfer is the best way, but I will have this poster available through Christmas, maybe New Year's at the latest: 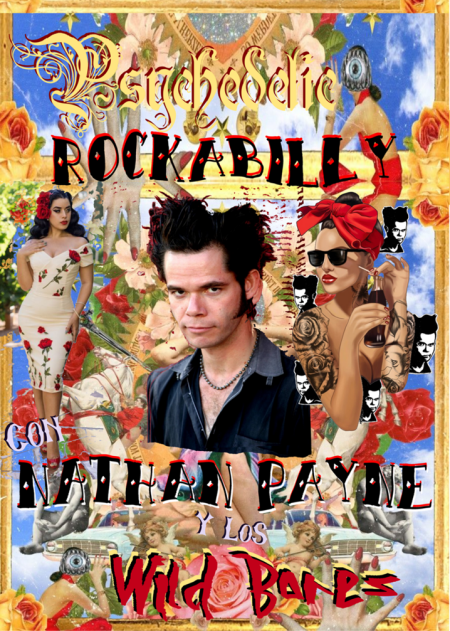 p.s.  If I had to pick one song that makes me think "psychedelic rockabilly," this would be it: