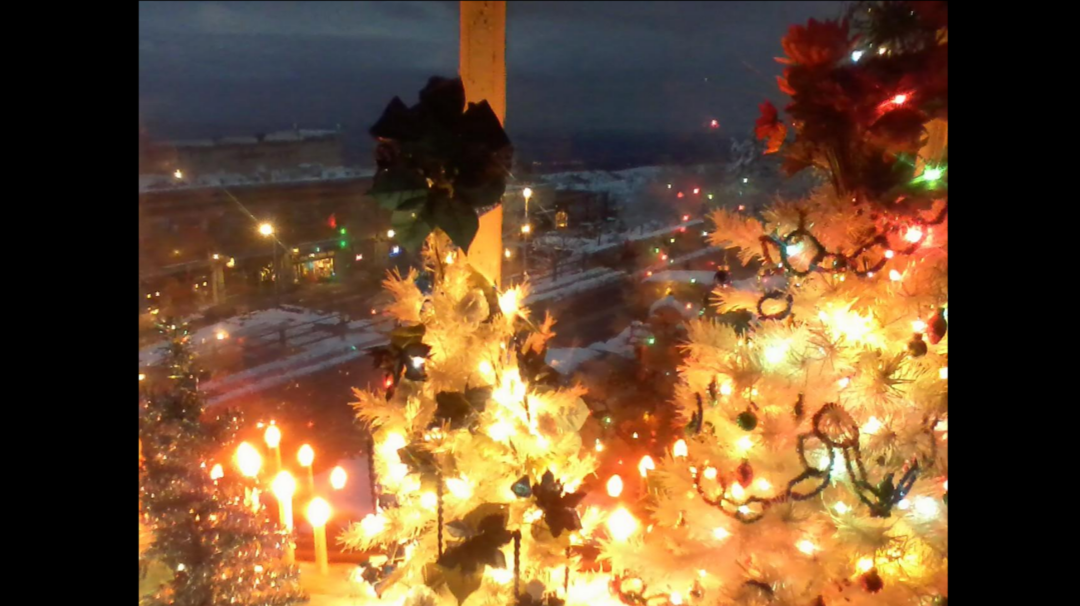 I heard a Christmas song for the first time this year today, at Walmart of all places.  I don't remember which song it was, but it was a good feeling to hear it.  The walk from the apartment to Walmart isn't dreary; after crossing the vast, beautiful Paseo de la Reforma, there's a sleeping street fair you can cut through if you don't want to walk all the way to the busy corner.  It's fun to walk through the rides and carnival games and listen to the loud music the carnies are playing while setting up, or sleeping in tents under the rides.  You can walk under the Ferris Wheel and past the horses on the Merry-Go-Round, the bumper cars napping under vinyl coverings, and the food stands getting ready.  It's nice, but it doesn't feel like Christmas.

So hearing the canned Christmas song at Walmart was a welcome reminder of the beauty of the season.  Walmart was surprisingly festive, for Walmart.  People were lined up in the frozen bird section to buy turkeys, and everybody seemed happy, with a definite air of looking forward to the holiday.

That's how disenfranchised and alone and far away I am.  I'm not going caroling, or wassailing (whatever that is), or sledding, eating Christmas cookies, drinking egg nog, buying wrapping paper, or doing any shopping for any children, friends, or anybody at all.  I'm vibing off the crowd of foreigners at Walmart in a massive Halloween metropolis where I know absolutely no one while buying shaving cream and cat food, trying to decide between chicken or fish for Christmas dinner.

I remember brushing my teeth at the steel sink in one of the men's rooms in Griffith Park in Los Angeles one Christmas.  Somebody walked in to take a leak, and was taken aback at the sight of some guy brushing his teeth in the city park.  He must have felt sorry for me, because he said "Merry Christmas" on his way out, an unusually friendly gesture for Los Angeles.  I returned the sentiment, and went back to my car, probably to drive to the top of the hill and enjoy the relative emptiness of the park on a holiday like Christmas.

That was a rough year, but the worst Christmas I've ever had was probably 2013 in South Tucson.  I'd been wandering out west, aimlessly, sleeping in my van after a painful break-up in San Antonio, and my Christmas present was to sleep indoors.  I found a cheap place in a bad part of town and put money down for a whole week.  A whole week of sleeping inside and taking showers.  I wasn't sober yet, and had spent the last week or 2 wandering through Texas and New Mexico in a drunken haze.  I drank a pint of Jack Daniels at a rest stop on Highway 90, right where it hits the Pecos River, only a couple miles from the Mexican border, and watched the red moon come up like a lava lamp over the vast Texas prairie.  I remember the canyon and the stars and the river, and the madness in my soul.  It was a beautiful, terrible scene, and after finishing the bottle I hit the road at top speed.  I drove at a hundred miles an hour and was immune to all police.  The highway and I were one, and it was dark and endless, and the van was a chariot from hell, the tires burning tracks in the pavement like incendiary devices.

I flew through Sanderson and finally got tired and pulled over to pass out in a rest stop.  I awoke in No Country For Old Men country, my brain throbbing and puking in on itself as usual, and made a cup of instant coffee.  I'd slept in one of those rest stops that isn't much more than a wide spot in the road, a pit-stop lane with a picnic table, some yucca plants, and a garbage can.  It was like a metaphor for my heart and soul.  So I hit the road.

There are some random videos of the trip on "The Heart I Know By Heart Tour 2013" playlist, but the story is probably told best by the Your Arms Inside Me album.  I've never been one to document my life with a camera.  I document it with songs.  These lines from "One Girl At A Time" capture the Christmas spirit I was feeling at the end of 2013 better than anything I could ever put on video:

on the highway to hell

there's nothing more to tell

I arrived in Tucson a couple days before Christmas, and checked into the Paradise Motel on S. 6th Avenue, which is the main drag through the bad part of town.  I didn't know it was a bad part of town.  It was just the only place with hotels I could afford.  I had a great view of the police station, and proceeded to get drunk for the entire week.  Mostly on boxed wine, because it was a lot of alcohol for almost nothing.  A big dumb box of booze with a spigot, for $3.  I walked into downtown Tucson on Christmas day, up S. 6th Avenue, past a couple nice houses surrounded by Astroturf, the plastic grass they use for indoor football stadiums.  Somebody had put Astroturf down to give the impression of a yard, and a huge inflatable Santa stood sentry above the piles of dogshit that were scattered across the plastic green expanse.  I walked past the giant Santa and did some random loops around a post office, some empty buildings, and a parking lot before walking back down to my hotel to eat a ham sandwich and some storebrand potato chips and get wasted while watching HBO and trying not to think.  At some point during the week I had a furious conversation on the phone in the middle of the night, and when I walked outside the next day, I happened to run into the guy who lived next door.  He took one look at me and said to himself, "well yeah," or something like that.  He was obviously thinking to himself that the noise he'd heard through the wall last night made a lot more sense, now that he'd seen the neighbor.

One time, on my way to the Circle K to buy another 40, I walked by a guy who was dancing with his shopping cart on the sidewalk.  Slow dancing, or maybe he was rocking out a little, I don't remember.  Whatever he was smoking, it definitely put him on some kind of cracked-out ballroom trip.  He was having a great time.  I gave him a wide berth.

It was a dark and miserable season.

I've had some great Christmases too, like the one in Austin in 2006, just me and my buddy and his brother, walking his dog through the cemetery drinking beer and going home to eat sandwiches and write songs.  I wasn't drinking at the time, but my buddy was, and we had a good time doing nothing and being free.

One time, after shows in Reno, Las Vegas, and Flagstaff, I returned to my nice hotel room in Magdalena, NM, where I'd been living for a couple months.  I was driving back on Highway 60 on Christmas Eve, headed east through a snowstorm, and the town appeared like a ghostly chandelier through the frozen haze.  It wasn't the easiest drive, with the ice building up on the highway, and the blowing snow, but I made it back and my friends were having a little party in the lobby of the hotel.  My ex-Army buddy had made some kind of chocolates, or maybe a dessert, and there were a few people having a warm, comfortable gathering, and I said hello and ate some dessert and went upstairs to smoke weed in the warm bathtub and pass out in the heated room with the frosty windows looking out into the cold.

That was one of the best Christmases I can remember.

Another time in Jerome, AZ, I'd been able to stay at my friend's empty art loft, he was living in unofficially.  Nobody was supposed to be living there, including him, and I got evicted by a rich angry indoor person the next morning, but Christmas itself was pretty good.  Somebody left some chocolate at the foot of the iron stairs which led up to the loft like a fire escape, and I walked into town to attend the annual Christmas dinner at the Catholic church, in which parking lot I usually lived.  But at the moment I was in some lofts near the high school, and I walked up and said hello to my friends without needing to take a shower, like a rich man.  I was pretty good friends with the caretakers of the Catholic church.  We liked to smoke and talk at the side door of the church, with the entire Verde Valley sparkling below like spilled soda pop, or diamonds.  They made Christmas and Thanksgiving dinner every year, and even though the guy was a gay socialist who made Jewish Hanukah candles out of construction paper, which he put in the windows of the Catholic church to confuse people and piss everybody off (which is hilarious), we were in fact great friends, and enjoyed each other's conversation and company very much.  I took these photos during that dinner, looking out into the parking lot and over the city. 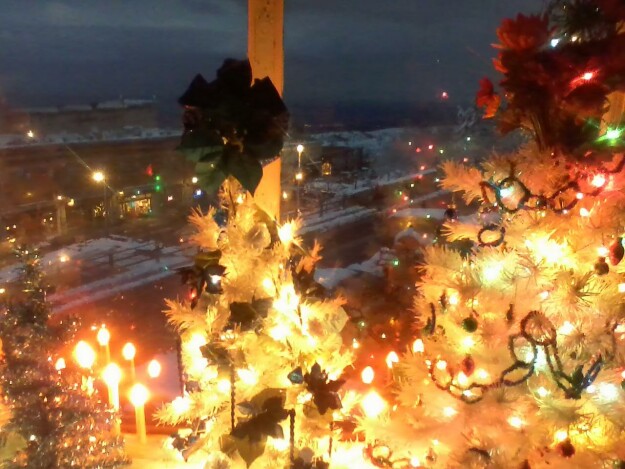 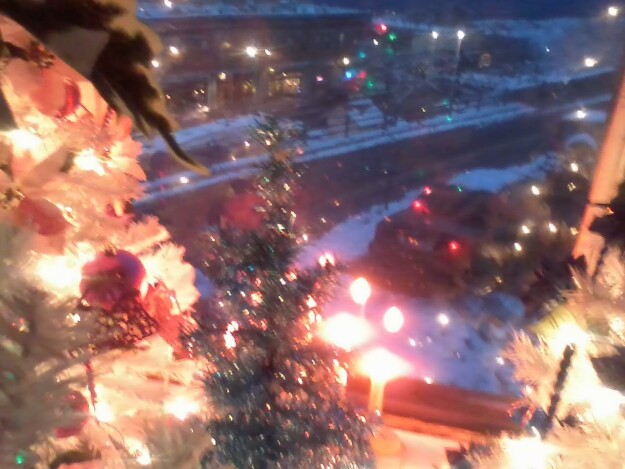 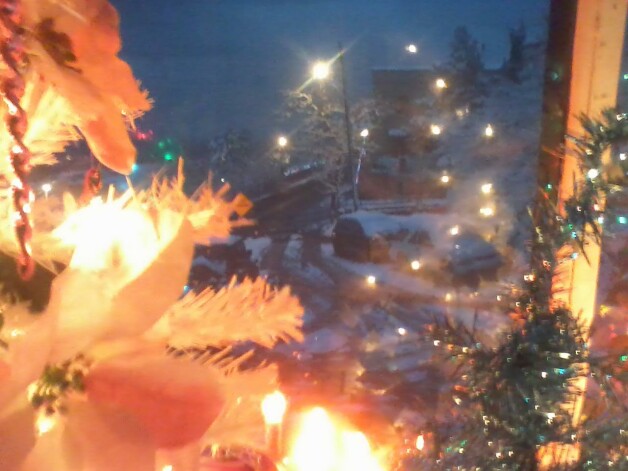 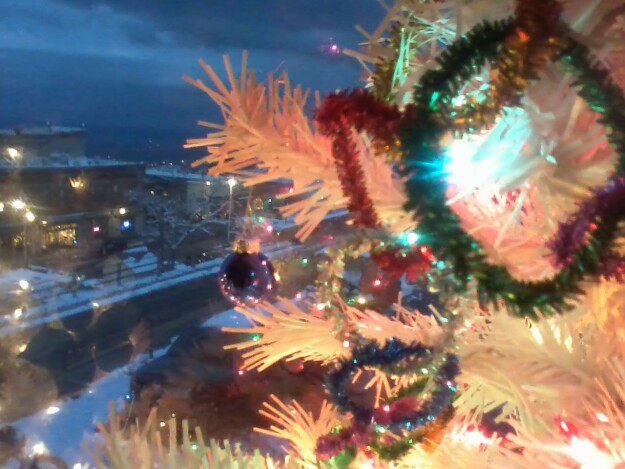 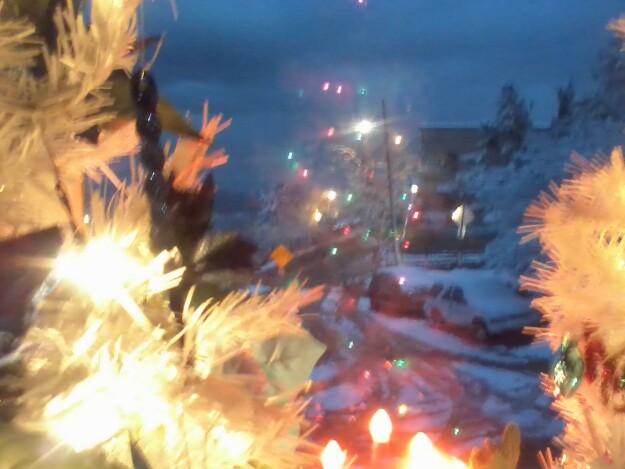 So, what's the secret to surviving a dark Christmas?  Hell if I know.  Stay away from boxed wine.  Listen to "Fairytale of New York."  Return the kindness of the guy in the men's room in the park.  And if the guy through the wall of a shady hotel in South Tucson is yelling about love and whores and hellfire, don't bother him.

And if you see a guy dancing with a shopping cart, try not to get his attention.