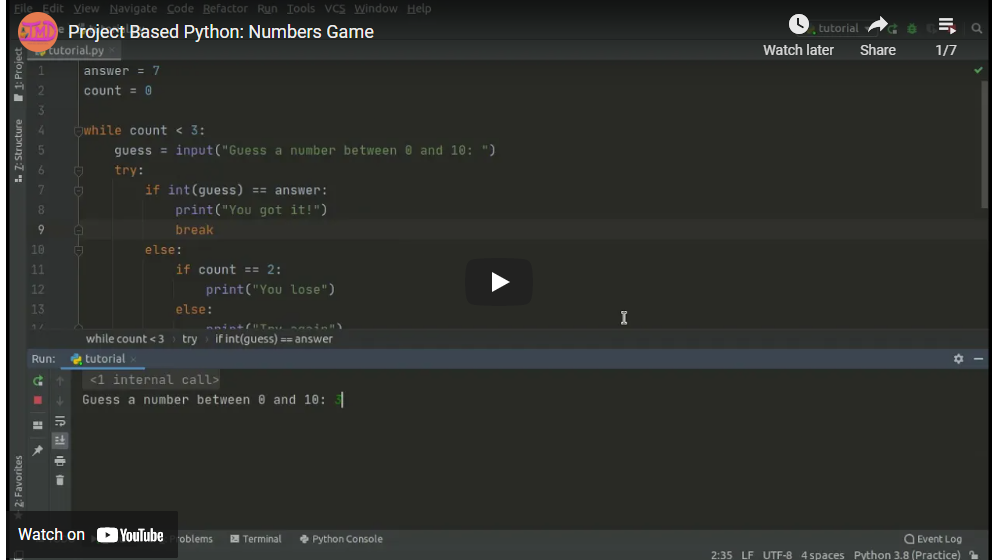 Project Based Python is a video series that serves as an extension to Py Learning Companion.  I explain how to create small projects using a variety of Python tools.  Each project covers a new concept while building upon the skills taught in Py Learning Companion, as well as previous videos in the series.  All projects come with the source code, which is available on GitHub.

You can see the full playlist here: Project Based Python

Numbers Game
This project covers basics such as loops, if statements, and user input to create a short number guessing game.  It is a great starting point as it doesn't require any knowledge of Python.  I make sure to cover beginner traps that one should avoid and teach simple debugging practices.  The game itself is very simple.  The user is given three attempts to guess a number between zero and ten.  If the user guesses correctly, they win.  Otherwise, it is game over.

Calculator
This project covers basics such as functions, loops, and if statements to create a simple calculator.  The calculator prompts users to enter two numbers and an operator, then prints out the result.  The project allows the viewer to use what they have learned to create a full fledged calculator with more complex functionality.

Guess the Phrase
This project makes use of dictionaries, loops, and if statements to create a phrase guessing game similar to hangman.  The program presents the user with an encoded phrase which they have to decode by guessing letters.  If the user is unable to guess the phrase after guessing ten times, the game ends.  Some safeguards are implemented in order to prevent the user from guessing letters that they have already guessed and any characters that are not letters are not accepted.

Username and Password
This project covers basics such as functions, lists, and loops to create a program that prompts the user to create a username and password within the given parameters.  The username is checked against a list of other users to make sure that it is unique.  The program then makes sure that the username does not have numbers in it and that its length is between eight and fourteen characters.  Finally, the password is only accepted if it is at least eight characters long and has one number, one capital letter, and one special character.

Country Capitals
This project covers using CSV files.  One file is used to populate the countries and capitals which are used in the quiz, while the other saves high scores. Lambda functions are also used to order multidimensional lists.

Database Module
This project builds on the GUI Username and Password program.  It adds a database module, which uses SQLite to save all created users.  It is also the first video to cover classes.

The source code for all projects is available on GitHub

I am a freelance Python and Java developer, founder of TMD Studios, hobbyist game developer, and Bitcoin enthusiast. My work can be seen here: https://tmdstudios.wordpress.com/