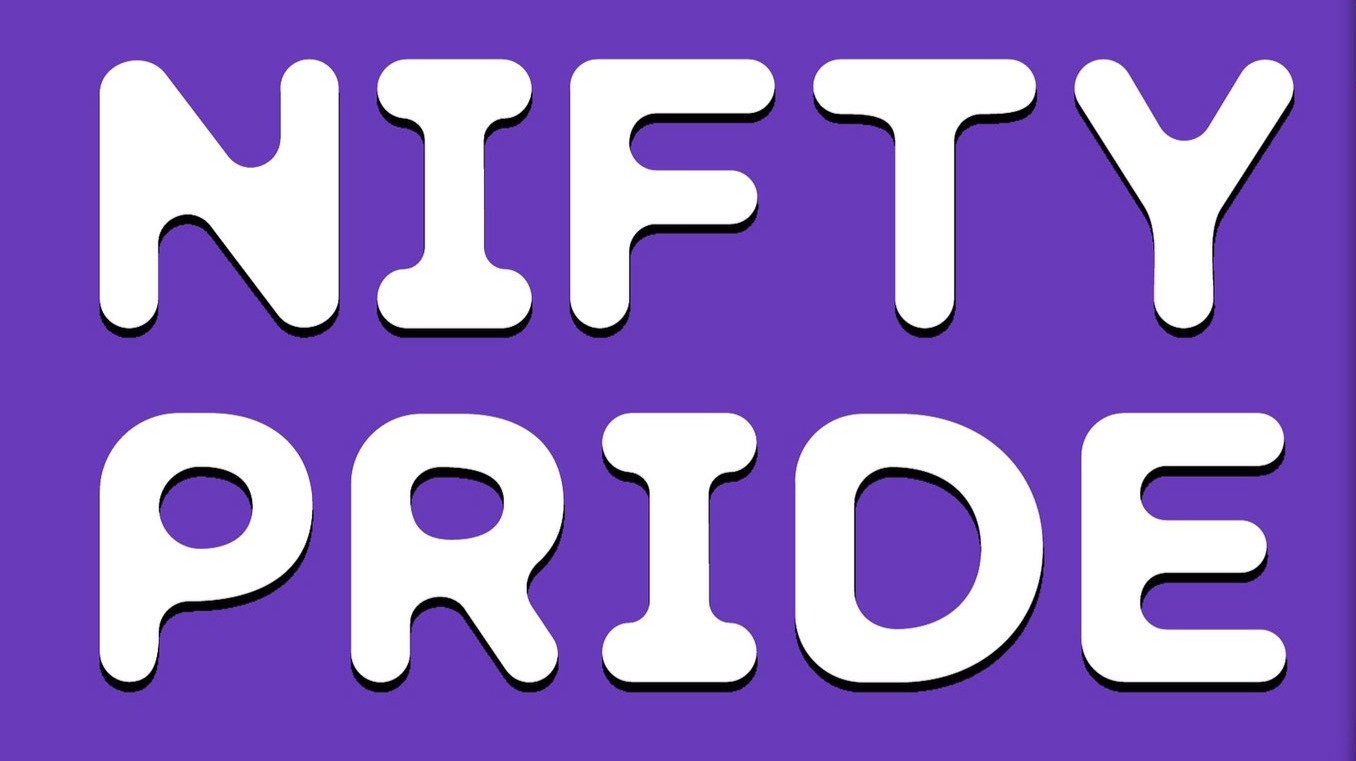 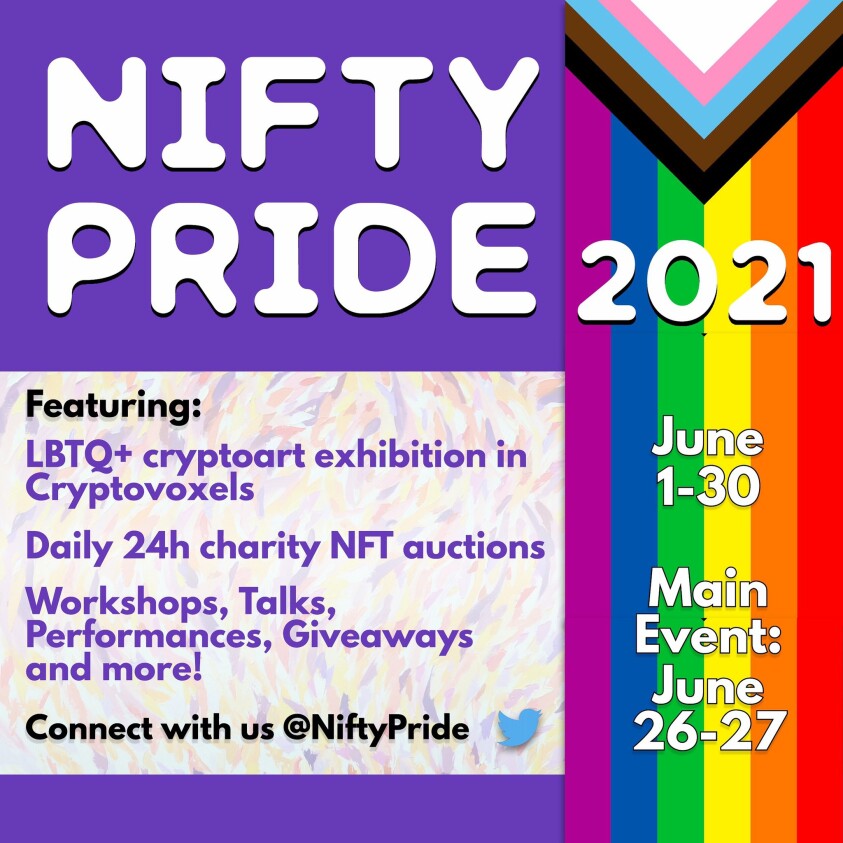 Late in June of last year; with the world being ravaged by covid-19, the LGBTQ+ community, on a global scale, were unable to attend annual Pride events to celebrate inclusiveness, acceptance and the freedom to love who you love. This led to a truly amazing event that was made up of a concerts, large-scale live conferences, and a 48h livestream from hundreds of cities around the world; all of which took place digitally and were broadcast for free to the entire global LGBTQ+ community. The event was dubbed Global Pride Weekend, and was, for myself and for many others, one of the brightest moments in a year that was so perpetually dark. About a week before Global Pride officially took place, I came across an NFT wearable for the Metaverse world Cryptovoxels that was a simple (but very well done) handheld Pride flag. I placed an offer a little over the listed price, because the gas fees were quite high (which seems hilarious in retrospect, considering the state of the network today)  and I didn't have a lot I could spend. To my surprise, a couple of hours later, the pride flag had landed in my wallet, but none of my eth had been spent. Within a few minutes of taking notice, I received a DM on discord from the items creator; thanking me for the offer and explaining that he had listed them at a low price to make them accessible and wasn't sure why I had offered more, to which I responded with an explanation of the high gas, low budget issue. Anyway, we had a nice conversation about our time in the NFT space thus far, and that led to a spontaneous idea, and me asking him (he had been in the space longer than me, and I assumed he might have a better read on the room, as it were) if he knew any other queer creators in the space, and whether he thought there'd be interest in a Metaverse Pride parade during the course of the upcoming Global Pride Weekend. Being in agreement that it could be a great experience, for at least the few LGBTQ+ people in NFT land we could come up with between us, we decided to set it up.


All in all, a gifted pride flag, and a spontaneous idea segwayed into a week-long rainbow whirlwind of organization and planning, during which an ENTIRE DISTRICT (The Bronx) in CryptoVoxels was decorated with rainbows and Pride themed art and furniture, 4 parcels being loaned to us to throw an art exhibition that featured over a dozen LGBTQ+ artists, as well as exclusive works created and donated by some of the most well known artists in the space at that time, and a near impossibility of scrolling cryptotwitter without seeing the hashtag #NIFTYPRIDE at least a few or more times. That weekend, CryptoVoxels experienced the largest, and most collaborative event to have yet taken place within its voxels, as close to 200 people came to view the gallery, bid on the live auctions being held in-world and streamed through the $WHALE discord community, and listen to a live DJ set perfromed by Vandal, the founder of DAO Records.


As the party wound down, and the rainbow-covered Bronx district became quiet, it felt as if it would be a disservice to everyone involved to simply call it a day and pack up Nifty Pride to return in a year. From a simple gesture, a gift from one stranger to another in a universally dark time, came friendships that will always share an incredible story of how they began, first sales for several of the showcased artists, and the birth of the world's first (as far as we know) blockchain-native LGBTQ+ support network, the Nifty Pride Foundation. Over the past year, we've collected several works from LGBTQ+ artists, built a permanent gallery on a parcel we acquired through a combination of donated NFT's, partial proceeds donated by the artists whose work we auctioned at the event, and even a collaboration with the popular creature battling game Drakons; with the very release of 51 Nifty Pride drakons, which was also the games debut of the frost element as a possible creature typing. More information can be found on the Nifty Pride blog here on Publish0x.

Unfortunately, everyone who would soon after come to make up the board of directors all had (and still have) prior obligations, and as we all know, there's no such thing as a free lunch; and certainly not in a market so prone to wild fluctuations. Because of us all having other plates spinning, and because the space has been evolving so rapidly, Nifty Pride has been relatively quiet over the past several months. But to my delight a couple of people from the community have taken the lead on planning and organizing a variety of things for this year's pride month; and hopefully, as NFThub should soon be able to stand on its own feet, I'll be able to get find a manageable balance in maintaining the two; to the extent that I'm necessary anyway.


Nifty Pride is very likely to become more of a network of initiatives spread across several blockchains, and already a Moloch DAO (though no one has joined it yet) in place on Eth to manage the major decisions that are necessary; which are few and far between. As far as I'm aware there's a Spudnik DAO being launched on NEAR, which will receive, for what its worth, my endorsement as the founder of the project; and will functionally (i assume) become Nifty Pride's NEAR division.  To return to the primary point of this long-winded post, Nifty Pride 2021 will feature daily auctions held on Twitter, with proceeds donated  to the Transgender Emergency Fund, there are several locations in the Metaverse that have been renovated to allow us to showcase a vairety of queer creators' works, and I believe there will be a couple different discussion panels and workdshops meant to encourage and enable creatorrs who aren't into NFT's to come and learn, and to be a part of a welcoming and inclusive community of their peers. The Main Event; which I'll post details about in the coming days, will take place on June 27th and 28th; while I don't think we have the bandwidth to add any more artworks to the daily auctions, and may not have space remaining in the metaverse gallleries, we hope that any and all LGBTQIA+ creatives will share their creations with us on Twitter or other social media channels, and tag @niftypride to make sure we cna (at the very least) help you get some more eyes on your work.


We hope that we'll see you in the community and at the events! 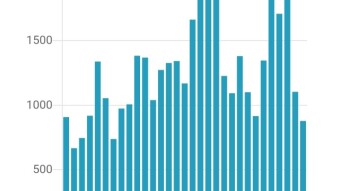