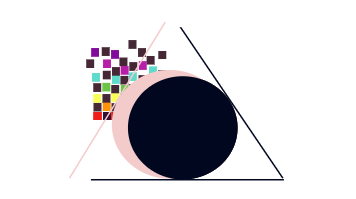 Hi this lil paper goes into a design I made probably 6 months ago for an alternative "stablecoin" design for the Nexus community. I had decided to distance myself from all this internet stuff for awhile, but right now I am curios if anyone would have comments about this design. At this point I wouldn't be surprised if another defi project already came up with something similar, but this was definitely a unique idea 6 months ago. Leave a comment!

ONE is a Non-USD related token instrument backed by the demand to retrieve valuable deposits. This design shares similarities with crypto collateralized stablecoins, but removes the need for liquidations and usd oracles. This system does not peg to any asset. While sharing similarities with crypto collateralized stablecoins, the ONE protocol removes the need for external oracles and changes the nature of liquidation events. I try not to describe it as a stablecoin, but many of the design principles come from engaging with DAI’s strengths and flaws. The community could see this as valuable because if successful, it allows individuals to earn a safe yield from assets on Nexus or increase risk to access more liquidity, while pooling the energy of both those behaviors into one token.

Depositors can lock collateral into a contract (which lasts for a set duration), earning interest and access to ‘Liquid Debt’ in the form of the ONE token. Any ONE spent must be returned before the contract's expiration. If not, the percent of outstanding Liquid Debt will be applied to the collateral deposit. That percentage of deposit will become publicly available, where anyone who exchanges the outstanding ONE debt can retrieve the collateral. This forms a system where the ONE token represents future ownership of a diverse pool of assets.

Depositors could be individuals which are both risk seekers or risk averse. Risk averse folks can access yield from their asset without risking loss by ignoring Liquid Debt. Risk seekers can essentially leverage their deposit by using the Liquid Debt. If they make good/lucky bets with the Liquid Debt and can repurchase ONE at a gain before contract expiration, then their risk taking will be profitable

The idea of paying interest to the people depositing collateral rather than charging them interest, originated from Ross Ulbricht's critique of MakerDao.  Liquid Debt mimics DAI in a sense, but instead of a collateralization ratio determining the collateral value vs the debt value (and liquidating below a certain threshold); taking out debt immediately places a proportional amount of collateral at risk.

The time terminating contract mechanism came from learning about futures contracts and other derivatives. Depositors can lock collateral into a contract, which lasts for a set time (eg 1 year, 6 months), earn interest and access to Liquid Debt. Any Liquid Debt spent must be returned before the contract's expiration. If not, the percent of outstanding Liquid Debt will be applied to the collateral deposit. That percentage of deposit will become publicly available upon contract expiration, where anyone offering the ONE debt can retrieve the collateral. In some sense this design resembles financial derivatives such as options or futures, but instead of trading the “rights to buy an asset at a certain usd price” this contract has somewhat different structures and motives.

The interest paid is minted from the system and a set percentage is used at contract level, however the ONE/NXS price fluctuates, so the interest will be functionally variable. In the flowchart I used 2% as an example, but this potentially (depending if they spend Liquid Debt) risk free interest, would realistically be set lower closer to 0.25-0.5%. Interest is not paid in full until the contract expires (there are more details there but I'll leave it at that). 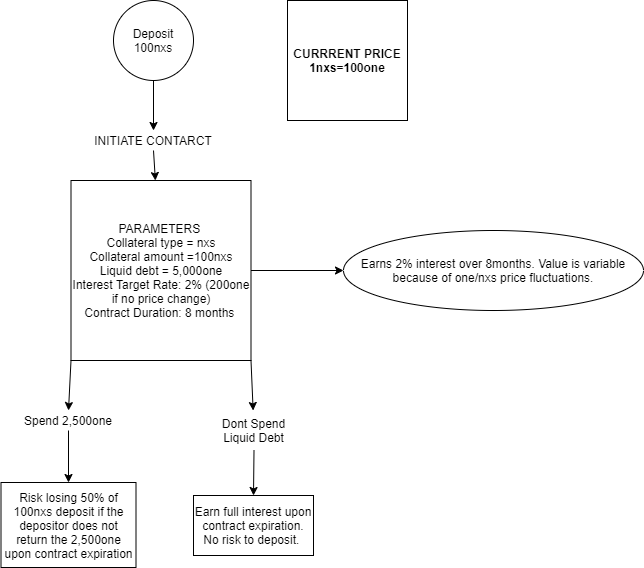 The major difference here from crypto collateralized loans rests on the concept of liquidation. In this system the loss of collateral occurs when the users doesn't pay back Liquid Debt. The degree of loss depends on the percentage of LD missing. In most crypto collateralized loans liquidation occurs when the usd price of the collateral dips below a threshold determined from a comparison of outstanding loan value to the value of the collateral. All of those comparisons require usd oracles, making the protocols extra complex and dependent on external input (oracle provider, and banks controlling usd)

Since this design does not involve usd, all the oracles can be internal to the Nexus protocol through the DEX. For anyone involved with defi on ethereum, oracle considerations are one of the toughest challenges, as they inject trust from an external system. By reducing this complexity and attack vector, we can focus energy on enhancing Nexus’s own operational and economic security rather than worrying about external oracle attacks (Maker had to create their own oracle network and its forces a time delay for prices, creating more complexity).

An interesting thought hole is guessing how this product would work for the first users. At first this was a concerning paradox because without a trading ONE/NXS market, how could the system start when it's based on having a value for that pair? Right now I believe that to initialize the first contract the ONE/NXS price needs to be set at a constant to calculate the Liquid Debt, as soon as the first trade occurs, anyone could start a contract. There won't be a market for ONE until the first user sells some Liquid Debt. The buyer knows what percentage of the deposit it represents, so they will offer something below the deposits value. As soon as the first trade occurs the oracle (nexus dex) can become the source of truth.

Traders and ONE Price Action: what happens when ONE price spikes vs when it dumps?

When it spikes, current depositors can benefit by selling their Liquid Debt, pushing ONE price back down by increasing the sell side and overall ONE supply. By selling their Liquid Debt they basically decide to take the gains from a high ONE price at the risk of forfeiting that percentage of their deposit (if they cannot rebuy the necessary ONE at a lower price to secure deposit).
When it dumps, depositing and starting a contract is attractive because the ONE available in Liquid Debt will be higher relative to the collateral when the ONE price is at low points, preparing themselves for a future price recovery, or good opportunities (to buy deposits on sale) without risking collateral.

Users are committing their collateral to the system through an immutable contract. They are rewarded for the opportunity cost of locking their asset and agreeing to tie the deposit to Liquid Debt. For accepting this contract the system mints a minor variable interest stream (part of which also funds development). If the contract is terminated prematurely the user does not receive a portion of the interest.
A positive increase in supply from interest also helps instances of irreversibly destroyed or lost ONE. If only Liquid Debt existed then any lost ONE means some collateral will be lost forever.
The interest provides users with a safe yield without the need to run a node, helping infrastructure poor individuals get ahead with their nxs without the risk of losing it. Clever or adventurous individuals can risk their nxs for potentially more reward. With this design we attract both speculators and savers.

I decided to cut short here since no one besides me wants to read about governance designs. Leave a comment below about the defi design if your interested, would love to see some holes poked and if anyone sees the same problems I do :)

Ideas for the network, generating discussion, more analysis as the network matures.