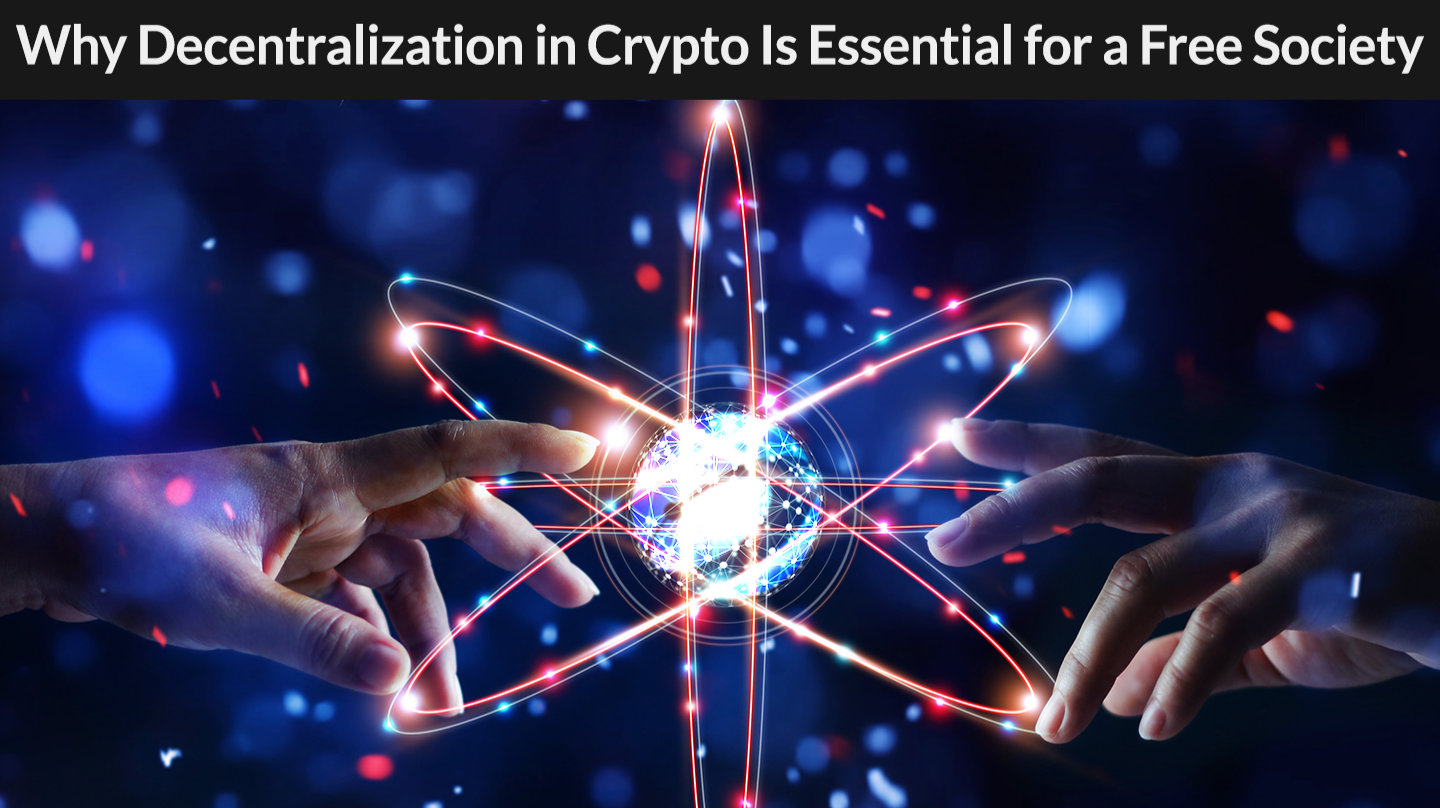 Why Decentralization in Crypto is essential for a Free Society

With their prodigious rise in the financial markets and public consciousness, it’s hard to believe that over a decade ago, Bitcoin and cryptocurrencies were within the realm of privacy enthusiasts and radicals.

Early crypto adopters admired the new decentralized network that offered to bypass overreaching governments, corporate control, and greedy middlemen. They were fed up with a financial system that had destroyed the world's economy and caused untold misery in late 2007.

We know that Bitcoin was partly a response to the financial collapse because its anonymous creator, Satoshi Nakamoto, embedded the text "The Times 03/Jan/2009 Chancellor on Brink of Second Bailout for Banks" into the genesis block of the Bitcoin blockchain. It is widely regarded as a timestamp and a comment on fractional-reserve banking.

The text refers to a headline in the UK’s respected broadsheet, The Times. A second bank bailout was under consideration by the then UK Chancellor of the Exchequer, Alistair Darling, and options on the table included cash injections, cheaper state guarantees to raise money or buying the toxic assets that brought the world economy to its knees.

The UK had already pumped £37 billion to partially nationalize struggling banks and the public faced dishing out more cash to large centralized institutions who had recklessly gambled money they never had. The decision to protect banks deemed “too big to fail” was taken by another large centralized authority, one designed to protect us.

Bitcoin was a new decentralized way to transact globally. It was a product of the internet, owned by no one and beyond the control of governments. Anyone can create a new address and send a transaction without needing any approval. There was no central authority, central servers, or storage. In fact, Bitcoin can be stored by anyone and every transaction is open to scrutiny. It’s a far cry from the complex, shady, closed-door deals that ruined the global economy. Bitcoin offered something independent and very different.

Why should we care if something is centralized or decentralized? What difference does it make to us?

Let’s consider the plight of the Canadian truckers who participated in the Freedom Convoy in Ottawa earlier this year. It doesn’t matter if you disagree with their message because, as citizens of a free country and fair democracy, they believed they had the right to protest. That belief became their undoing.

In order to break the protest, Justin Trudeau and the Canadian government invoked the Emergencies Act which introduced powers to freeze the bank accounts of protestors and applied terrorist financing rules to crowdfunding companies and individuals who pledged donations supporting the protests.

“These accounts, bank accounts, were frozen to convince people who took part in the occupation and illegal blockades to listen to reason,” claimed Canada’s Minister of Finance and Deputy Prime Minister Chrystia Freeland, who also added that some accounts may stay locked.

It was a draconian move to break up a protest, but the silence from Western governments, who made little attempt to condemn the move, was telling.

Whatever your views on the protesters, they are still bound to the economic machine with bills and mortgages, children to look after, and food to buy. You might agree it was the right thing to do but what if next time it’s you who needs to see reason and your bank account is   frozen because of a cause you protested for? Whether it’s about the environment, corruption, anti-government, human rights or war opposition, it matters little because when a successful, all-reaching power like this is unleashed, it will be used again.

Centralised institutions had little option but to comply with the Canadian government. However, due to their very nature, the flow of cryptocurrency from non-custodial wallets was unstoppable. Decentralised networks transcend national borders and are not answerable to individual governments.

It’s here that we must consider Central Banks Digital Currencies (CBDC) because the benefits of blockchain are apparent to everyone, and it’s inevitable that your country will issue its own digital currency. Any CBDC will be highly centralized and the code behind it will be written with specific goals in mind. Those goals will not favor individual independence.

Will a government do that to responsible tax-paying citizens? Of course they will. The Canadian government proved it already and others will follow suit for greater authority over their people. Financial freedom is an important part of individual freedom and decentralized currencies will help weaken their control.

So far, we have only touched on the financial aspect of decentralization but our personal rights are impeded everyday by multinational conglomerates that look to profit from every aspect of our lives. They are highly-centralized hierarchies that, at their heart, want to maintain shareholder profits.

Freedom of thought and privacy is crumbling in the face of easy money.

Do you want to complain to someone about it?  There is no point because your government primarily serves the corporations and not you.

This is where decentralization can offer real freedom as we apply those principles that can be directed right into the heart of democratic communities.  Decentralization will empower people at the local level by giving them a greater voice to influence decisions that affect their lives. With no large and distant central authority, the local response can be quick and dynamic because all participants are part of the same community.

Cryptographically authenticated checks and balances, along with regular elections, will build downward accountability which is the opposite of our current hierarchical system.

Services are offered at the local level with no large authority overseeing with blanket decisions, insisting funds are distributed a certain way. What’s important in one place is not necessarily so in another, and the freedom to make independent decisions benefits the maximum number of people.

The movement to decentralize everything is in its infancy and with next generation blockchain technology like Nexus pushing the boundaries, the possibilities  are endless. Centralized entities look to only benefit themselves; it’s their nature. Your freedom is irrelevant to them but the decentralization movement is growing and the days of the few making decisions impacting the many are coming to an end.

Contracts: Nexus supplies a 64 bit register-based virtual machineas the heart of its smart contract engine. A suite of APIs gives developers access to numerous ready-made contract functionalities. This relieves DApp developers from the burden of learning a smart contract language.