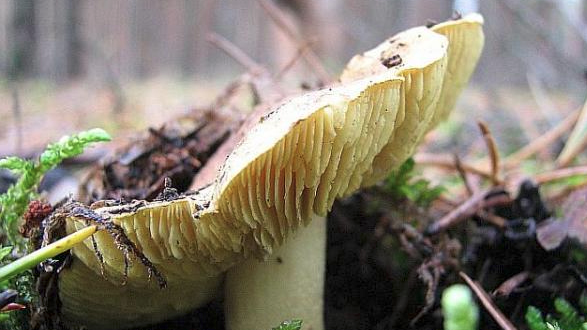 Tricholoma equestre var. equestre - Hat diameter 50 to 100 mm. Yellow-greenish color, sometimes with an olive or ocher shade, lighter towards the edge. The shape of the young fruiting body is hemispherical to bell-shaped, later spread out with a blunt umbo, finally slightly concave. The surface is bare or finely scaly, cracked in older specimens, smear during wet weather, often covered with sand and needles. The bank is initially incurved, often rippled in mature specimens.

The stem is pale yellow, greenish yellow, slightly lighter than the cap. Cylindrical to slightly club-shaped. 30 to 90 mm long and 13 mm thick. Smooth or finely skinlike surface. Full, usually deep in the ground.

White to pale yellow flesh, yellowish underneath the cap skin, unchanging. With the smell of fresh flour and a mild taste.

Occurrence: In coniferous and deciduous forests, most often pine with a sandy substrate. Frequent places from September to late autumn.