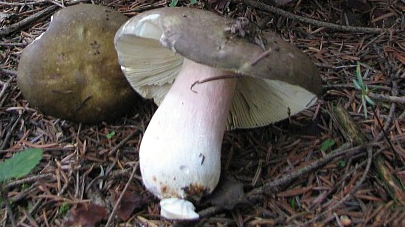 Russula olivacea - A hat with a diameter of 80-200 mm, initially hemispherical, later arcuate, then flat to slightly concave, thick, compact and hard, dry in the wet season, sticky, sometimes cracked to the plots. Olive yellowish, wine red to purple brown or dark gray-olive, often multicolored, spotted or with a concentric-wavy pattern. Matt skin.

Lamellae dense, fragile, thick, forked, initially pale yellow, then intensely yellow, on the blade near the perimeter of the cap red.

Stem 50-111 mm tall, 20-40 mm thick, cylindrical, massive, in the adult stage wadded, frosted from the outside, first whitish, then pink-purple to purple.

Thick flesh, initially strong and hard, later fragile; whitish, yellowish in stipe; with a sweet taste and an indistinct smell.

Occurrence: In the foothills and in the mountains, in deciduous and coniferous forests.