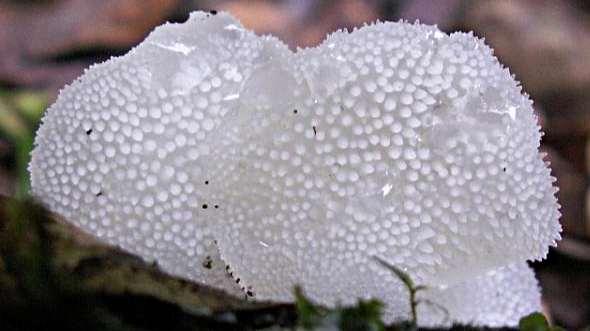 Pseudohydnum gelatinosum - The fungus reaches 10 - 100 mm wide and 6 - 20 mm thick, but sometimes larger sporocarps occur; it has a cantilever, scapular, lingual, rod-shaped shape and is attached sideways to the substrate; most often the sporocarps are grown together and grow tile-shaped one above the other; they are whitish, light gray, often with a blue tinge, but there are also fruiting bodies of violet-brown and dark brown; the upper surface is finely granular, papillary or suede, while the lower one with the hymenophore is covered with small, pointed, spiky spikes of whitish color with a bluish tint, reaching a length of up to 3 mm.

The massive core forms a whole with the fruiting body; is eccentrically embedded; reaches up to 50 mm in length; has the same color as the hymenophore.

Occurrence: quite common saprophytic fungus; sporocarps grow in large numbers throughout the year, but most often from July to November on heavily decomposed coniferous wood, mostly spruce trees, but also on deciduous wood; likes humid and shady places, often chooses the north side of the stump.