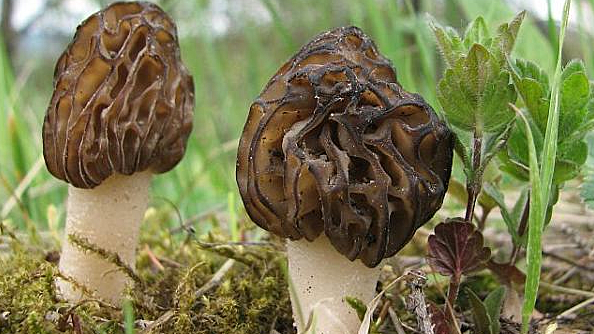 Morchella semilibera, commonly referred to as semi-free apricot, is a species of mushroom from the family Morchellaceae, originating in Europe and Asia. The head height is 20 to 80 (100) mm and the width is 10 to 40 mm. The fungus is ocher, nut, yellow-brown to olive-brown, as well as red-brown or gray-brown. Bell-shaped or hood-shaped, mainly with a dull visor, hollow inside. Surface with deep cavities (vesicles) formed by vertical blunt longitudinal ribs and poorly developed lateral ribs. They are lined with a gray-brown, brown or olive-brown spore layer. The head margin is slightly raised, stands out, not attached to the stem. The head is only partly attached to the shaft.