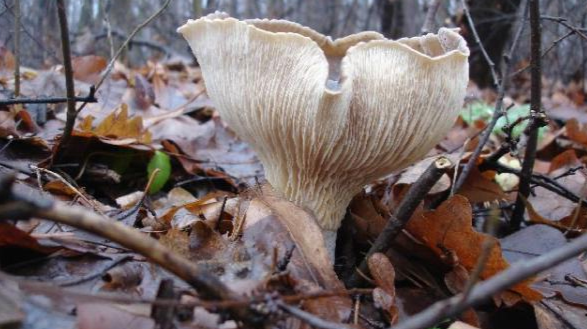 Clitocybe nebularis - A hat with a diameter of 50 to 150 mm, sometimes larger. Steel-gray to gray-brown color, darker towards the center. Dark gray to gray-brown in wet weather, light gray to gray or whitish gray-brown in dry weather. Initially convex shape, with umbo, later flattened, finally concave. Matt, bare or slightly frosted surface. The bank is rolled up, wave-shaped with age.

Lamellae 3 to 7 mm wide. Initially whitish, later ocher-creamy, finally yellowish, dense, easily separable from the flesh of the hat. Attached to the stipe or slightly converging.

The pulp is off-white, unchanging, with a strong sour, sweetish, mealy-rancid smell, slightly sour and even bitter taste.

Occurrence: In deciduous and coniferous forests, various thickets. It grows in large groups, ranks, or devil's circles, frequent. It grows from September to late autumn.

Value: Edible mushroom after cooking, without it can cause stomach upset. Not everyone tolerates its strong specific taste.