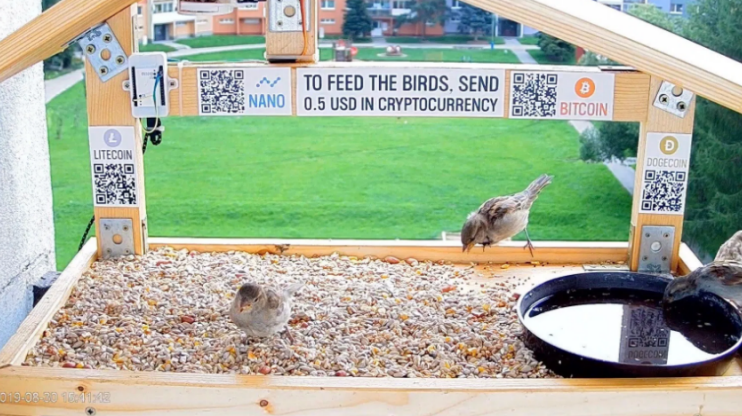 How many of you have seen the Interactive Bird Feeder Live stream over on YouTube? For those who didn't here's the link. The concept is pretty simple, these birds need food and Mr. Dove is willing to feed them with help from the community. What he did was set up a few payment channels so that users can tip their desired cryptocurrency in support of the birds.

This live feed caught a lot of attention. It was reposted by several crypto blogs and more recently by Yahoo Finance. In the article, Yahoo broke down the concept of this live feed, stating that a $.50 donation of either currency would result in the birds getting more food.

They then went on to talk about which currencies were being utilized to feed these birds, here's what they had to say.

As you can see Nano dominated in donations... I think we all know why, but here was Yahoo's reasoning

One reason for Nano’s dominance could be due to the fact that transactions on the Nano blockchain are cheaper than on the other cryptocurrencies. On the other hand, Nano-holders may also be less inclined to hodl.

Personally... I think they could have been a little more positive about why Nano was the obvious favorite, but this was exposure none-the-less. Do I think the price will see a major bump due to this news? No. But I do think Nano holders will continue to flood Mr. Dove's Livestream with Nano donations. This will hopefully bring more exposure to Nano, maybe even a more accurate headline, Anonymous YouTuber sets up bitcoin bird-feeder, just doesn't seem quite accurate enough for me.

If you want to check out the full article, you can view it here.