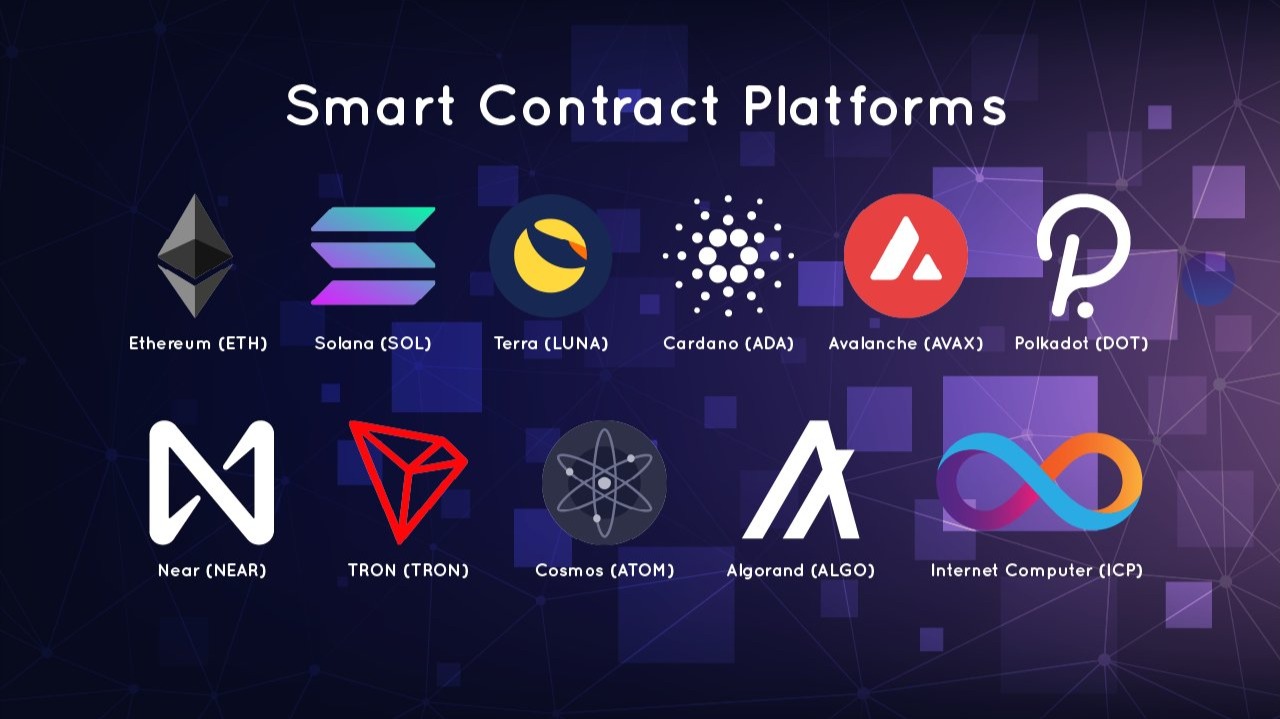 April was a rough month for the entire crypto market, including for Ethereum, Solana, Terra, Cardano, Avalanche, Near, and the Internet Computer. However, not only was it a bad month for crypto, US stocks suffered their largest monthly decrease since the Covid pandemic crash of March 2020 — with the Dow, Nasdaq, and S&P500 dropping to new yearly lows, and exacerbating signs that a bear market for the US and world economy has arrived. Because of crypto’s ascent into a legit macro asset, over the past 6 months it has shown significant correlation to the stock market, almost rising and falling perfectly in sync with the Nasdaq. Therefore, when the stock market and economy performs poorly, crypto also suffers, especially since it’s traditionally seen as a “risk-on” asset.

Here below is my monthly crypto round-up for the industry’s leading smart contract platforms, where I give a brief analysis into the price performance and news regarding Ethereum, Solana, Terra, Cardano, Avalanche, Near, and the Internet Computer.

Ethereum started April with a price of $3,288 and ended at $2,816 — a 14% decrease. The main headline that impacted Ethereum’s outlook during the month was the news that broke regarding a delay to the planned June merge, which would make the blockchain network faster, cheaper, and less power-hungry, transitioning from proof-of-work to proof-of-stake. When this news dropped on April 11th, ETH fell 8% from $3,215 to $2,947. Since then, there’s only been more downward pressure on the asset, given the overall bearish sentiment in the market and global economy. 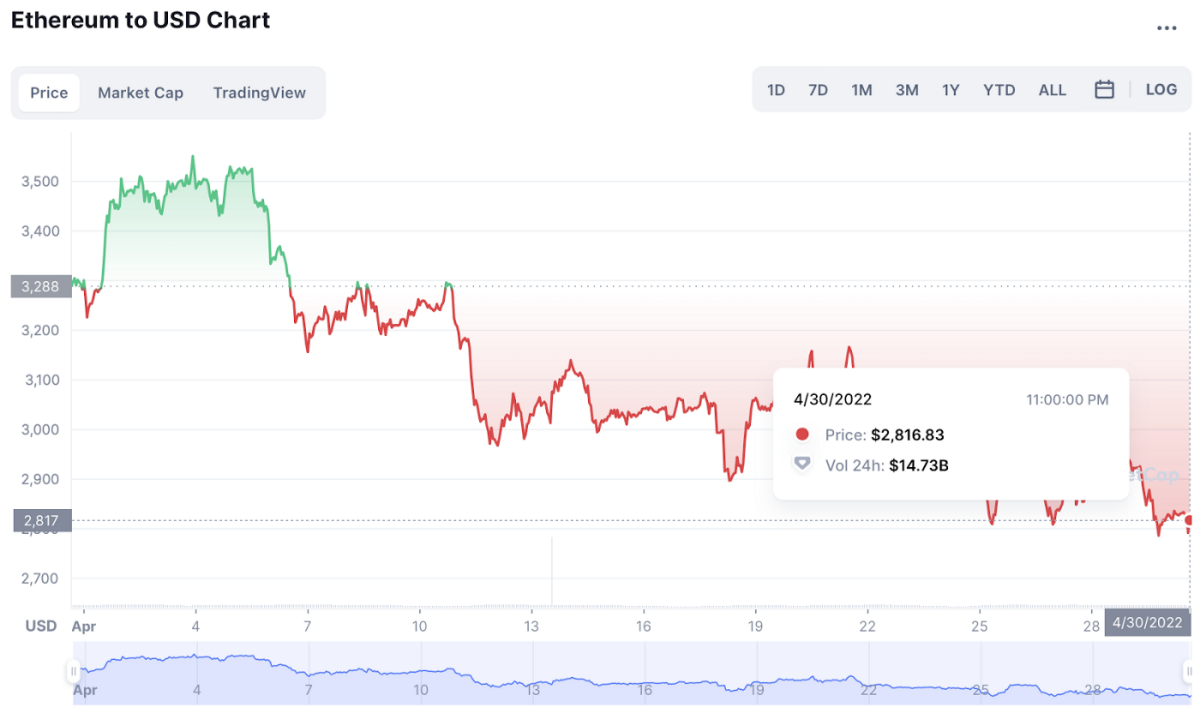 Solana started April with a price of $123 and ended at $92 — a 25% decrease. Since its all-time-high of $250 in November 2021, Solana has suffered tremendously, experiencing multiple network outages, which has caused its price to drop continuously since December 2021. It’s really for this reason alone that Solana has cascaded downward on a consistent basis. However, in April, Solana did avoid outages and actually had some positive news. For example, Solana NFTs had a good month, with Solana announcing that over 1.6 million network addresses currently hold an NFT. Moreover, positive news came to light about solid network usage on DeFi marketplaces, with Magic Eden and Orca showing healthy numbers and activity. Lastly, a new project called Stepn, which is a Solana-based move-to-earn game, saw its token (GMT) rise 34,000% from March to April. So despite the negative price performance, strong fundamentals and activity are still there for the Solana ecosystem. 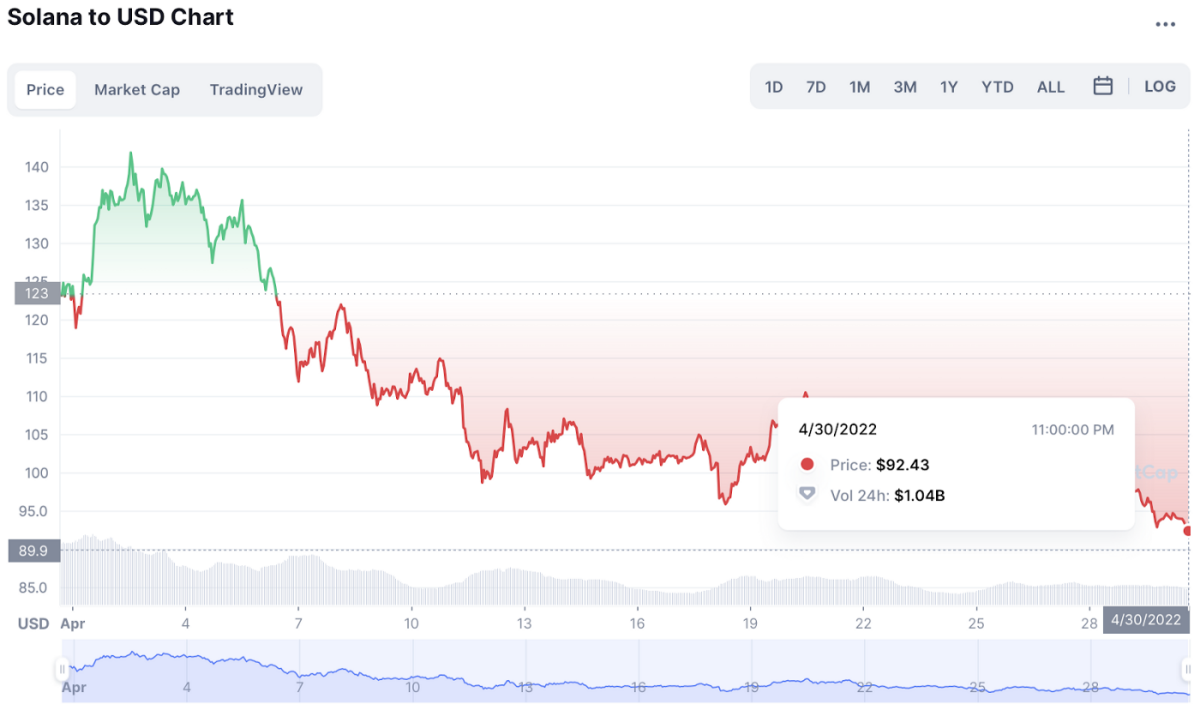 Terra started April with a price of $102 and ended at $82 — a 19% decrease. Terra has been one of the few assets in the entire crypto market that has performed well this year. In particular, from February 24th to April 6th, LUNA was on a tear, rising from $53 to $115 — a more than 100% increase. Much of this news came behind Terra’s announcement for a new algorithmic stablecoin (UST) and Do Kwon’s statements that he wants the Luna Foundation to be one of the largest Bitcoin holders behind Satoshi Nakamoto, with a goal of acquiring $10 billion worth of BTC. In short, to summarize Terra’s April news activity, it outdid MicroStrategy with a 5K BTC buy on April 5th and later purchased a combined $200 million worth of Avalanche (AVAX) tokens for its reserves. 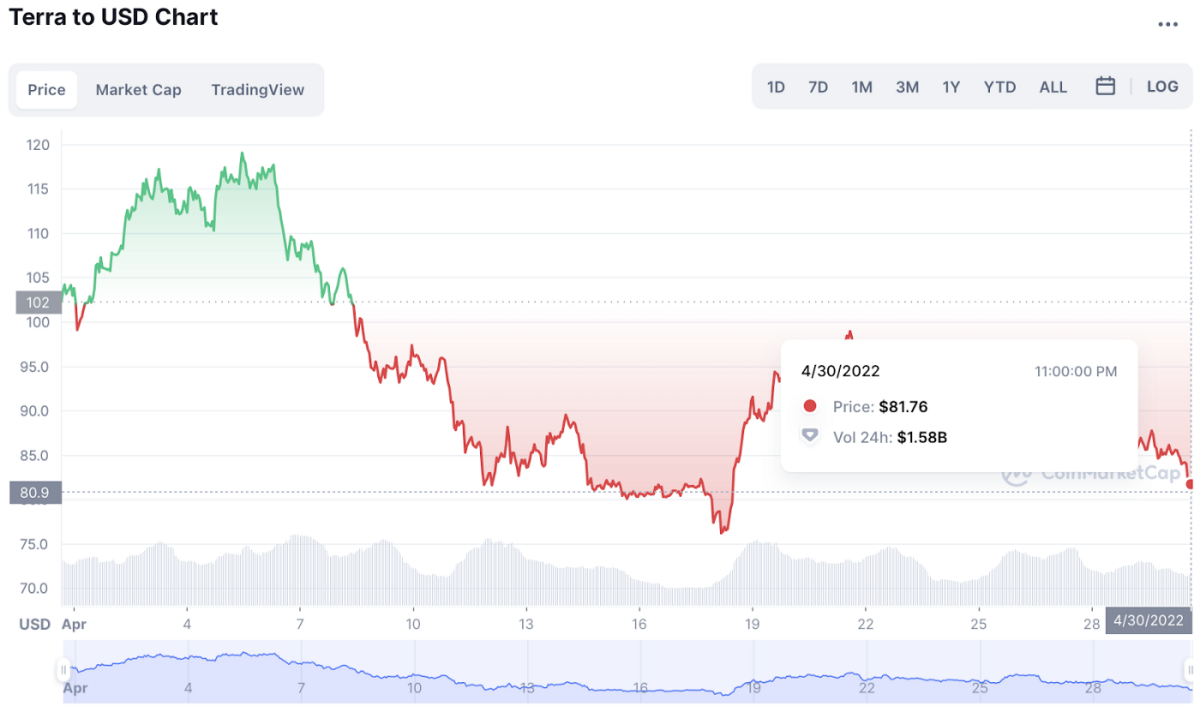 Cardano started April with a price of $1.15 and ended at $0.80 — a 31% decrease. The $1 mark has been a significant psychological price point for the asset, and as it slid back down to March lows of $0.80, there hasn’t been much good news for Cardano. In particular, expectations have not been met since the launch of smart contracts, and the number of decentralized applications is disappointing, with DefiLlama reporting that there are just 10 DeFi protocols running on the network with a combined total value locked of around $233 million. But in other areas such as decentralized exchange (SundaeSwap), Cardano NFT bonds, and GitHub development, things are looking brighter. In addition, on April 13th, Input Output Hong Kong (IOHK), the research and development firm behind Cardano, announced incredible network growth entering April 2022. Lastly, there’s an important network upgrade coming in June (the Vasil hard fork) to make the blockchain more scalable, so let’s see if that has any impact on ADA’s price in May. 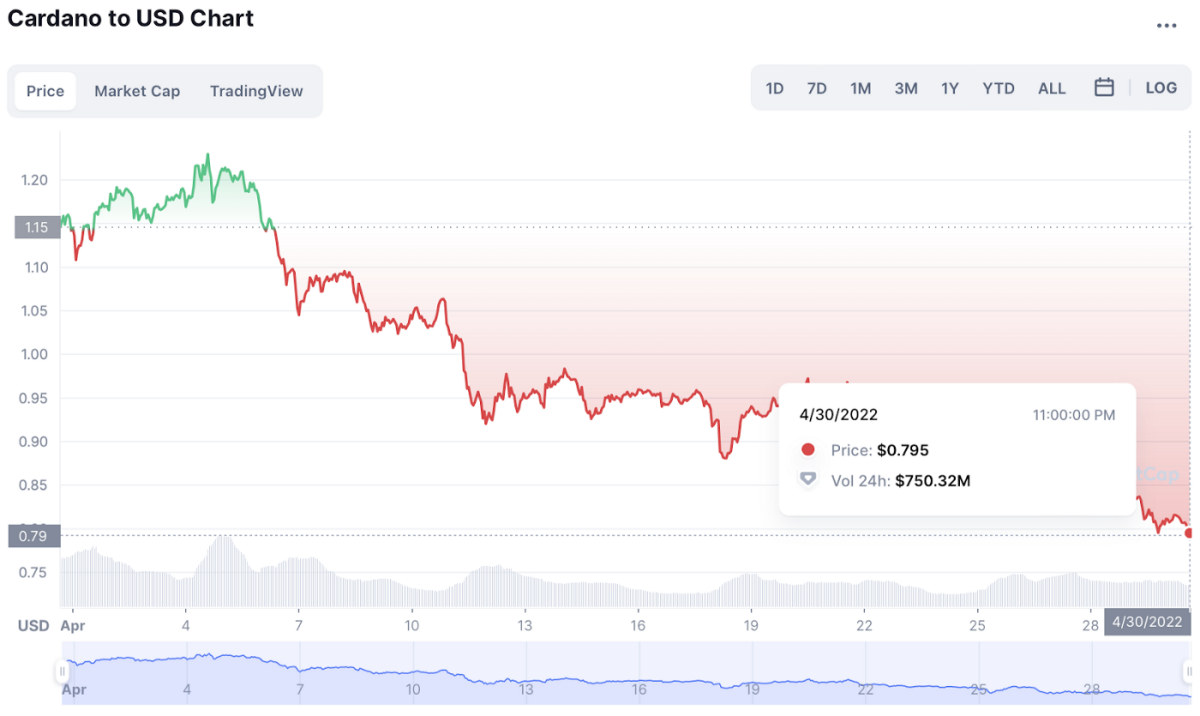 Avalanche started April with a price of $96 and ended at $61 — a 35% decrease. The price fall is largely attributed to the overall market. This is because the smart contract platform still remains a top contender for decentralized applications due to its scalability, low-cost transactions, and its large footprint in the DeFi landscape. In April there were also a decent amount of positive news developments: Ava Labs raised $350 million from investors and the Luna Foundation made a large purchase of $200 million in AVAX for its stablecoin reserves. Outside the investment space, according to DappRadar, there are almost 100 active applications on Avalanche, ranging from decentralized finance applications to NFT marketplaces and gaming. So with this in mind, Avalanche has a strong DeFi use-case, therefore, the bearish market sentiment and price performance is not reflective of the ecosystem, but rather a reaction to the macro economy. 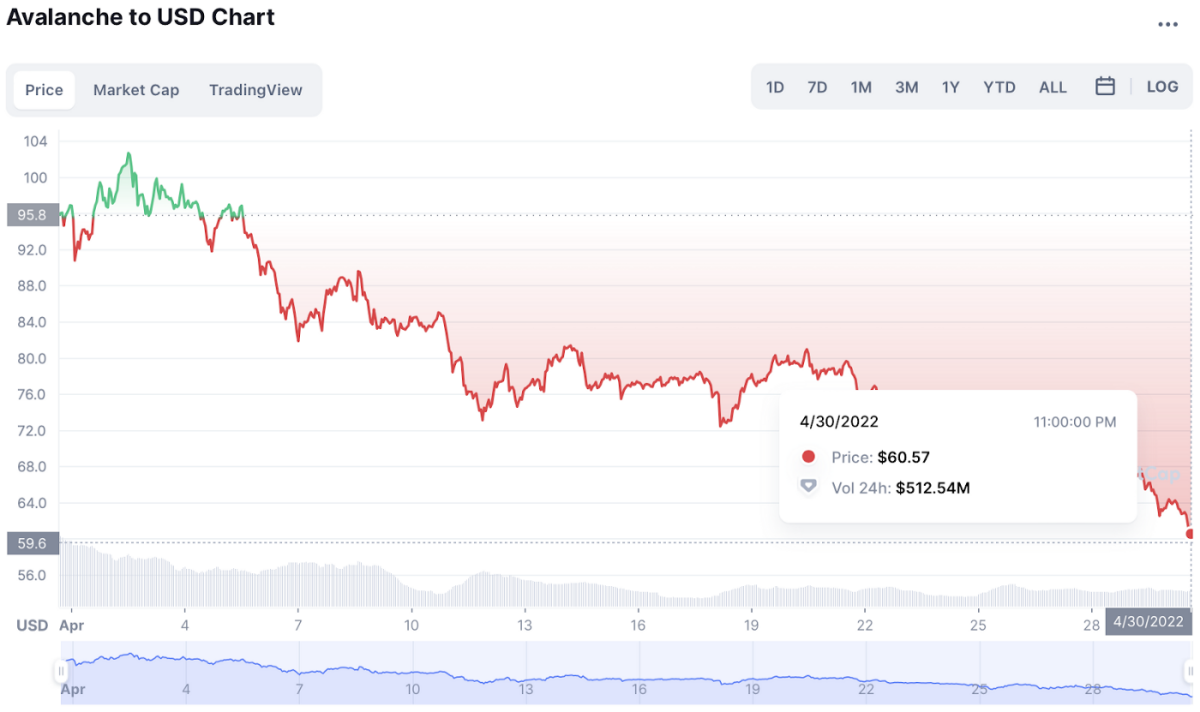 Near started April with a price of $13.20 and ended at $11.20 — a 14% decrease. The main highlight of the month for Near was the announcement by Decentral Bank regarding the launch of its first semi-algorithmic stablecoin, USN. USN is a NEAR-native stablecoin soft-pegged to the US Dollar, and backed by a Reserve Fund that contains NEAR, along with USDT initially. 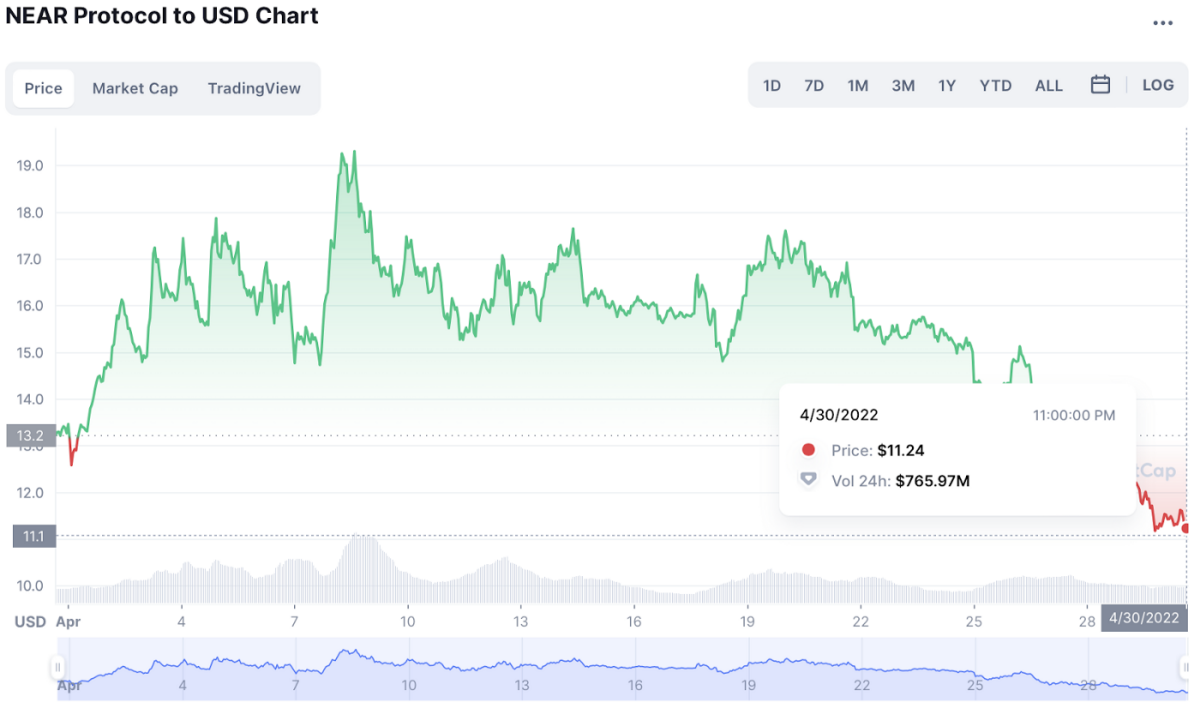 The Internet Computer started April with a price of $20.50 and ended at $13.81 — a 32% decrease. This decrease, along with the other smart contract platforms, is largely attributed to the general market. April was a bad month for all financial markets. One of the significant news stories that came out of Internet Computer was that ex-Cardano executive Eva Oberholzer joined DFINITY’s leadership team as Chief Growth Officer. In this role, Eva will drive the evolution of the Internet Computer ecosystem and bring out its potential as a novel blockchain solution designed to replace the Internet’s legacy tech stack. 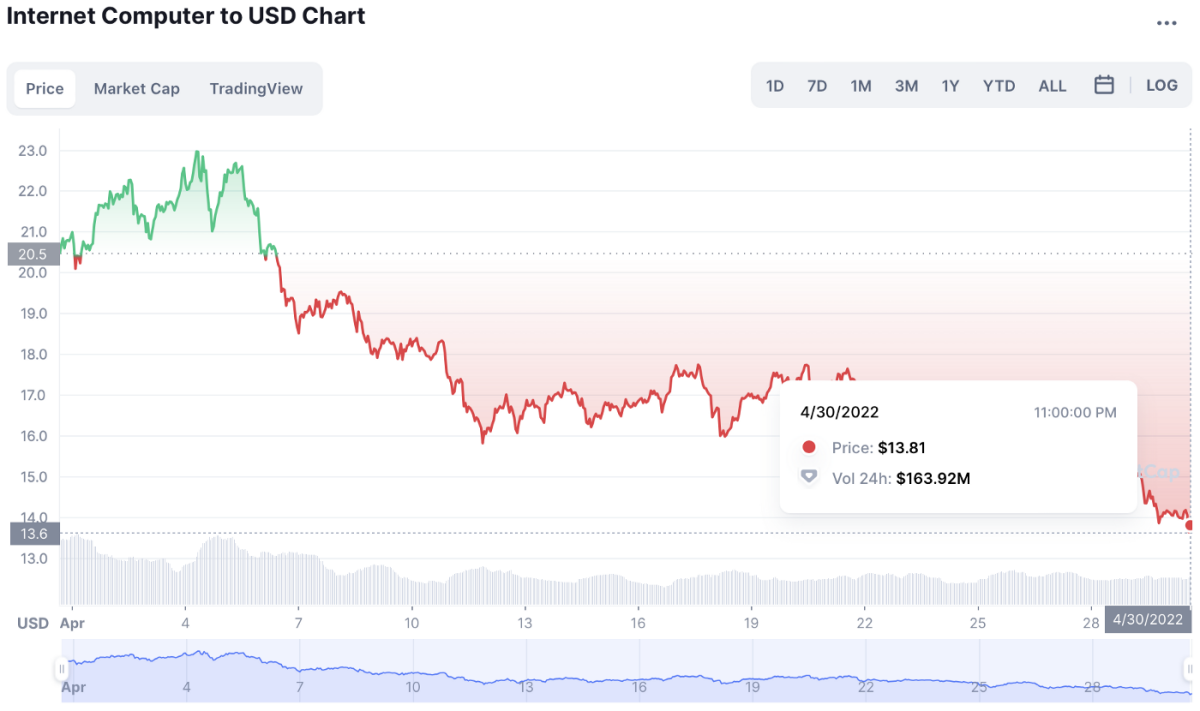