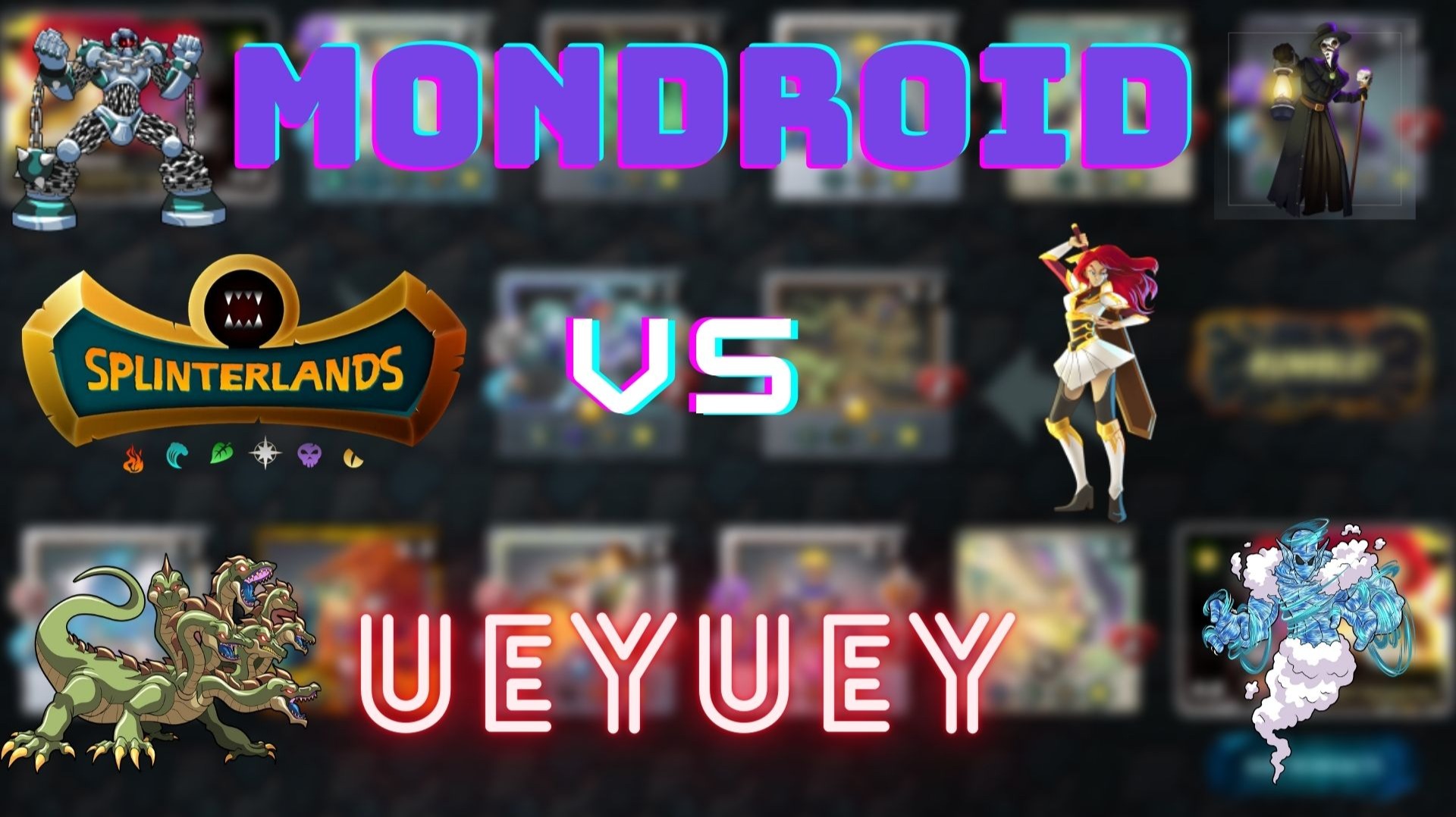 I have an epic battle to show you all today between me and the #1 rated player on the Silver Leader Board, UeyUey. He has beaten me a handful of times while I have never beaten him but today I might be able to get my revenge.

Here's the "tale of the tape" as they say in Boxing. Ueyuey has 338 wins and 22 losses with a streak of 63 wins. I'm such a scrub on the other hand that I barely have more wins while playing 180 more games! Can you believe people think he's a bot... pshhh... they don't call me MonDROID for nothing!

This is my first season going for a place on the leaderboard so I rented a bunch of cards and I'm spamming tons of games and testing a lot of different strategies to find out what works and what doesn't so I'm not exactly stressing over my win percentage as I'll narrow down my strategies and tactics as I get a bigger sample size.

Let me know if you guys would be interested in an in-depth silver league guide going over the must have monsters and team lineups I used once I figure it all out. I should add I'm trying to do this without Legendary summoners but we'll see how it goes.

As for this battle, let's take a look at the rules.

Blast is a special rule active in this battle where each attack does additional damage to Monsters adjacent to the target Monster which is equivalent to main damage divided by 2, rounded up.

What this means is if your front monster gets attacked for three, it'll "splash" two damage to the second monster. It's even worse if a monster in the middle gets hit because it will splash to the monster in front of it and behind it.

battle and as for splinters, it's literally between Life and Death and as you'll see we both decided it was a good time to be alive.

Let's go over the line up!

We both decided on Lorna Shine for our summoner as the Divine Shield she gives everyone will mitigate all the damage from one attack and that includes blast damage.

Neither of us played enough ranged monsters for General Sloan to make sense and Divine Shield is just better than +1 HP from Mother Khala.

I don't know if Ueyuey had access to Chanseus but I sure didn't! For me, Lorna is the go to Life summoner. I didn't set out to play a lot of Chain Golem but this card grew on me because it has both Void and Shield.

In ranked play, you never truly know what your opponent will do and sometimes it can be hard to guess right.

Chain Golem may not be the best option but it's always a solid option no matter what your opponent brings. Is a powerful monster with self heal, flying, and immunity. Because of the blast ruleset, I wanted something very durable in the second position and even though Kralus doesn't have reach, it can still contribute a little bit of magic damage as a duel attack monster.

Once it gets to the front line it can attack with both melee and magic. It also has immunity which can come in handy against enemy debuffs. is not a powerful monster if you only think about it's attack and health but for one mana it will slow the other team which is always important but especially in blast as we want to go first if possible.

With Divine shield and Armor it might even absorb 2 or 3 hits before going down. Is our fourth monster and it brings the powerful Protect ability to our team which gives everyone +2 armor and is a great addition to up our defensive capability for the aggressive blast ruleset.

Magic damage is also really strong here so we're happy to have a little more of it.

For just four mana this is a great addition to any team which is why Ueyuey also played it and one of those monsters that shines much brighter at the silver level. Is another defensive tool with Tank heal to try and keep my front line operational as long as possible.

At four mana, she does add some nice ranged fire power but we're mainly using her for the heal. Is a neutral monster that deals a little bit of magic damage but has some incredibly powerful abilities.

Affliction is very useful for stopping enemy healing and poison adds some extra damage at the end of the round. Getting those procs early will be crucial.

He also has Camoflauge so he can't be attacked directly until he's in the first position. Link To The Battle Here!🍒

When I see the lineups I actually feel pretty good about my chances. I went heavy fortifying my front line and aside from that one Snipe monster all of his force will be directed at my Chain Golem which is great.

We also have the affliction for his hydra to keep it from healing and lasting too long. The Pelacor Conjurer will do a little bit of magic reflect but shouldn't be too bad.

Let's go round by round and cover all the action!

My front line held up well in round 1 and we're still looking pretty healthy overall. The Hydra and Pelacor Conjurer took some decent damage but we weren't able to get poison or affliction from Doctor Blight hopefully that doesn't come back to bite me in the end.

Both of our front lines finally fall, my Venari Crystalsmith was just about to heal the Golem but it died one hit before she got to take her turn!

It's not all bad as we did get rid of the Hydra, Pelacor Conjurer, and The Defender of Truth but it's still too close to call right now so we'll have to go to the final rounds to see the conclusion!

When I saw the results of this battle I knew I had to make a post about it. It ends up being so close that I really wasn't sure who was going to win until the very end.

If we could have done two more damage over the course of the battle it would have put the last archer into the first position unable to attack but unfortunately it's my monster in the front unable to attack after the blast kills Doctor Blight!

There was a big chance to win early on had Doctor Blight poisoned OR afflicted the Hydra in the first round as it got a lot of heals off and lived at 1 HP for an extra turn, instead I didn't get either which is a bit rough but it happens.

Thanks for checking out my battle and ggwp to @ueyuey sama