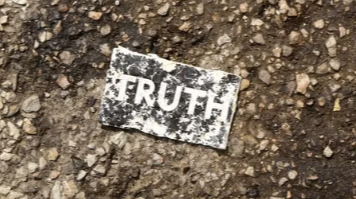 The truth becomes the first victim

We live in always convulsive times, one worrying new after another, almost without time to digest them, to inform ourselves enough to be able to know the situation, or to be able to give an opinion, a free opinion, it becomes difficult. But today I would like to be able to do so, reflect on all this, but well, I imagine that an "outsider" comment can be made far away from the mantras of the political correctness that is proclaimed.

And I begin by saying that you should not blindly believe everything that comes out through the disinformation media, which are private companies increasingly subsidized by public institutions. Only private interests, where is the truth? For example, about what is happening now in Ukraine... in just few days, it has already been seen in a channel of the Spanish Television that they have used images of planes that are actually from a video game called "arma 3" (you can see it on Twitter). Some images are used repetitively, some crisis actors show their hurt and sad faces while others record a video where people were running but they are smiling.

Another channel is using the images of an user but the changed the history. A girl from Donbass saying bye to her father escaping to Russia from Ukrainian attacks. But media said it has been another day in Kiev. (On Twitter - Spanish text but you can click and translate)

Other reporters dressed in war clothes when people are queuing at the post office, some inhabitants foreigners who live in Ukraine deny what they say to the journalist's face, etc, etc. Another new was announcing that a journalist died, poor man, he died twice, also first in Azerbaijan and now in Ucrania... Really? I could add many other links and images... Nowadays the media use tricks with no dissimulation.

Besides, since everyone now understands about wars, we should read the Minsk Treaty, right? In order to know what is happening based on public international law. In addition to taking us back to their history and not to the one that psychopathic politicians stammer to further divide their people, that is what they live by and have always done, they live by confronting people. It's their game, but not ours.

That is not mentioned by the media that have lost all journalistic objectivity and only act as spokespersons for "leaders" who do and undo as they please without caring about any life, neither that of the Ukrainians nor yours.

The media do not mention many facts. Why?
Nor do they mention the fact that this country is an important epicenter of corruption, and human trafficking networks and online pedophilia networks, for example, among other things... Of course, nothing will be said about the shady deals of Biden and Hunter Biden, his unpresentable son to say something, in this country. (Information by New York Post that was censored by Twitter and Facebook).

Nor do they mention that they illegally suppressed the Constitution with the Maidan of 2014, do you remember the Maidan or not? By using the discontent of the people and financing of dubious origin to create a fake "orange" revolution (the colors revolutions, do you remember those?) and like this to change the regime and place a leader more in tune with certain interests, who will be the first to abandon ship but with well-filled pockets. Globalist interests of bad people who never lose, who always get richer with the suffering of many in any kind of tragedy.

For those people, it is just business. (Here a new in Spanish, translated)

In that area the war is during 8 years not started yesterday. Why is not the media telling us nothing about these 8 years of war in Donbass, where local people were dying then by repression of Ukrainian army sent by politicians in Kiev?

I think that we should at least accumulate as much information as possible from both or all sides and then open our minds, think differently, draw our own conclusions and not those that the half-illiterate but well-paid journalist says. It is "almost" funny how almost everyone agrees on the same opinion. There is only one bad guy, it's always the same bad guy. There is always an enemy, out there, so that you forget those who are close to you, those who make your life increasingly impossible, those who tell you how you have to live, how to speak, what to think and what to eat, those who they make you feel guilty for everything that happens, they point their fingers elsewhere, you have to look at the same place, while those from nearby get rid of all free once again.

Panem et circenses (bread and circus) it always works, only now there is a lot of circus and less and less bread.

Before flags or hashtags, there are still many doubts, we have to continue investigating... Nothing is really clear. Perhaps neither are so bad and others are not so good. Do not trust everything.

I have seen a vignette out there, on different social networks too, titled: "The hypocrisy of an outdated world." You can read these posts also on: Read.Cash & Ecency

An always learner of many things with a curious spirit. Me gusta leer y escribir sobre muchas cosas cual polímata del mundo. And I try to write in English too!

The world, the life & me