Based on the data presented in Figures 1-4, Bitcoin's performance and the performance of the top 10 cryptocurrencies are highly correlated (which makes sense considering that Bitcoin is both included in the top 10 and is the most significant asset by market cap in the top 10). The Pearson correlation coefficient (which can be used to define how similar or dissimilar two data sets are) for each of the halving cycles are:

A Pearson coefficient value of 1.0 indicates that the two data sets are identical, as is the case for period of time before Bitcoin's first halving (none of the other top 10 cryptocurrencies had been created yet or had any negligible market caps at the time). The Pearson coefficient range goes from a maximum of 1.0 to a minimum of -1.0; at the minimum, the data sets are perfectly inversely correlated (if one goes up, the other goes down). At zero, there is no discernible correlation between the two data sets.

As shown in the above Figures, the market cap growth that Bitcoin experiences is very rarely bigger than that of the top 10 cryptocurrencies combined. This indicates that an index-like portfolio of the top 10 cryptocurrencies has historically performed better (in terms of market cap growth) than a portfolio of Bitcoin alone. Keep in mind that looking at the problem from the start of each halving cycle is limiting (there would only have been four buy-in events, each either at Bitcoin's inception or at each halving date). 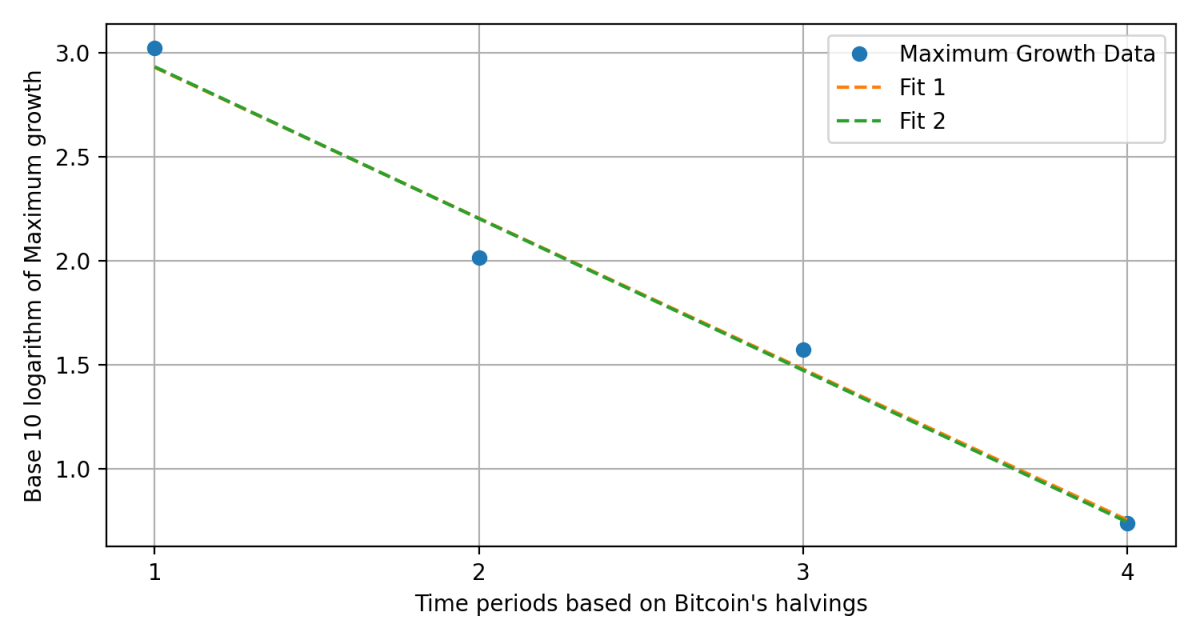 As can be seen, the linear fits are much more similar this time as they are almost superimposed over one another. The expected market cap growth values for Fit 1 and Fit 2 are 569% and 556%, respectively. What is especially interesting about the results is that both linear fits end up just about intersect the data-point for the maximum market cap growth for the current halving cycle. Considering Bitcoin's recent rally to new all-time highs, this might indicate that the market cap has peaked for this halving cycle. On the other hand, new forces (i.e. institutional investors, celebrities, entrepreneurs) are at play this market cycle that might change the dynamics of the cryptocurrency market.

As was found in the previous post, both the market cap growth for Bitcoin and the top 10 cryptocurrencies is slowing down. That doesn't mean that growth will stop altogether, it might just mean that the market is slowly stabilizing as cryptocurrencies are being adopted by more and more individuals and institutional investors. Holding Bitcoin has historically been a great idea, but the data shown above indicates that holding other cryptocurrencies (in addition to Bitcoin) diversifies a portfolio and might yield larger gains.

Comment below if you want to see how a particular cryptocurrency compares against the market cap of the top 10 cryptocurrencies.

If you appreciate the post, please leave a like/comment/tip below. Additionally, if you want to support this work, feel free to donate to any of the following addresses:

Engineer working in the space industry, with an interest in cryptocurrencies and data analysis.

A series of posts that numerically analyze the historical and current cryptocurrency market capitalization trends.