Recently i feel like there's been record number of rug pulls and other types of PnD scams in the space largely due to DeFi and each day passing there are 10-15 new projects just being popped out and people are talking about them. Everyone got their fingers on the trigger and nobody has time for vetting or researching teams behind these projects.

Ever since first Expose series on MyX Network ive been asked to look into more projects that might be possible frauds or scams. I think that will not stop anytime soon, but i am currently reflecting a bit on the matter how many these i actually want to do and is there enough evidence on these matters to justify full investigation?

So This whole UniTrade thing is bit more complex subject on its own. Because nothing is "exactly" wrong with the website or the product (Which we haven't seen real evidence yet of existing tho... and github is indeed also private...) but more about whose behind it. 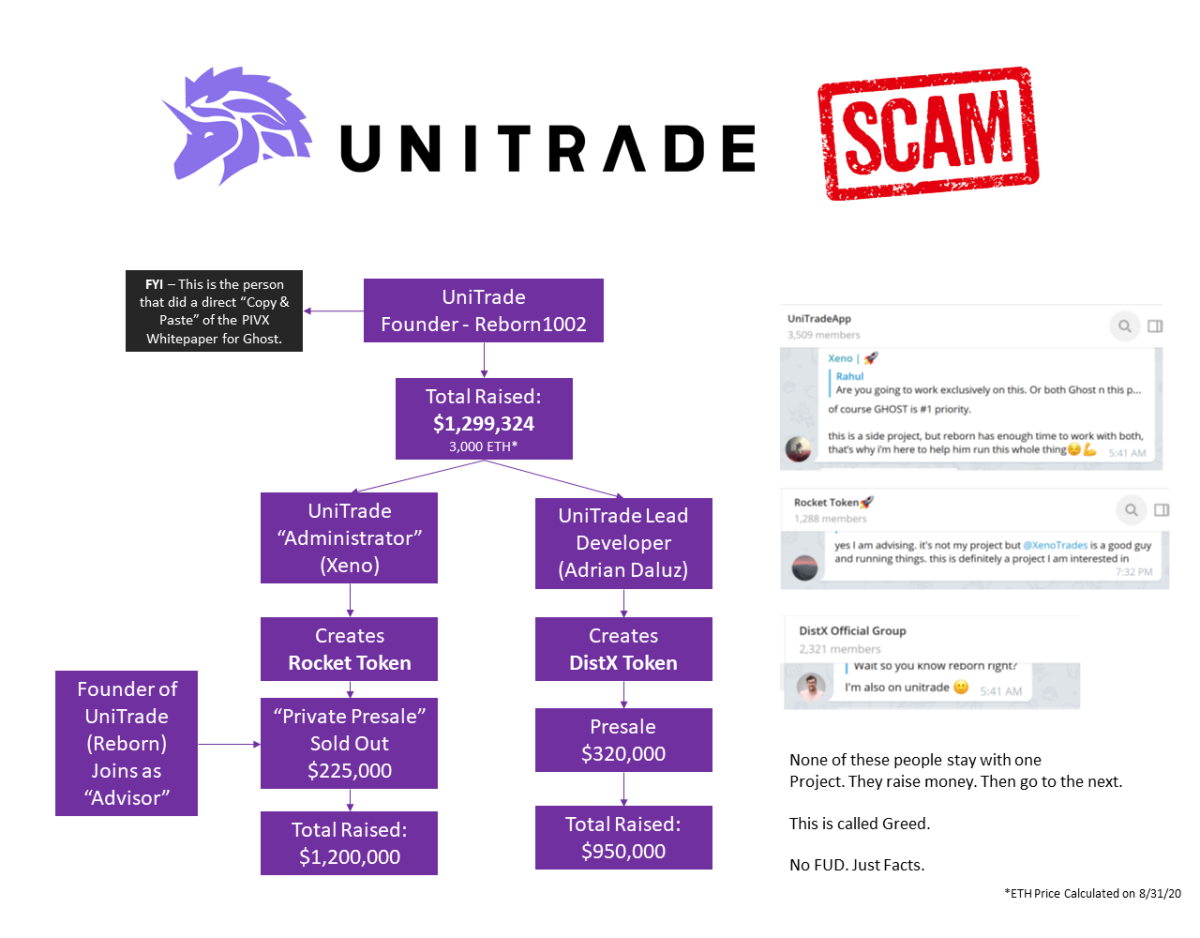 Since the video is so long already i don't feel like writing absolutely everything on text format, but key figures here behind unitrade Reborn1002 and Adrian Daluz have worked on prior projects known as Switch and GHOST, which GHOST basically died out after John Mcafee bailed out from it and blamed Josh (Creator Of Switch) for not putting his full time into that project, since he was managing SWITCH and maybe something else in the meanwhile as well.

This is a very long list of projects and i'm not exactly sure can you trust person to deliver on these things when he wasn't able to meet many of the initial things that Switch was promising to people. GHOST also fall apart due to Josh and before John Mcafee left the team Reborn1002 was already building UniTrade despite being sort of charge of GHOST, since Josh was gone.

Then you have these logs between a 3rd party and Adrian basically saying shit talk regarding Unitrade  and bailing out to work fully on his next project which he got nice chunk of money raised (see above DistX) which is basically a more improved version smart contract wise over LID protocol pretty much.

So what it seems like this team has no developer and they are out sourcing that stuff according to Reborn1002 and i'm not exactly sure from whom and how capable they will be. But based on prior track record of these dudes they kinda failed to deliver on GHOST and Switch when they were working on them and thats always something you gotta understand. YES projects can fail, but that should be due to a marketing fuck up or hack perhaps, not because devs were lazy to finish the code.

There is couple of investigations on Reborn1002 addresses right now among other TXID stuff that is going on. There might be other article follow up on the matter later, which addresses more tech side of the things.