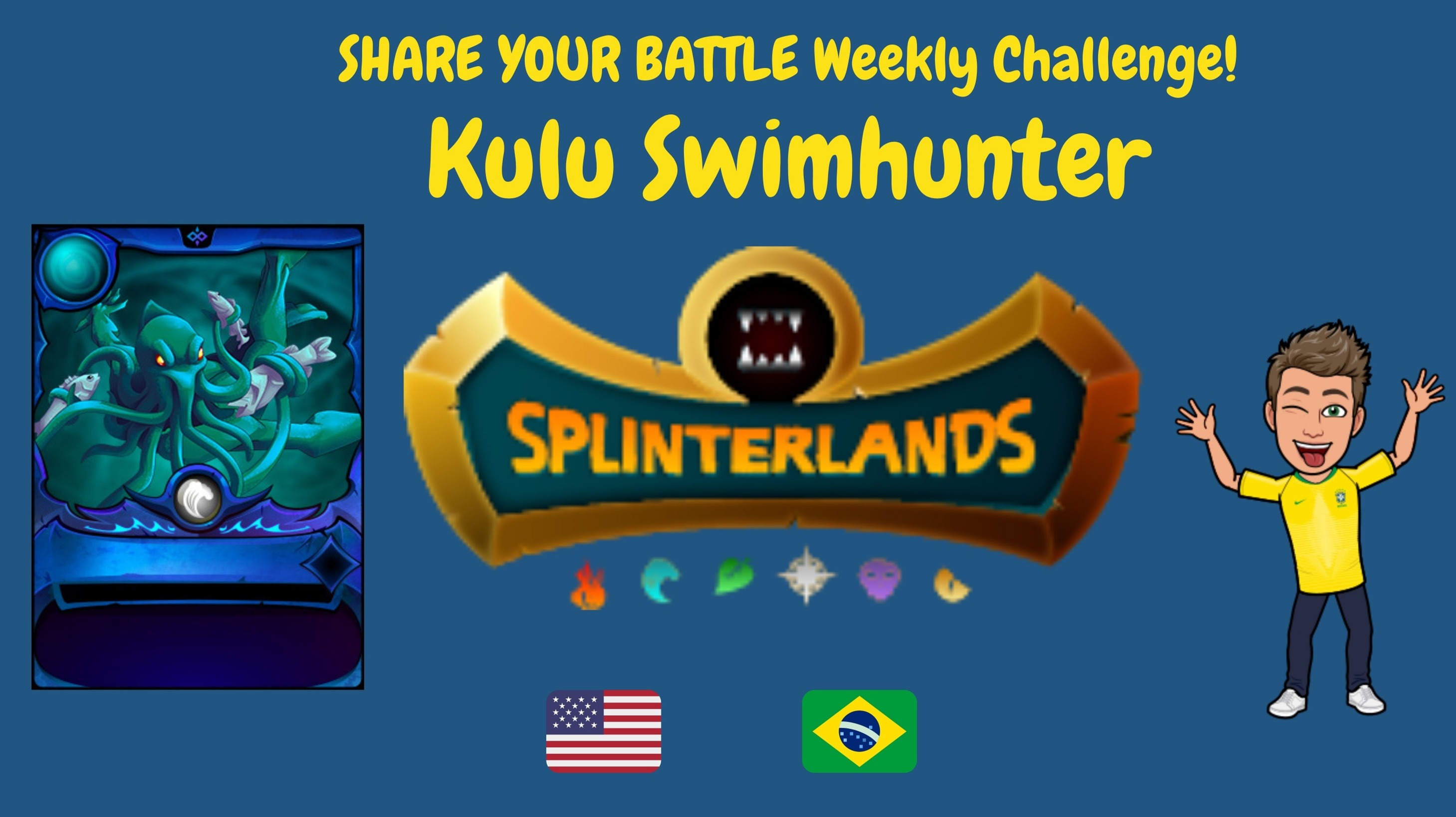 Hello Splinterlands community! All right with you? I hope so!

Today's weekly challenge is with another card from the CHAOS LEGION expansion, Kulu is part of the water summoners cards 💧. For one that costs 4 mana the Kulu Swimhunter has more very good stats, but on the other hand he doesn't have any abilities, even at high levels.

As the rules of this battle prevented the use of earth and death summoners, I considered that there was a high chance that the opponent would choose meele or ranged type attack based cards. For this reason my strategy was to place the **Serpent of Eld** in the first position. This card has the ability **Dodge** which increases the chance of evading meele or ranged attacks and also has 4 speed which becomes 5 when receiving the water summoner's buff. This card also has 3 meele attack, 5 health and 2 shield, which makes it very strong especially if it doesn't face opponents with magic attack.

If my strategy works the **Serpent of Eld** will receive several attacks and stay in the battle until the end. When she starts taking damage to her health, she will have the support of **Merdaali Guardian** who will heal her.

Meanwhile **Ice Pixie** and **Kulu Swimhunter** will be attacking freely and draining opponents' health. **Hardy Stonefish** was chosen last because it costs 1 mana and will serve to protect the **Kulu Swimhunter** from attacks from behind for a few rounds.
https://i.imgur.com/M8ZUCvK.png

The battle started with this formation.

In the very first attack the enemy's **Radiated Scorcher** was defeated. The **Serpent of Eld** couldn't dodge one of the attacks and lost the two shields it had.

At the end of the second round I ended up losing two of my cards to **Ice Pixie** and **Hardy Stonefish**, the opponent didn't lose any of his cards this round, but he had to watch his **Living Lava** suffer 3 damage, lose your shield and still miss your attack on the **Serpent of Eld**.

In the third round, the enemy's **Living Lava** took 3 damage and missed the **Serpent of Eld** once again. My other cards have lost their shield and will start the fourth round unprotected. This shield that the water summoner gives to his cards is sensational!

The sixth round ends with the **Serpent of Eld** doing 3 damage to the **Tenyii Striker** and the **Kulu Swimhunter**, main actor of this post finishing the battle.

It's wonderful when your strategy works from start to finish! The **Serpent of Eld** dodged numerous attacks as I had predicted and also as I had predicted, the **Kulu Swimhunter** was free to inflict damage on enemies thanks to the protection of the **Hardy Stonefish** and the shield you received from the summoner.

Hugs, and good game to all!

Hello P0x community! this is my blog in the community where i will talk about blockchain games and possibly other curiosities hehehe!