Shaman King, Ep. 16 Review - The Power of the Pompadour Compels You! 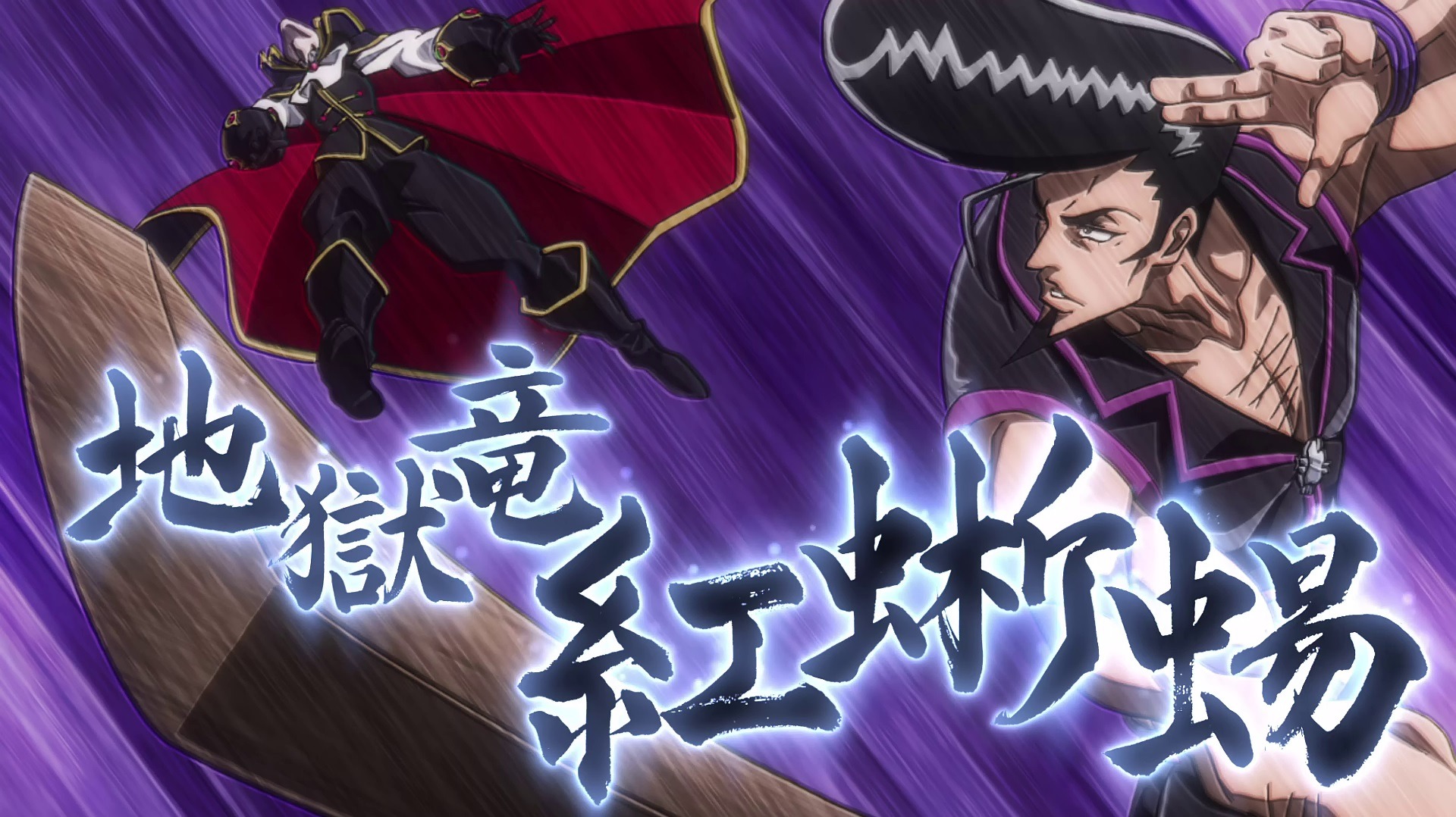 Shaman King, Ep. 16 Review - The Power of the Pompadour Compels You!

Last week, the Shaman King anime featured two major developments. Anna learned about Hao Asakura's history, tamed his Shikigamis, and headed off to the US to deliver Yoh the Cho-Senjiryakketsu. Meanwhile, Horohoro had his own personal journey after he had a snowboarding accident and met park ranger Bluebell. He befriended the bear, Apollo, who Bluebell and her father rescued years ago, but the bear soon died from a group of hunters who Horohoro stopped.

I was very impressed with the episode to the point that I deemed it my favorite one, thus far. The way Horohoro looked in his black battle outfit was really cool and the way he avenged Apollo's death was, to date, the most badass moment of the series. On top of that, the music was top notch. Now that his sidestory is over, will he and his friends finally find Patch Village?

This week's episode adapts Chapters 95 through 100 of the manga.

After Horohoro rejoins the party, the group reaches the place Lililara's map marked, Mesa Verdede. Initially, it appears that they went to the wrong place because of all the tourists, but they soon found a portion of the village that had a "Keep out" sign. Ren tries to cross it before the group is interrupted by some of Hao's followers. 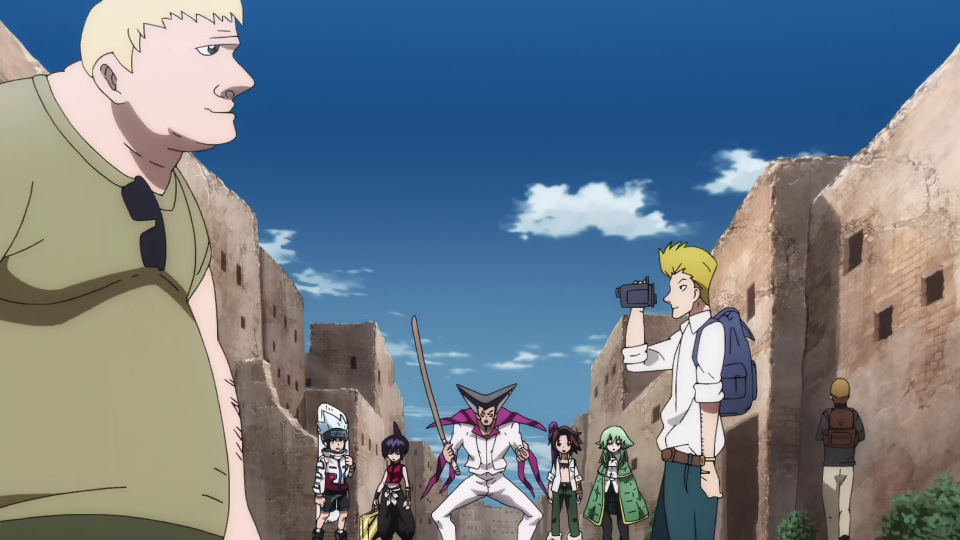 Yoh and his friends confused at the number of tourists at Mesa Verdede. 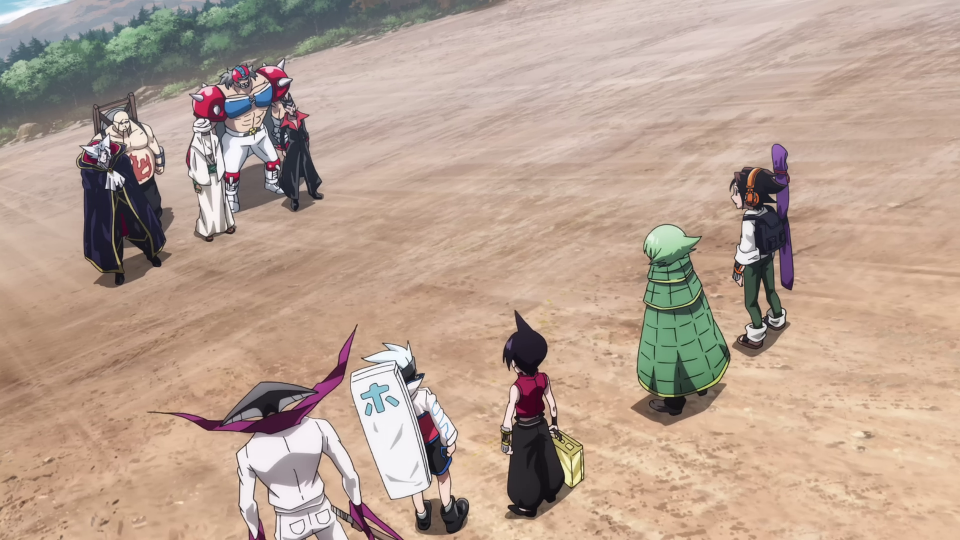 Mohamed, the one wearing the thwab, says that they will kill Yoh's friends before Boris bites Lyserg in the neck and knocks out Ryu (and ruins his hair, too). Boris introduces himself and his spirit, Blamuro, claiming to be a vampire. The situation takes a briefly comedic turn when Horohoro points out that Kouji looks more like Dracula and laughs at him. However, Boris actually kills Kouji and uses his bat wings to drain his corpse of all his blood, terrifying Yoh, Ren, and Horohoro. As Boris attacks Yoh and company, Ryu punches Boris in the face and restores his pompadour. 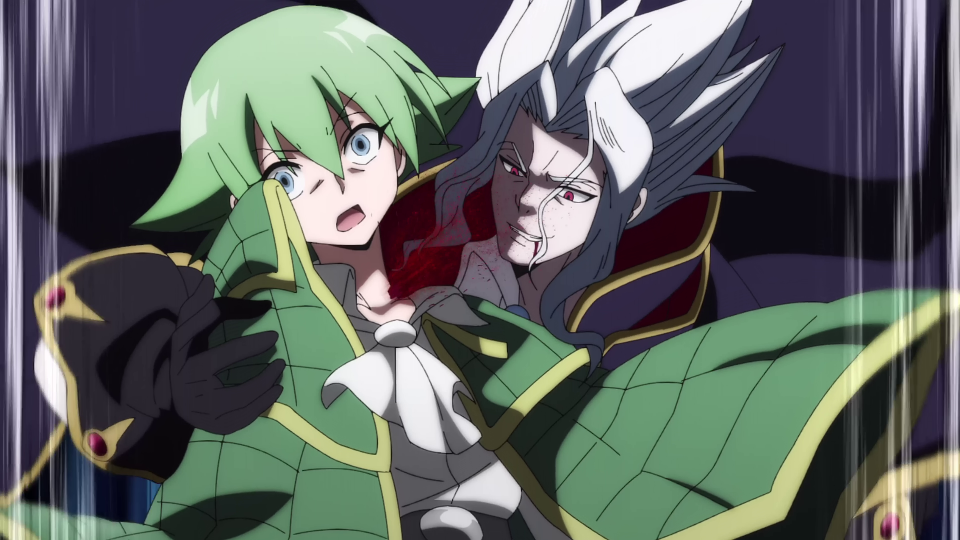 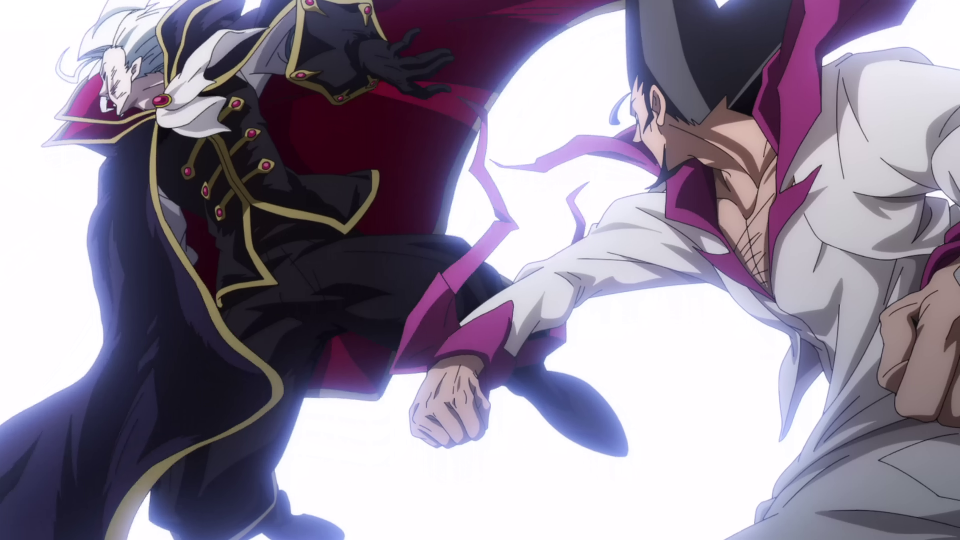 Ryu punches Boris to get back him for knocking him out.

The anime briefly cuts to Manta, Anna, and Tamura riding a helicopter to Patch Village thanks to Manta's connections to his father's company.

Meanwhile, Ryu and Tokageroh knocks Boris back. Boris uses his bat wings to fly and attack Ryu, but Ryu uses Tokageroh's snake hair to restrain and crush Boris' wings. However, Boris' blood turns into a pair of vampire bats, which swarm around Ryu and drain Ryu's blood. Tokageroh runs off in light of the sticky situation. 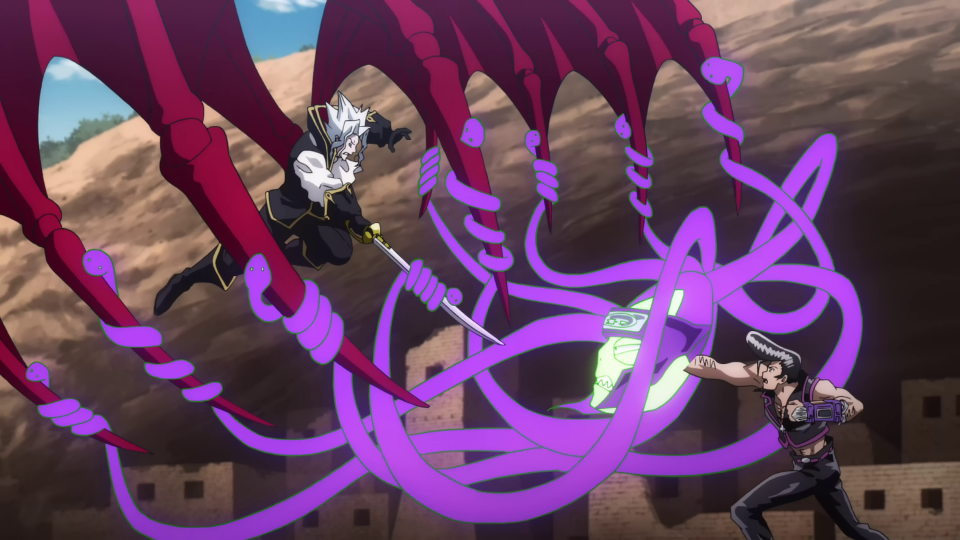 Tokageroh's wimpiness actually turns out to be a ruse as he sneaks behind Boris to figure out his Over Soul medium, which is his blood. Boris explains the history of Vlad the Impaler, his ancestor, and how his family were persecuted and hunted by "vampire slayers" as a result of false legends that arose from Vlad's ruthless tactics against the Ottoman Empire to defend Wallachia, Romania. 500 years ago, Hao, as a Patch member, encouraged his family to embrace the vampire narrative, and taught his family shamanic powers to fight back and get revenge against their persecutors. In fact, Boris's spirit, Blamuro, was a "vampire slayer" who got captured and badly tortured before Boris enslaved his ghost. 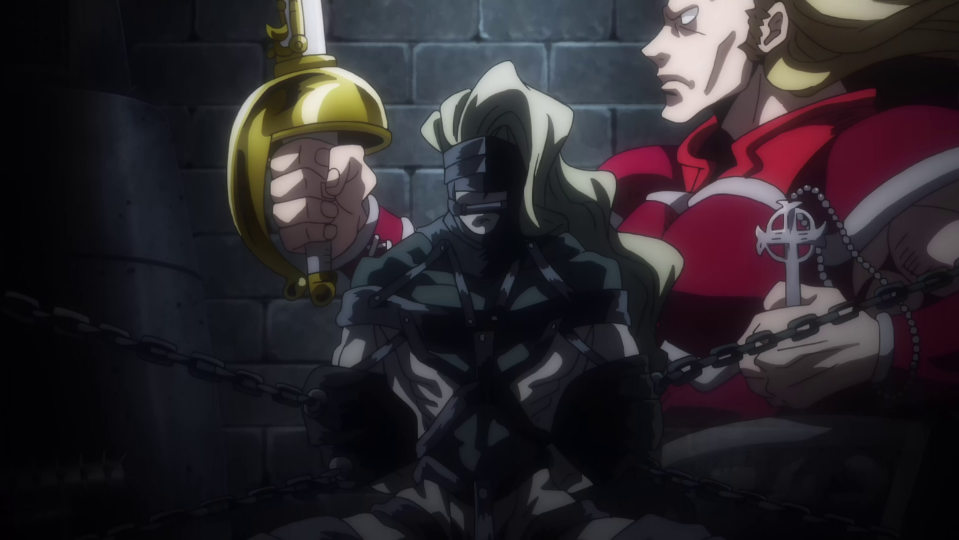 Blamuro in a torture chamber with a silhouette of what he normally looks like in the background.

Suddenly, Lyserg holds Yoh down as he is possessed by Blamuro and holds Harusame to his own neck. Meanwhile, Boris prepares to kill all of Ryu, Ren, and Horohoro with his blood-made spikes to put the group in a death-or-death situation. As Boris releases his spikes, the gang successfully stops them. Flustered, Boris orders Blamuro to kill Lyserg, but Amidamaru managed to bring Blamuro back to his original personality and betray Boris. The episode ends with Ryu preparing to unleash his ultimate attack. 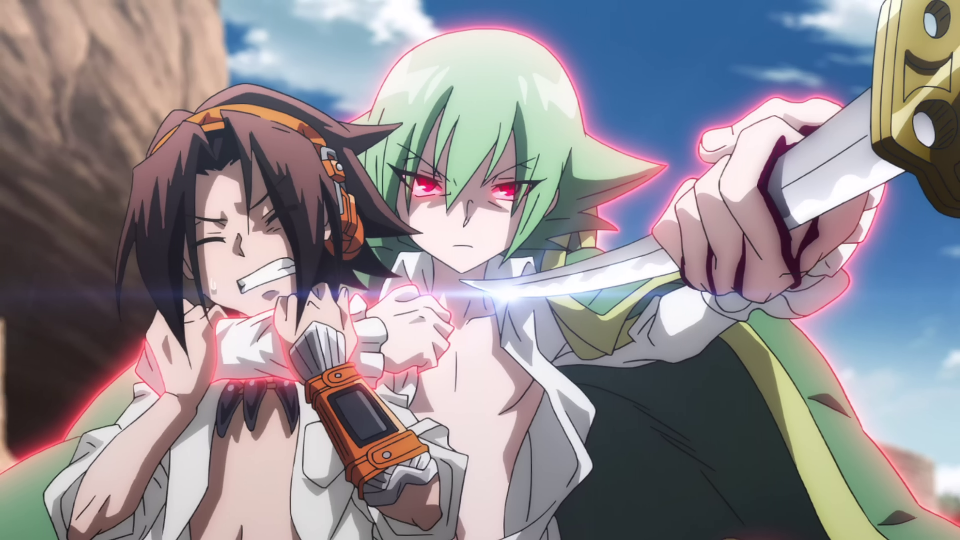 Lyserg, possessed by Blamuro, restrains Yoh and prepares to stab himself with Harusame. 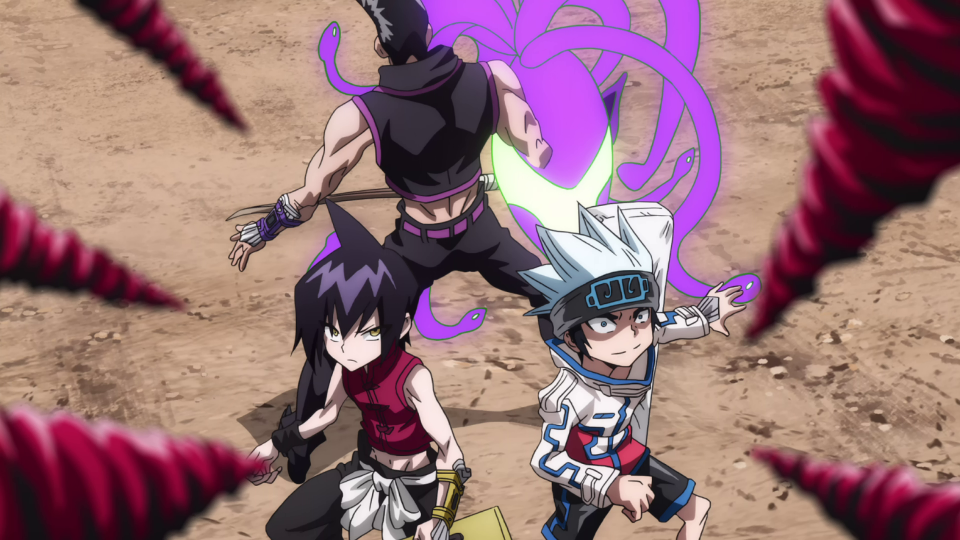 Boris about to drop the blood spikes on Horohoro, Ren, and Ryu. 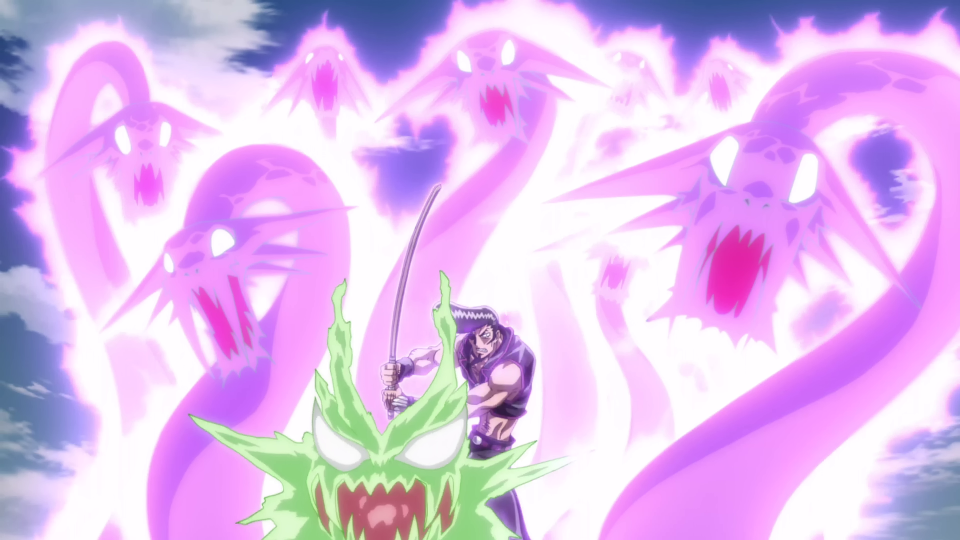 Ryu prepares his ultimate attack. People familiar with Japanese mythology might recognize this.

The overall execution was solid, though a little unspectacular. To get the negatives out of the way, the anime left out the part where Boris's blood spikes were actually made from killing innocent bystanding tourists. I guess I shouldn't be surprised considering that the anime has already omitted some gruesome scenes like in Episode 7. However, just like how it reduced how scary Faust VIII was in Ep. 7, the omission of the scene reduces how scary Boris can be, especially when we already see him killing one of his own allies and sucking out the blood of the corpse. 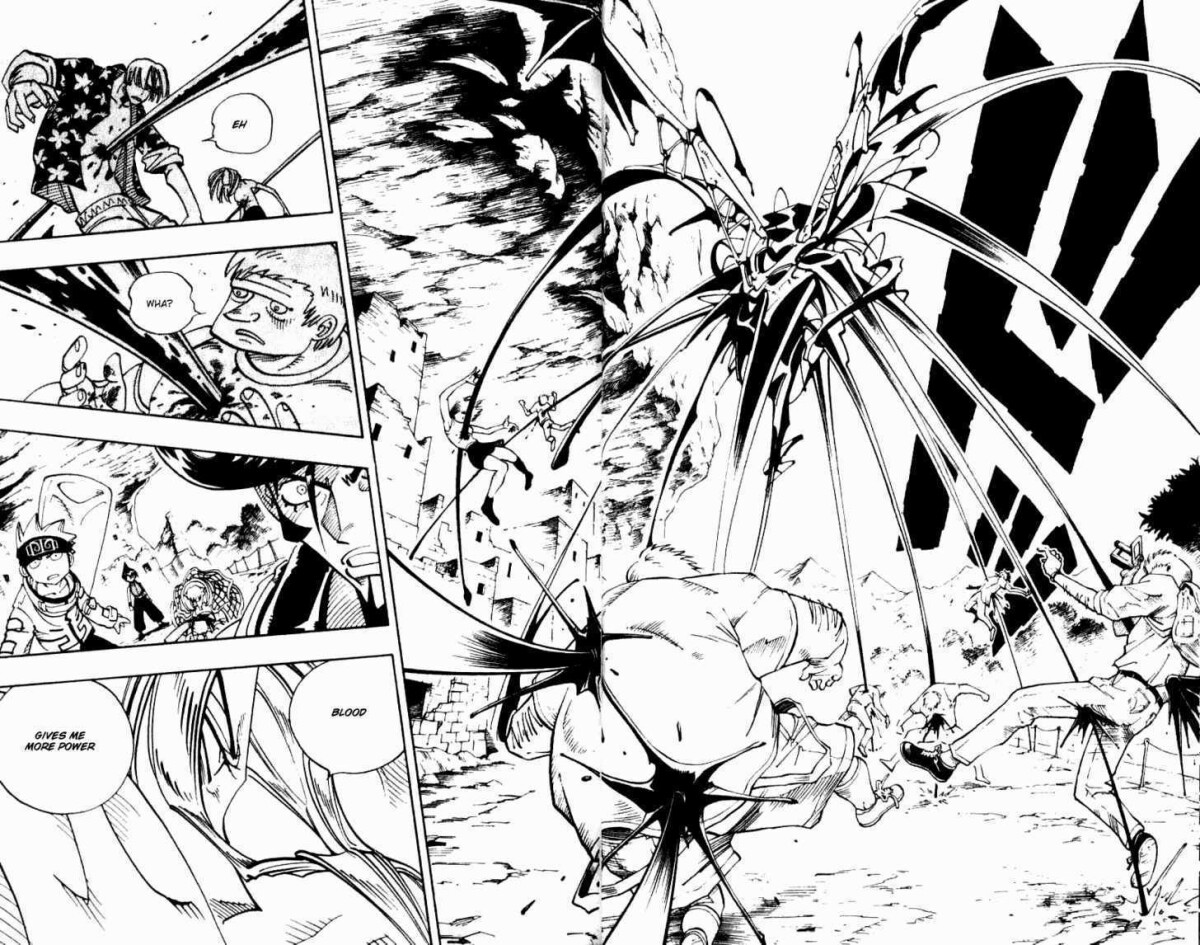 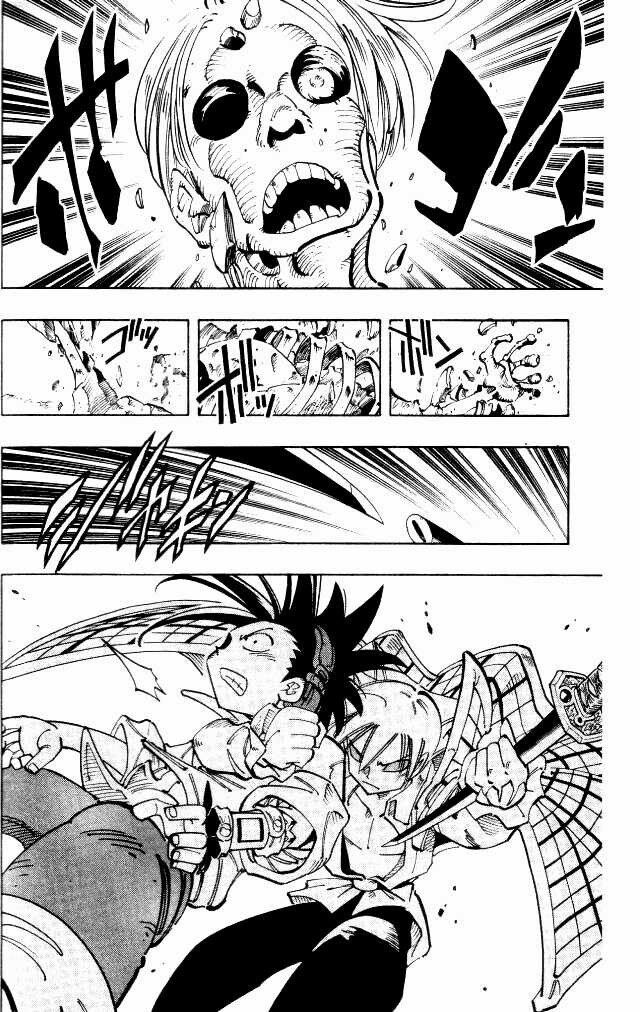 This is what the anime left out.

Another negative to point out is that the drawing quality was a bit inconsistent at the beginning of the episode. The far distance drawings of the main characters appeared rough. In addition, the drawings of the random tourists at Mesa Verdede looked a little sloppy. For instance, if you look at the first picture, the tourist with the camera has his left eye drawn too far back.

However, there were more positives than negatives. While the animation is still a little slideshowy, there were some dynamic moments throughout the fight and the fight looked overall better than the Lyserg episode. Ryu, in particular, looked incredibly sharp throughout the episode. Plus, the voice acting for Boris was extremely good.

I also find it really cool how Shaman King incorporates history into its story. The way Boris incorporates Vlad the Impaler's actual history with the fictional elements of Dracula the Vampire felt very seamless and not hamfisted. On top of that, author Hiroyuki Takei is able to meld all of that with the Shaman King lore pretty well. My only complaint is that in the anime, for some reason, it used the Gaelic cross when it presented Vlad's tomb when Romania is Eastern Orthodox. I'm not sure why it was there as in the manga, it used a regular cross which would be more historically accurate.

That said, my favorite part of the episode was actually when Horohoro pointed out that Kouji looked more like Dracula than Boris. Seeing Boris get really pissed as Horohoro laughed at him was pretty funny. However, it was even funnier when Ren made a subtle 4th wall break: 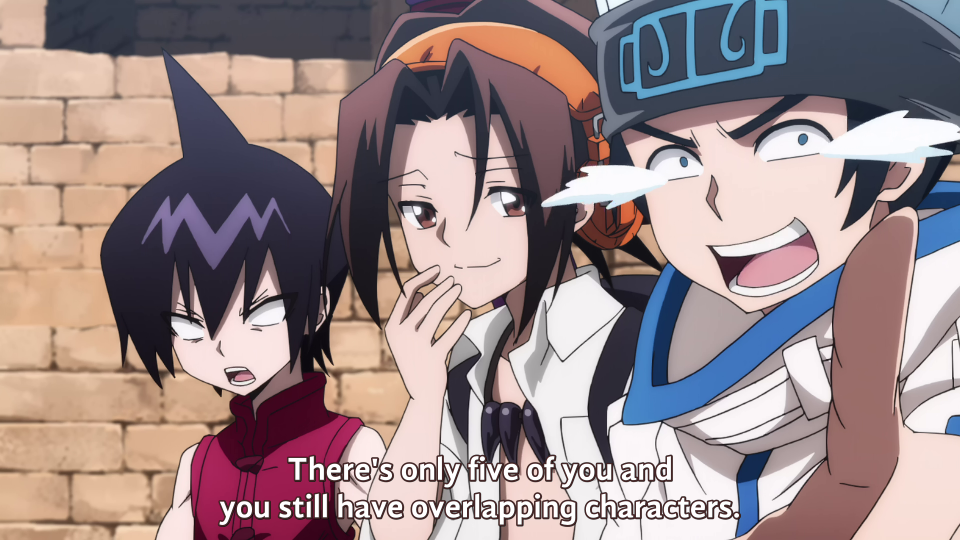