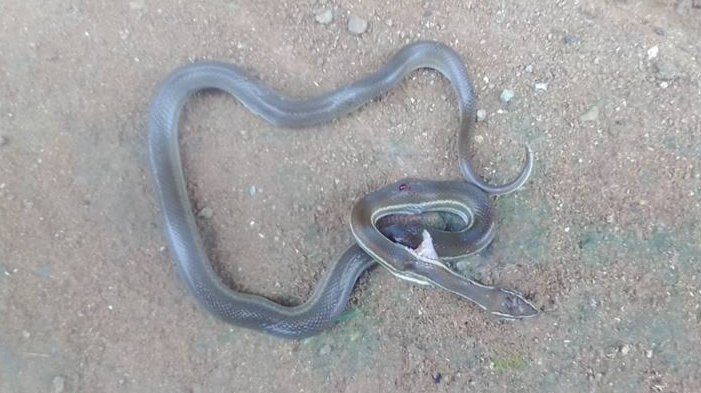 The Snake That Wanted Some Rabbits

The reason I decided to practice my rabbit farming in an enclosed hall type structure was because I didn’t want to be worrying about snakes, rodents, mosquitoes and insects attacking my rabbits. I built mosquito nets to cover every opening so that nothing gets inside except that thing is a human being that knows how to open the front entrance door.

I went about my usual routine yesterday and one of the things I do in the weekends is to open the entrance door to the rabbit farm and feed them. So I went to feed them yesterday morning immediately I opened the door a snake fell off the door, apparently it was looking for a way to get in but there was had not been successful as there is no big enough space to fit or pass through.

I acted fast before it could run away and live to fight another day, I sent it to its ancestors. RIP. I do hope another snake doesn’t wonder this way, this is the first time I have seen such attempt by a snake to enter the rabbit house and I hope they get the message that they can’t get in.

Where did it come from you might ask? There is a canal on the other side of the residential area where I live and the last rain that fell caused a lot of flooding which caused the residents in that area to evacuate. There were loads of report of snakes entering peoples’ houses and going on the roads, I think this one must have missed its way.