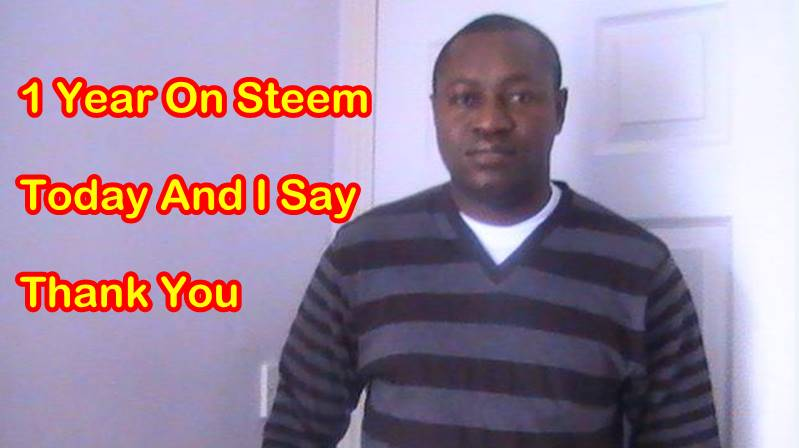 1 Year On Steem Today And I Say Thank You

During the first week of waiting I was really very excited, I was used the time to learn loads of stuff about the platform, I read a lot of post and learned loads of stuff. I even watched loads of Youtube videos about Steem all in a bid to hit the ground running when I am finally approved.

As the days turn into weeks I almost lost interest, almost I say because I wasn’t reading and researching the way I was doing the first week. “What if” thoughts started going through my head. What if I don’t get an approval email? What if I nobody reads my post? Yeah. I had left the trending pages were I was seeing double and triple digit post and discovered there were post with less than 10 upvotes valued at $0.00, nobody commented on them and most of the account owners had been here for more than a year. In my country Christians are quick to shout “It is not my portion”. Lol. And that was what I said inside of me because I couldn’t imagine putting all the efforts all for nothing.

By 3rd September when the email finally came announcing my approval, I was actually sleeping when my phone buzzed to announce the arrival of an email. I rolled over and checked who the message if from, Steem, ok, I dropped my phone and went back to sleep. Lol. I just didn’t want any disapproval to stop me from getting a good night sleep. Lol. By the morning I was quick to read the content of the email and sure enough I got approved. Yeepee, talk about on-boarding new members faster, I don’t think I fell into that category. I didn’t know about paid account opening options that would have made things faster for me then was my mistake.

So my account was approved, now what? I thought to myself. An introductory post! Yes, that is what I had to do. But, there was an official job at hand at that time that kept me very busy so I had to round it up before starting on this new journey. I finally introduced myself to the community on 7th September 2018. You can find my first post introducing myself in the link below:

I received 44 comments, 48 upvotes and a upvote valued over $7+ at that time, for some reasons it is showing about $5+ now. What excited me the most was when I received an upvote worth more than $6 from @postpromoter (@yabapmatt) and then a comment from @reseller stating that I got such upvote because I won the New Steemian of the Day. You can see the comment and snapshot of the award below.

Welcome to Steem @ketcom! I make a daily news video called the steemit news minute and have chosen to feature you as the new steemian of the day! We hand-pick some of the best new users each day and give them a jump-start to success on the platform. This post will be given more exposure on the platform to grow your following plus some nice upvotes to get you started sponsored by @yabapmatt and the @postpromoter content promotion service!

Check out the Video Here: https://steemit.com/news/@reseller/6ivf05yr Today marks exactly 1 year that I made my first post on this blockchain.

I was really grateful to @reseller and @yabapmatt because they gave me the needed boost to go ahead and do my thing here. As I continued posting I started seeing my post listed on different selected list for been good and that drove me to even do more. The second post wasn’t like the first though because I don’t think I got up to $0.06, which was great compared to some I had seen. Lol.

I understood that encouragement can really drive members to bring out the best in them so I decided I really needed to boost my account beyond what I have to help encourage other members and that is what lead me to start leasing SP. So have been spending a lot money to lease SP not to upvote myself 10 times a day, or create multiple accounts and upvote them once daily for all 10 accounts. Lol. Things people do. Nah. I was voting members I saw had great contents and many of them I consider as friends today. I felt they were doing great stuff on the platform but were not really getting the recognition they deserve.

Leasing SP allowed me to also free my own SP which I could delegate to different communities and DAPPs. At some point 97% of my 1,600 SP were delegated to different projects and I still had leased 10000+ SP to continue curating members post. So, I didn’t start leasing large amount of SP because of the 50 / 50 stuff, I was already doing that before HF21. HF21 has however provided an opportunity and I have been increasing my leased SP to reach more members and also increase my own SP.

I have been reading a lot of members post and I tell you it ain’t an easy task. To come back from work sometimes feeling very tired and having urge to just hit the sack, but still find the strength to pick up your phone, read and comment on a members post to celebrate, encourage, learn and even question stuff you don’t understand is a great sacrifice which I ain’t complaining about.

As time goes by, these members have become friends like I said you know stuff about them more than you know about your next door neighbors. Lol. Remember, they live thousands of miles away. I am indeed grateful to the management of the Steem Blockchain, developers, communities and everyone that has contributing in one way or the other to make it great.

I initiated the @upvotebuilders community in February 2019, because I felt that I needed to encourage good content creators to came together so that we could have the power of a Whale and create an effective impact in curating content for our members because there is power in unity and it didn’t matter if you considered yourself a little account owner, if we came together, we can do great things.

The @upvotebuilders community is not there yet, we haven’t scratched the surface yet when you consider the possibilities, but we are progressing and that is important. Members delegate to the community pool and they are upvoted based on their membership level, we have contests that help promote interaction and encourage members to engage and support other members. We have the Member of the month contest where the winner nominated by other members wins 1 full upvote for the month they won it, there is also the next level upvotes for which winners receive the next level upvote for 2 weeks. Starting 9th September we’re re-introducing sharing of 30% power down income with members.

I have such great people supporting me in all ways I can only imagine. I read some post and laugh, I read some post and I shocked and amazed, I also read some post I am sad because a friend has had some sad news come their way, but I am happy that with time that sadness goes away and happy times returns again. That is life for you and having people to always see you through them is something special which money can’t buy.