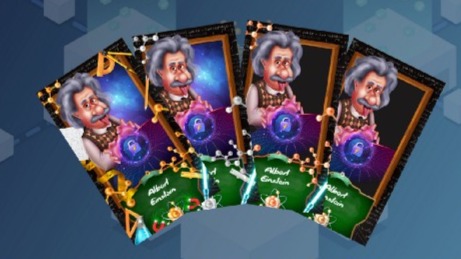 For all you Boid fans out there, and honestly, science fans too, it is time for the second release in the Boid Scientists NFT series. As introduced in Boid Breaches Barriers Offering the First NFT on EOS with Real Utility, the Scientist Series NFT’s not only do these cards look cool, but they have a utility value than can boost your Boid account powered stake. For those new to Boid and this NFT series, please do check in with the previous article to learn more about the overall mission of Boid, and the backdrop between the Scientists Series NFT’s.

For those that participated in the first Boid NFT Scientists Series Tesla auction, there are a few updates to how the second Einstein card auction will be structured.

First of all, the last auction allowed for a pool of EOS based currencies to be chosen from as donation incremental increases. For this auction however, mainly because Boid has decided to release the Einstein card on the WAX blockchain, only WAX will be accepted.

Another key difference is the overall auction and event structure. The auction itself will not in fact be for the Einstein NFT, but rather for a single Boid NFT token that will grant those with them in their possession at the end of the event the Einstein collectible card.

Basically then, the auctions will kick off on March 8th 2021 at 12:00 GMT on Atomic Hub. In fact, there will be ONE Boid Token NFT auction beginning every 12 hours and lasting for one day. In other words, for the majority of the event there will be two Boid token auctions ongoing at the same time, albeit staggered. The total number of Boid Token NFT’s up for grabs are 36, meaning the auctions will run for about 18 days with a new one beginning every 12 hours.

As for the price, well being it is a series of mini auctions the only thing that can be known for certain is that the minimum bid price for all the pre-mentioned will start from 333 WAX.

In total there will be 200 Einstein cards distributed to the holders of these Boid Token NFT’s: 20 Gold, 40 Silver, 60 Bronze, 80 Brass. The distribution or drop model will distribute each Boid Token NFT hodler a total of 5 random cards with the only standard that each person will receive at least 2 Brass cards. It should also be noted that although both the rarities and mints are randomized, mints 3, 20, 30, 40, 50, 60, 70, 80 will not be included in these airdrops and instead withheld for the Boid team.

To view the Boid Token and Einstein NFT’s, please check the following links

As for what happens to all that WAX, well the whole reason we are doing this is to provide value in multiple ways to the underlying Boid ecosystem, and so that WAX will be utilized to fund future developments of Boid while at the same time the NFT’s benefit those in the Boid ecosystem itself. Specifically on this last point, these Einstein NFT’s when held in your wallet will give a bonus to Max Powered stake, a very important parameter in Boid.com that can increase the mining possibility well participating in Boid Mining as well as increasing the Battery capacity for the upcoming BoidVoid Game currently under development. It is worth noting here as well, that the previous Tesla NFT hold completely different attributes, so please do not confuse the two as being the same.

And that good ladies and gentlemen is about the most simple gist we could provide you on the items, mechanics, and reasons behind this auction. Should you have any questions please utilize one of multiple official ways noted below to reach out and get answers. On that note then, just a giant thank you for all of your support in everything we here at Boid are focused on with our mission, as truly we would not be able to do it without the community behind us. And of course we really do hope you enjoy the new artwork and auction structure we have put together for the second Einstein Scientists Series NFT auction on Wax.io’s Atomic Hub.

For more on Boid visit the homepage at https://www.boid.com/

Keep up to date by subscribing to Twitter (https://twitter.com/boidcom).

Reach out, contact, or interact with Boid through Telegram (https://t.me/Boidcom_official) and Boid Community Page (https://community.boid.com/)

May the Boid be with you!! 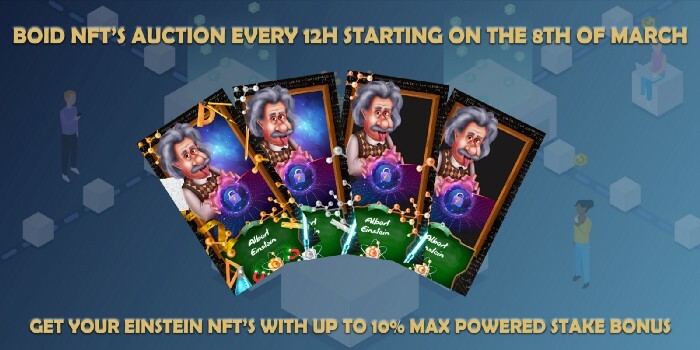