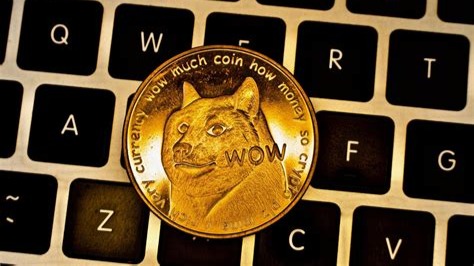 I executed a nearly perfect dip-buy (@ $0.52 cents/coin) on DOGE Coin today - here's how I did it and a strategy on how you can too.

As DOGE slowed just before reaching 0.70 cents per coin, I was expecting a dip.  Here's how I executed a nearly perfect limit buy on the dip that followed to increase my position.

I've been watching DOGE a while (see my article here: DOGE bought under 1 cent). I've seen all the ups and downs and recognize good times to dip-buy. To execute a good dip buy, you need to recognize patterns, and to recognize patterns you must become familiar with DOGE beyond just the last hour, week, or a few days. Go back and study the charts in detail.

Once you have an idea of patterns, you need to monitor DOGE price increases during runs like these. Eventually, DOGE finds a ceiling and cools a while, consolidating before running again. Today, DOGE started declining a little from just under 0.70 cents so I decided it was time to initiate a limit buy expecting a good dip in price. By the way, I m not a financial adviser.

A limit buy is key to maximizing a dip opportunity to buy DOGE. A limit buy is when you make an order to buy, but only when the price hits a certain lower level as it declines. For example, say you want to buy DOGE if it drops to 0.25 cents per coin. Your limit buy would kick in only if it hit that level or lower. Also, the exchange requires willing sellers and enough time to execute your trade during the dip period as well to execute any trades in line in front of you. 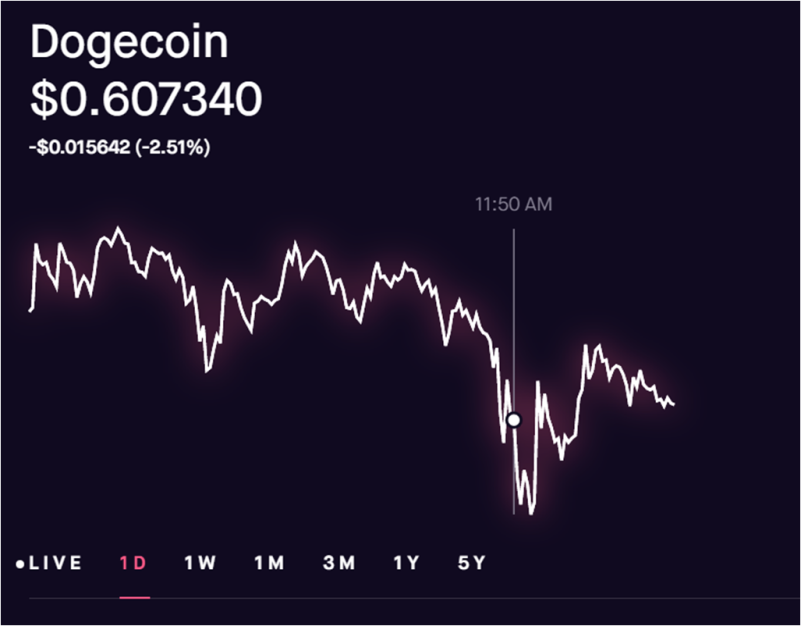 Interestingly, just looking at the daily graph below without candlesticks, you would think my order never got filled, despite a large dip just after I placed my order as the graph never shows it declining to my limit. For today on the daily chart the lowest price for DOGE on the graph, is 0.565 cents at 12:15 pm or so which occurred during the dip I was targeting. See the chart below, the lowest price given is $0.565358 on the daily chart. So how then did my order fill at $0.5236789? 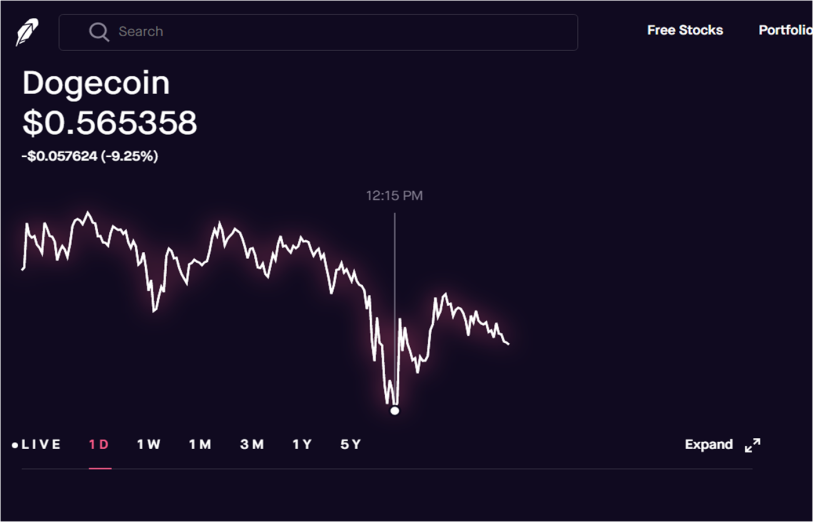 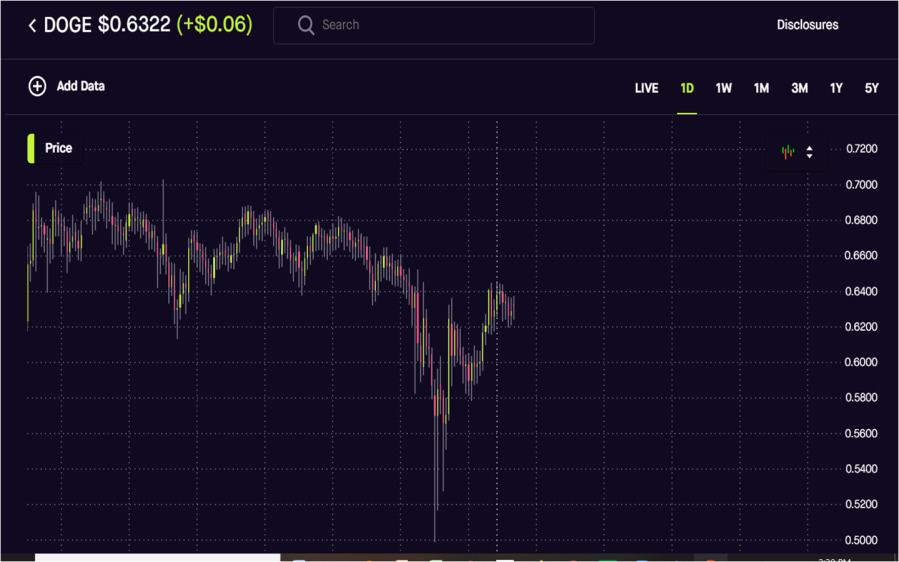 From the figure above: My order at $0.5236789 was filled almost at the very lowest point on the graph in one of those transparent extensions of the candles. Someone even got filled right at about $0.50, maybe even at $0.4999 cents. Probably in a panic during the drop, some buyers likely limit sold or had stop-limit sells set in these lower levels. The orders that were filled below around $0.54 cents probably happened instantaneously. The dip below $0.60 cents lasted in total for maybe about 20 minutes but the display if you were watching in real time only would have dipped to ~ $0.56 or so.

I used a couple dollars left over from another trade, and already I wish I had made the buy higher. The confirmation as seen below was sent just after noon or so.

This is how you execute a perfect limit buy. Set it in advance, and set it around some level of resistance that will only be touched instantaneously.

In particular, as some advice for you with respect to DOGE, I have noticed that after a crazy run-up, when it hits some round number of resistance, like DOGE did at $0.70 cents today, you can expect a good limit buy potential at maybe around 20% or lower than that level of resistance around new all-time highs. Since it had been up around $0.65 cents, I figured $0.50 cents and somewhere a little above that would work. DOGE especially seems to operate at round and predictable levels. For example, 0.50 cents is a significant level from economic and mental perspectives. It's easy to understand buying and selling pressure at such a level, especially with very volatile price changes and an expected price correction after a crazy run.

In my previous article (DOGE way up, get ready to dip and limit buy) I suggested that if you wanted to get in, you try this approach with a limit buy. In fact, it's always a great idea to have a little cash set aside to do these kinds of limit buys for your favorite cryptos, but you must recognize the patterns. Go back assess what happened after other run-ups

Especially as DOGE is hot right now this may be your best bet to getting a better position than you would have otherwise. And, such drops can occur almost instantaneously with DOGE after these kinds of run-ups so have the limit buy in place ahead of time.

Thank you for your support, good luck out there, and may all your days be green.