Is Chiliz (CHZ) A Good Investment? In-depth Analysis and Near to Longer-Term Expectations 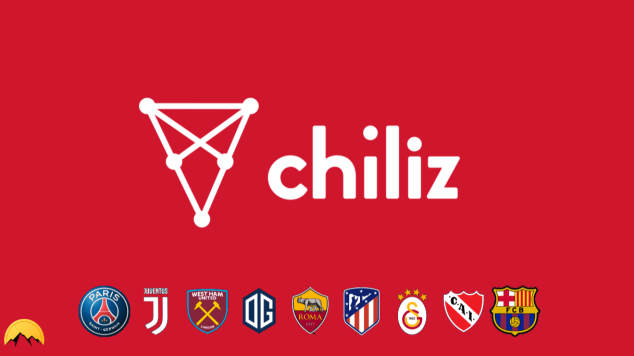 There are hundreds of cryptocurrency projects with the same use cases and similar workflows. After the rise of Ethereum and other altcoins, many newer projects tried to mimic similar strategies and brand themselves as “the better and faster Ethereum with higher amount of TPS.”

Unfortunately, the majority of new crypto startups have failed to achieve such success and many crypto investors are tired of seeing the same broken promise over and over again.

But then there’s Chiliz. Unlike many other lower market cap coins, Chiliz is trying to tackle a different problem. Chiliz is a cryptocurrency that tries to help the tokenization of entertainment platforms and the sports industry.

The idea sounds great on paper, but how about the implementation? More importantly, is it worth investing in CHZ token? Let’s find out together.

In short, Chiliz is a crypto token that’s specialized in sports and entertainment platforms. The idea is to be able to become the bridge between the world’s biggest sports clubs and the fans. CHZ token fuels tokenized voting platform, team surveys, and acts as the “membership card” to exclusive rewards. And thanks to the utilization of blockchain technology, the fans can finally interact directly with the sports clubs. 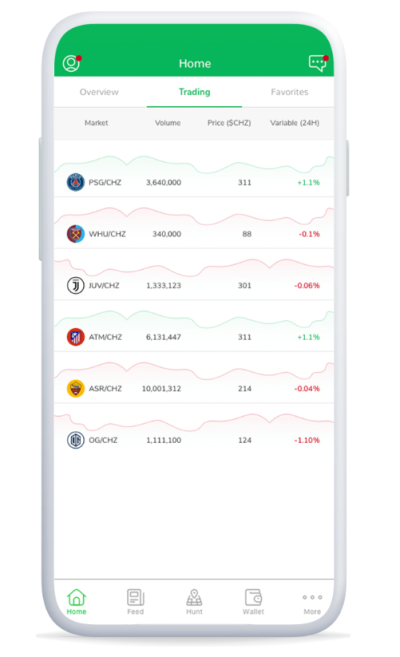 For crypto enthusiasts who also love football, Socios is like the perfect marriage of the two worlds. And considering Socios and Chiliz have the same core team, it’s normal to see Socios utilizing the power of Chiliz. And obviously, CHZ token is the center of the whole ecosystem. You might as well say CHZ is the native crypto token of Socios.com.

And just like every other digital currencies, Chiliz team believes the demand for CHZ team would increase where there’s more demand than supply. The vision here is to bring all the football clubs, esport teams, and other famous sport clubs to Socios.com platform. And hopefully, there will be more fans who demand voting rights as Socios.com gets more popular.

When it comes to crypto investment, one of the most important things is to see who’s behind the project. Why? Because when you invest in one crypto token, you believe in its future. And who can help you to realize such a future if not the core team of the same project?

So, how about the core team of Chiliz? Let’s start with the Chief Executive Officer himself. The CEO of Chiliz, as well as Socios.com, is Alexandre Dreyfus, who has been actively involved with various projects prior to creating Socios itself. Previously, he was the CEO and Owner of Chiligaming, an online poker company. He was also the CEO and Co-Founder of WINAMAX, a French online poker room and sports betting website.

Next, we have Max Rabinovitch, who acts as the Chief Strategy Officer at Socios.com and Chiliz. Previously he was the Creative Director at Chiliz before he was promoted to Chief Strategy Officer position. Max also does some freelancing work as a Freelance Creative Strategist. Earlier, Max used to be the Creative Director at ComboApp. He was also the Head Copywriter at INTERSOG, a professional learning application.

There’s also Thibaut Pelletier, the Chief Technology Officer of Chiliz. He’s been with the team since January 2018. Prior to joining Chiliz, Thibaut was the CTO of Spread Research for about six months. Spread Research was one of the companies that tried to provide Independent European Credit Rating Agency and Credit Research Provider.

Next, we also have Magnus Linder, who serves as the Head of Partnerships & Business Development at Socios. Previously, Magnus was the Head of Sales & Marketing at Swedish Football League. He was also the Head of Account Management at Fieldwork Stockholm.

After Magnus, we have Emma Diskin, who basically acts as the Chief Operating Officer at Chiliz. Previously, Emma was the Chief Marketing & Communications Officer at the same company, but she got promoted to the COO position. Prior to joining Chiliz, Emma was the Global Director PR and Social Media for Betsson Group. She also did various social media and PR consultancy to multiple companies as a freelancer.

There are other individuals in the team but I believe the above names already represent how good the core team of Chiliz is. Personally, I think most people from the Chiliz core team come from non-traditional backgrounds (such as the online poker industry or football industry).

They look different from other altcoin projects where typically the core team members come from other crypto companies or from corporate financial backgrounds. It’s nice to see a refreshing team with different visions.

This is where things get interesting. Chiliz is actually doing quite well in terms of partnerships. First of all, let’s not forget that Socios.com has plenty of huge football clubs on their platform.

One of the biggest football clubs partnering with Socios and Chiliz is Juventus, the Italian champion with Cristiano Ronaldo as their main star. The fact that Juventus granted Socios the right to manage its official fan token is a huge testament to Socios and Chiliz.

There’s also partnership with FC Barcelona, one of the most popular football clubs in the world. Just like Juventus, FC Barcelona also granted the rights to Socios to manage its fan token.

The partnership with Barcelona was a huge win for Chiliz

Besides these two giants, Socios also made a partnership with other huge clubs like Paris Saint-German, AS Roma, Atletico de Madrid, West Ham, and Galatasaray.

In another type of partnership, Socios and Chiliz have also partnered with Enjin, the famous gaming-focused crypto token. The partnership allowed the creation of branded digital collectibles for the sports and entertainment industry. Chiliz would commit to using the Enjin blockchain platform in minting Ethereum-based collectibles in the form of ERC-1155 standard.

Next, there’s also a special partnership with Binance Chain, where the integration would help Chiliz to incorporate Binance Chain into their application layer as well as to offer instant payments service, pre-paid gift cards, and even micro transactions for various kinds of online services.

Chiliz has also partnered with Binance

After Binance Chain, Socios and Chiliz also have a partnership with Chainlink, where it would allow Chiliz to create NFTs that could react to the real world and mint exclusive collectibles to commemorate real events.

As you can see from all the names above, Chiliz and Socios have made huge efforts in the partnership sector. Compared to many other altcoins, Chiliz have been doing much better. To become partner of Juventus, Barcelona, or Paris Saint-German require huge efforts and Chiliz have successfully done that.

Talking about potential roadblocks for Chiliz future, there are some issues that need to be addressed.

First of all, the ongoing coronavirus pandemic. Yes, believe it or not, this pandemic might become one of the biggest challenges for Chiliz. Let me explain. As you know, the current pandemic has forced many sports events to cancel and delay their competitions until undefined time.

Not only that, but the ongoing lockdowns in many first world countries would also erode the fans’ pocket for quite some time. At the moment, many families from the middle class cannot even afford their rent or food, and obviously, they won’t think of buying football fan tokens until they can become financially stable again.

Another potential roadblock to Chiliz future is the ignorance of football fans of crypto technology. While some people have openly embraced blockchain technology, there are still hundreds of millions of football fans out there who refuse to learn how cryptocurrency works.

In fact, many people out there still consider crypto as a scam and “funny internet money”. It is always hard to bring them to the crypto space when they are already skeptical by default.

Just like most of the other altcoins, CHZ is also highly dependent on the Bitcoin price action trend. Yes, even though CHZ price action on the open market is not tightly following BTC, there are still some big connections between the two.

The comparison between CHZ and BTC price action - 4H timeframe

So if you decide to invest in CHZ, make sure to pay attention to BTC price action as it will affect CHZ’ future price.

In terms of social stats, Chiliz has been doing well. As usual, Telegram is our main indicator to see how active a community of one specific altcoin is. When it comes to activity, Chiliz Telegram group has plenty of them, even though they don’t have more than 8,000 members. 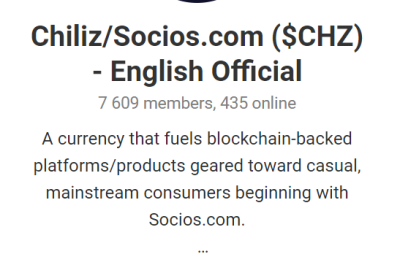 Chiliz is a unique project that tries to bring the blockchain world to the traditional sport and entertainment industry. It’s been doing well, and it has huge partners in its pocket. Personally, I like this project, and they are not trying to be an “all-in-one” blockchain platform with high TPS promise, and that’s refreshing.

The team is solid, they come from different backgrounds, and that’s quite important. And don’t forget Chiliz partners are all big names. Juventus, FC Barcelona, Atletico Madrid, and PSG are huge football clubs with worldwide reputation. Binance Chain and Chainlink are also big names in the crypto space. From the partnership section alone, you can see that Chiliz has been doing exceptionally well.

As for the potential risk in Chiliz future, the ongoing coronavirus pandemic will hit the sport and entertainment industry for (at least) a few months from now. And as mentioned above, this pandemic would hit Chiliz business and potential growth as well. If things can go back to normal like before the pandemic, Chiliz would definitely go higher. The problem is, nobody really knows when things will go back to fully normal again post-coronavirus.

In my opinion, CHZ is a worthy investment, and has a promising future. But don’t forget the challenges that it faces, including the current pandemic situation. What do you guys think about Chiliz? Let me know in the comment section below.

Is Enigma A Good Investment?

Is Suterusu A Good Investment?

Is FTX Token A Good Investment?