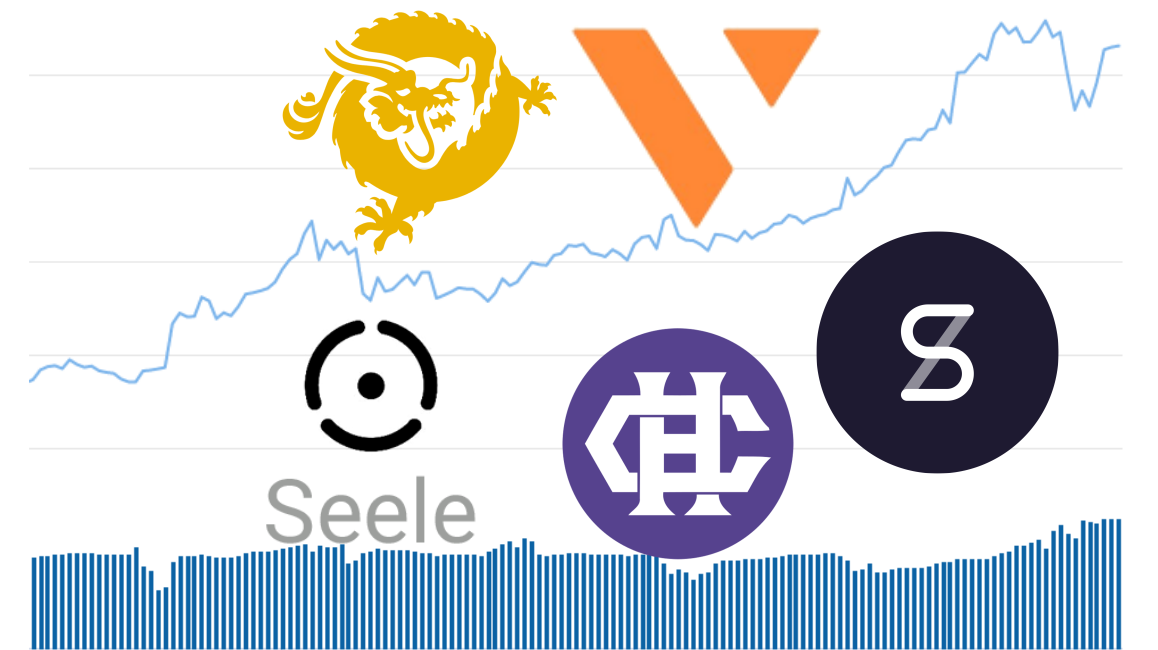 In this post we will take a look at the best performing cryptocurrencies of each week, for the last 15 weeks, among the coins that are currently at the top 100 market cap (according to coingecko.com). First, just for reference, let's look at the total crypto market cap chart: 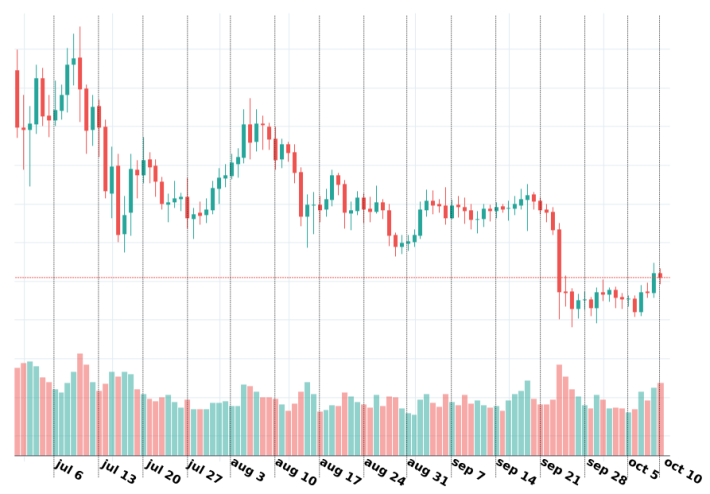 The best performer of this week so far is REN (REN), with a 51.7% increase. No, it wasn't Chainlink, which is only in 5th place with 26.5%. For the previous weeks we have (showing week ending on the following dates):

(Obs: the week ending in Aug 24 had 9 altcoins that performed better than FCT, but they are not anymore among the top 100 market caps.)

The real winners here appear to be SEELE, SNX, HC, VSYS and BSV, which were the best performers in weeks where the market strongly moved downwards -- and they are still in the top 100 market cap. Let us take a look at each of those coins.

This is currently the 86th largest market cap, with maximum supply of 1 billion tokens, each one traded at $0.066417 currently, by 6 different exchanges. It has lost 78% percent of its all-time high of $0.30. But what is Seele? I am not yet convinced if this is a legit effort or some type of scam. Some reddit users reported it as a scam and their about page is empty. The github repositories seem not that active (but not totally dead). I have to say that by taking a quick look at their white paper it didn't seen to me to be a scam, and much of what was there made sense to me, despite the abundance of complicated technical terms. However, the amount of things that this project wants to accomplish seems too ambitious. According to their website, the mainnet was launched in the end of March earlier this year. It is hard to guess why the surge in value this September, since there are barely any news on Seele, and even the roadmap in their website does not show any significant event recently. I cannot make a final judgement, but I wouldn't bet on this project. If someone has any relevant information about Seele, let us know in the comments. 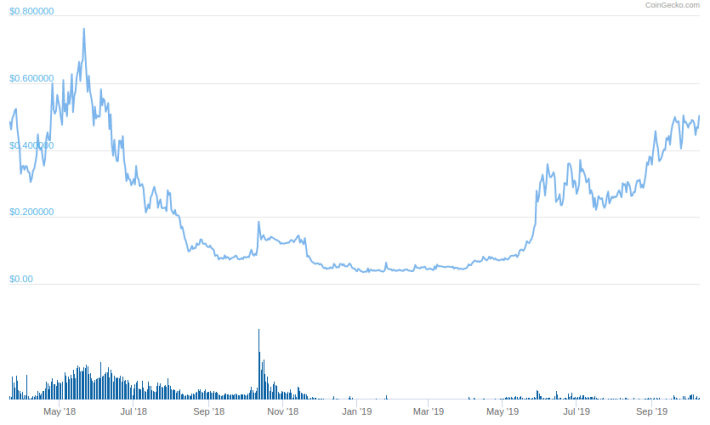 Synthetix is a rebranding of Havven, which was one of the first crypto backed stablecoins. They work over the Ethereum network, and offer two types of tokens: the SNX token, and the so-called "synthetic assets" or "Synths", which represent gold, dollars, bitcoin, Tesla or Apple shares, and so on. Basically, users that possess SNX can use these tokens as collateral to "mint" Synths. All the trade of Synths on the Synthetix Exchange generate fees which are paid to SNX holders. Synthetix was founded in 2017 by Kain Warwick, co-founder and CEO of Blueshyft, a very large payment network that processed tens of millions of dollars in crypto transaction volume. It seems an interesting and solid project, worth looking at -- specially after the fact that it grew 30% in a week when the market was going south. Now, why did it go up so much in that week specifically? We don't need to find out why: it has been going up consistently for months!

Hypercash has the 63rd largest market cap, with 84 million tokens valued at $1.59 each. It is widely traded. The peak in price that we see in August 19th is just a small recovery, for a coin that lost 96% of its value since its all-time high of $37.13. 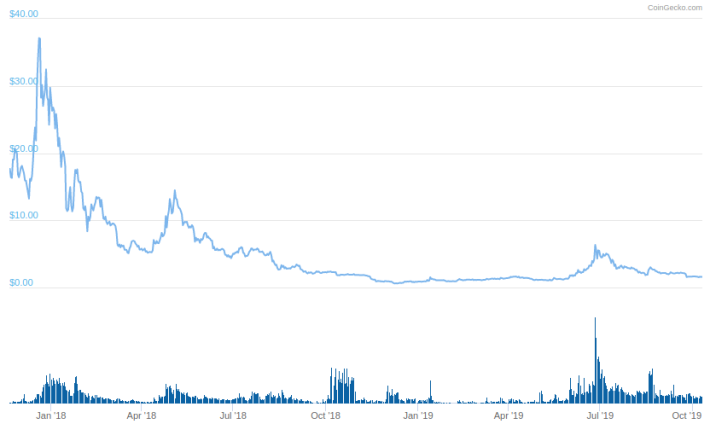 The Hcash blockchain allows a combination of Proof-of-Stake and Proof-of-Work mining (like Decred). Similarly to many new altcoin projects, it looks overly ambitious, trying to solve all the problems of existing blockchains. It has features of many other blockchain projects: privacy focus (much like Monero), post-quantum safety, ASIC resistant (Monero again), interoperability with other blockchains (like NEO), etc. Actually, the chief cientist behind Hypercash is Joseph Liu, whose work on ring signatures enabled the development of Monero. The HCASH network is actually composed of two parallel blockchains: the main chain HyperCash, where the HC token lives, and, derived from it, the HyperExchange (HX) chain, whose purpose is to bridge the communication between blockchains such as BTC and ETH and other non-blockchain networks such as DAGs. The team is based in China and Australia, and, for such a large market cap, it is quite silent on the news. Their github is somewhat active. It remains to be seen if it will fulfill all its goals, or if HC will be forgotten among the other altcoins.

This is the 41st largest market cap coin, with an essentially unlimited total supply, but current supply stands at 1,824,316,573 tokens priced at $0.078711 each. Its price chart is quite different from usual: 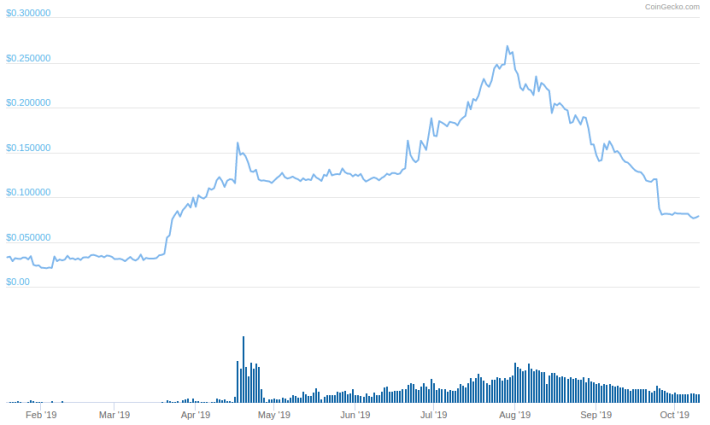 One of the names behind VSYS is Sunny King, none less than the creator of the proof-of-stake that many cryptocurrencies -- such as EOS -- use nowadays. The white paper does not lack in the typical high aspirations of blockchain projects:

There are tens of thousands of blockchain project happening around the world. But due to the many flaws and inherent scalability issues, the world has yet to witness a massive adoption of this technology. It is time to tackle the core issues of blockchain and reinvent the technology to bring a truly scalable, stable, and global blockchain platform that is easy to use and is compatible with billions of system. By doing so, enable the widespread of blockchain adoption and push forward a whole new era.

The main problems that V Systems wants to solve is to improve the use of blockchains as databases, by overcoming problems such as scalability, inefficient consensus models and energy use, and lack of interoperability (similar to the Hypercash above). As stated in their white paper:

VSYS claims to improve on the original proof-of-stake model, via its supernode proof-of-stake (SPoS), which reminds me of EOS' delegated proof of stake. Holders of VSYS coins can lease them to elected supernodes, who are responsible to mint new blocks. The VSYS coin holders are then rewarded with an interest. The project seems very ambitious and carry lots of interesting ideas, but again, only time and real-world adoption will tell if they will succeed.

Bitcoin SV, short for Bitcoin Satoshi's Vision, is a more or less well-known coin, forked in November of 2018 from Bitcoin Cash (which in turn was forked from Bitcoin in 2017), and now has the 9th largest market cap. Bitcoin Cash (BCH) intended to fix Bitcoin's problem of high fees and low transaction throughput. You can read more here about the split between BSV and BCH. 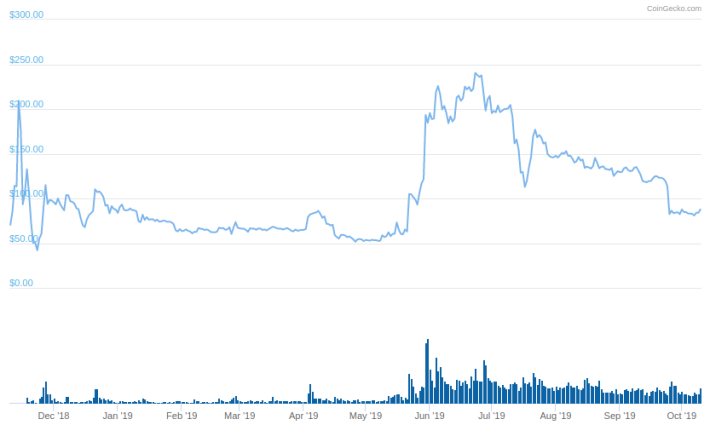 That's it for now. Sometime in the future I will take a look at the other cryptos mentioned above.