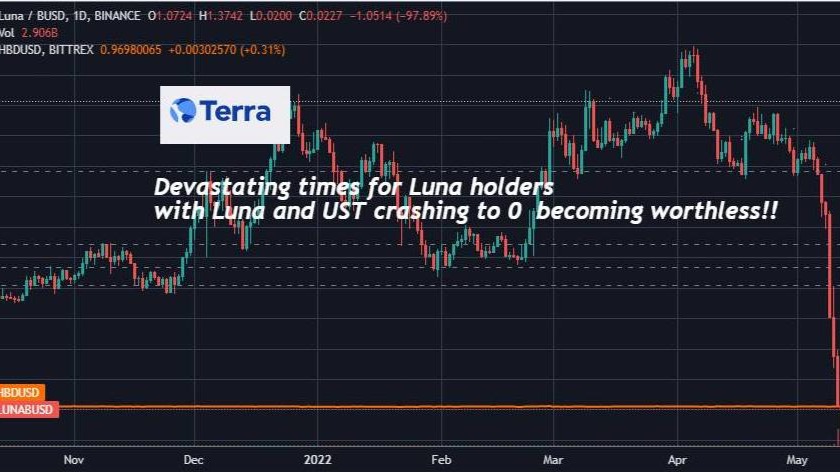 Devastating times for Luna holders with Luna and UST crashing to 0 becoming worthless!!

Just last month, I wrote an article saying that UST may succeed in its Terra_money’s founders plans to kill Dai, but how stupidly wrong I was.

Yes, I am a Luna holder and put a lot of UST in Anchor Protocol and the day before yesterday I could sense something was terribly wrong because Luna’s price fell to 29$ from like 80$ dollars it was just a few days back and yesterday Luna fell to 5$. Before this, UST’s peg tore apart so badly, yesterday when I checked it was 0.4 cents. It hit me, my Luna and UST positions are close to getting worthless.

Digesting the reality that I made a costly investment mistake…

(Damn this hurts my self esteem to tell you the truth)

Well sad it is… but twitter was filled full of funny jokes critizing that boastful Terra founder, Do Kwon, it was entertaining, even if as a Luna holder, I am supposed to be devastated.

I realised I must acknowledge my mistake of ever believing in Luna and UST and spread the word because to tell you the truth, I always felt I know a lot about crypto and I have been bullish and even recommended Luna as a good investment on my blogs. So, it’s painful to realise that I have ever make such a rotten investment decision.

That’s why they say, and I emphasize that whatever I write in my blog, is not investment advise, it’s just my understanding of crypto and by all means I am no expert , so everyone should be responsible for their own investment decisions and the consequences of it.

Anyway… lets go to the jokes, because I am bally itching to criticise this Do Kwon charactor. He is great in PR who creates news doing some outrageous things and making boastful statements, which makes good entertainment for sure but well in the end that UST stablecoin and Luna is 0 almost…almost…almost This was not very long ago where Do Kwon announced his strategy to kill Dai. I have even written about it and yesterday I read that while Terra was heading to 0 while MakerDao incharge of managing Dai stablecoin was up by 11%.

Do Kwon is not @stablekwon anymore he is @unstablekwon This is an apt one for Do Kwon who is supposed to be a master of stablecoins and his twitter handle is @stablekwon. Well, it obviously cannot be that anymore, it should be @unstablekwon who magially and tragically for Luna holders converts Luna to Lunarekt. There was another joke that Do Kwon was the master of crash coin not stable coin.

Crypto community started the countdown monitoring Luna and UST touch down to 0!!

And ofcourse, everyone was keeping a countdown of when Luna would go to zero… ha, ha!, ouch, some pain in my heart can’t help it being a luna Holder, no tears in eyes but pain…ok!!

And ofcourse, it was all so obvious yesterday that Luna was going to 0!!

And there were several other jokes, this Do Kwon had a bet with some one in twitter, which if you come to think about it may have been a prophecy because its come true. That person said Luna will come to be below 10$ in 2022 but no one will be wanting to buy it… I don’t know where that tweet is now, but I saw it yesterday.

My defence on why I stayed invested in Luna.

Well, I wanted a stablecoin that’s not collateralized by the dollar and not centralised and UST was top on that. There were over collateralized stablecoins sure but having one through minting was stressful because have to do a lot of balancing work to keep the crypto collateral overcollateralized during periods of abrupt price changes.

Also Hive’s HBD also is an algorithmic stablecoin, so I thought UST was a nice algorithmic, popular and safe to hold decentralised stablecoin.

Next, news all over that Luna Blockchain is popular because of Anchor Protocol that pays 19% interest on UST etc. Luna’s Anchor Protoccol, Mirror Protocol have been really popular and been talked about as a good way to save and earn passive income. These kind of things hang on to one’s subconscious mind, so I started my journey in Luna few months ago with Anchor Protocol.

Then media news of course, I read that Binance Smart chain and Solana, that were once hot blockchains were losing TVL today as investors have gone to Blockchains like Luna and Fantom,

Then of late, this over confident Do Kwog has been making news. He’s been buying loads of Bitcoin, infact was the 3rd highest purchaser of Bitcoin so that it can serve as reserve currency for backing UST in times of turmoil.

He kept buying BTC since Jan and his aim was to build a 10 billion dollar worth of BTC reserves. This news had caused the rise of Luna’s price as well because it increased investors’ confidence on UST.

Very recently, Luna’s price was on AtH’s even when other crypto prices were falling hard.

Also recently, Tron’s Justin Sun, inspired by success of UST planned to launch the same kind of algorithmic stablecoin too which he launched very recently saying that it will give 30% interest and give financial freedom to people holding that stablecoin that’s built on Tron.

Also the screaming news that UST is the third largest stablecoin after USDT and USDC and the No 1 decentralised stablecoin in the crypto space!!

So these were the logic behind me staying bullish on Luna and UST, and it sounds like good reasons because lots of crypto investors also believed in Luna and USt for similar reasons.

After all, UST was used also for making payments through the Chai app, this was pretty impressive to me.

Now, let me try to explain what’s happened to this UST.

As far as I know 3 days ago itself problems stated for terraUSD with UST struggling to hold the peg and peg went to 95 cents. Even that time, Kwog Do in his style made some statements that everyone are freaking about like girls (sexist comment) and there was no need to freak over UST maintaining it’s peg, you can check his tweets.

So when the crash happened, Luna’s price also fell which is problematic and it lead to Luna’s death spiral.. I am sure lots of selling of Luna took place while UST got exchanged for USDC and other stable coins in Curve and got dumped.

So, during a price crash situation algorithmic stablecoins have a real risk of entering a death spiral because the price of Luna falls with huge sell offs of the asset .

So when UST’s peg falls, its supply is decreased to increase its peg value, for which UST is burned for 1 Dollar worth of Luna, I am guessing no one wanted to buy Luna with its falling price as it won’t be profitable and so that balancing peg mechanism did not work out.

Luna Foundation Gaurd which was established to oversee that UST maintains its peg, failed to do whatever balancing was required to maintain UST’s peg.

Later, to bring the peg of UST back, I don’t know if Luna had used its BTC reserves, where it can burn UST for 1 dollar worth of BTC, if it did, it failed to maintain UST peg. Maybe, Luna was indirectly responsible for the fall of BTC’s price.

Luna did enter a death spiral this time, and could not be used at this time to bring the UST’s price peg up.

Anyway, I am truly feeling very foolish for being Lunatic(Luna community tribe), even though this Kwog Do fellow is clearly an idiot with too much pride. Although I lost a lot and I am not someone with loads of money, I feel really bad for other Luna and UST investors.

However, in today’s world people lose their savings because they put money in banks which later disclose that they have become bankrupt with big Corporates having defaulted on loans, leading to NPAs. So, depositors have lost out on their principal deposits they have deposited in banks. Fiat currencies have devalued in some countries, so all the money that people had turned to be worthless.

I have lost money not due to some DEFI hack, although that could have also been possible, but because Terra failed at its mechanism to maintain peg of UST. As you can see on May 9th HBD’s price fell below 90 cents and came up to 1$ on May 10th but its struggling to main 1$ peg and its constantly falling to 86 cents these past 2 days.

It’s possible that this Do Kwog becomes more humble after this incident, good for him if he does. He still is tweeting everything will be restored etc, etc… I am not having hopes on this, the fact his envisioned UST stablecoin failed its test in maintaining the 1$ peg means Luna has definitely lost its credibility.

The loud crash of the Crypto Market jerked up my sleeping crypto cat Mochu!!