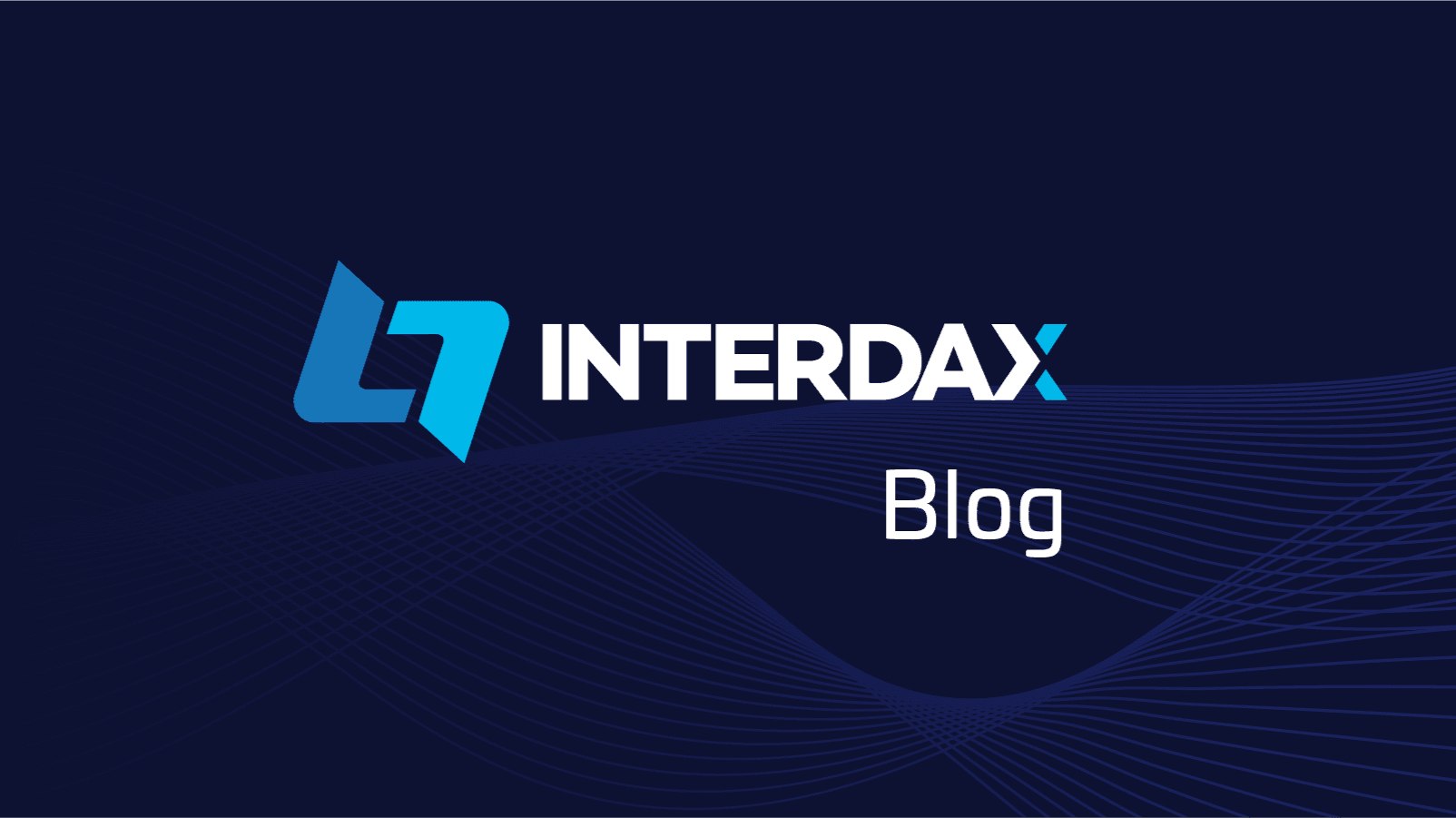 A look back at Interdax’s key achievements and milestones in 2020. 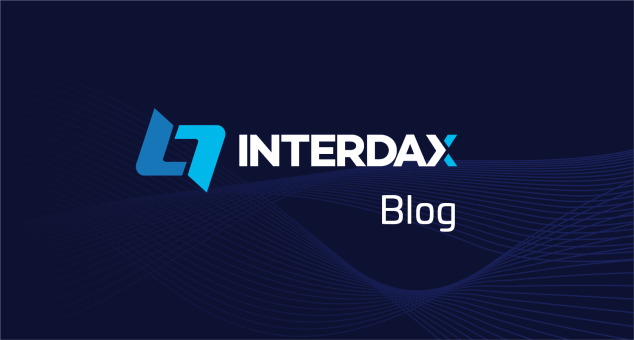 The past year has provided countless opportunities for cryptocurrency traders. In the first half of 2020, bitcoin opened around $7,000 but then crashed below $4,000 on ‘Black Thursday’ before eventually recovering these losses by the end of May. Our platform withstood the Black Swan event, and we did not experience any downtime or degradation in performance.

A bull run in Decentralised Finance (DeFi) projects characterised the summer. Bitcoin’s upward trajectory also gained momentum as the block subsidy halving event cut the issuance rate in half. The leading cryptocurrency gained more acceptance and became more legitimised, with more players in the world of traditional finance slowly but surely warming to it.

Paul Tudor Jones catalysed a ‘digital gold rush’ amongst institutional investors after he announced he was investing in bitcoin in May, and set the stage for further adoption by institutional players in the second half of 2020 — with more big names such as Stanley Druckenmiller, Ray Dalio and even JPMorgan praising the peer-to-peer digital currency.

Riding this wave of fresh demand, BTC-USD closed above $10,000 in July 2020 for the first time in 12 months, and eventually breached the all-time high in December, ending the year just under $29,000. The price of bitcoin enjoyed a gain of +304%, Ethereum’s ether increased by +473%, and the total cryptocurrency market cap approached $800 billion as the year came to a close.

It was also an eventful year in traditional markets: gold traded above the previous all-time high of $1,921.13, oil futures briefly traded in negative territory, tech and biotech companies outperformed the broader equity market (such as Tesla’s share price which soared 743% in 2020), and central bank balance sheets ballooned to unprecedented heights. 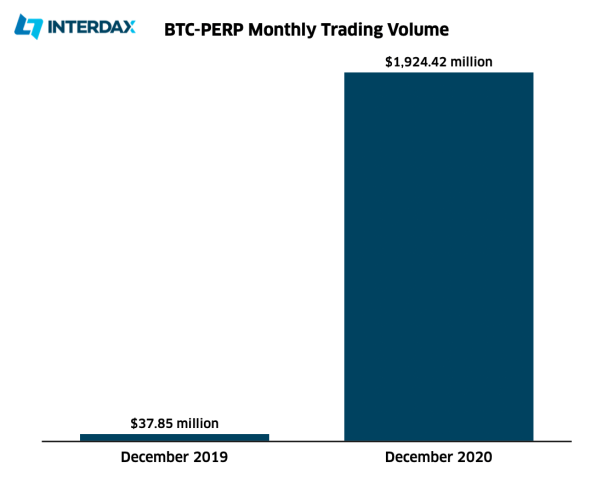 In this article, we’ll review the biggest developments in 2020 for Interdax.

To kick off the new decade, we hosted the DaxDecade trading battle and awarded 2 BTC to the top 10 traders.

Two trading battles were also held jointly with influencers, where 0.375 BTC was awarded to the winners.

During May, the public API was released, which allows our customers to trade programmatically instead of manually.

Improvements to the deposits and withdrawals were implemented in Q2.

As soon as a transaction is broadcast, the deposit is visible in the interface - but any deposited funds are only available for trading after the required number of confirmations (2 for BTC deposits or 12 for ETH/USDT deposits).

The margin bonus program was introduced in August. New customers can claim a 5% margin bonus on their first deposit.

Interdax partnered with QGP Markets in August. The market making firm has been building liquidity in the cryptocurrency market for over six years and helped us to provide deeper order books for our customers.

Our fee structure was improved in September.

We hosted our second featured trading battle for 2020, DaxSummer, which took place in September and lasted 24 days. A total of 5.5 BTC was awarded to 25 winning traders.

September also saw the launch of our second coin perpetual: ETH-PERP, a cryptocurrency derivative settled and margined in ether (ETH). 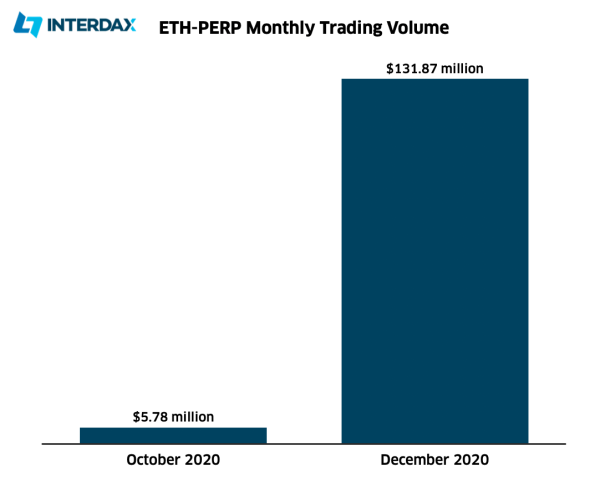 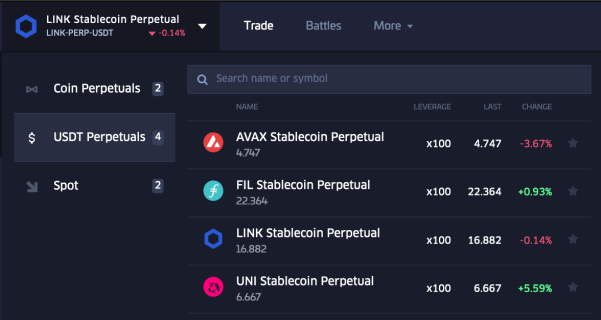 In the fourth quarter of 2020, the Interdax platform exited beta stage and we introduced spot trading for BTC-USDT and ETH-USDT.

In the last two months of the year, the trading volume for our BTC and ETH spot pairs grew +54% and +31% respectively: 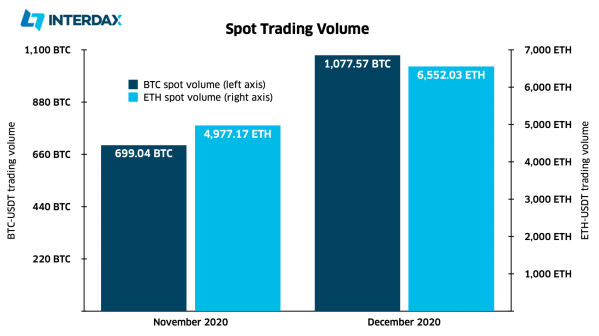 Along with spot trading, a stablecoin perpetual for Filecoin (FIL) was also released in Q4.

Another major development in Q4 was an improvement to the interface to clearly display the available balance, maintenance margin and initial margin, highlighting the riskiness of your position(s).

You can read more about the margin widget here.

We’d like to thank you for being a part of the Interdax community. The year ahead promises to be a spectacular year for cryptocurrency. We hope you have a healthy and profitable 2021!

Interdax — Level up your trading with the next-gen digital asset derivatives exchange. 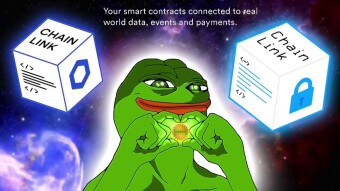