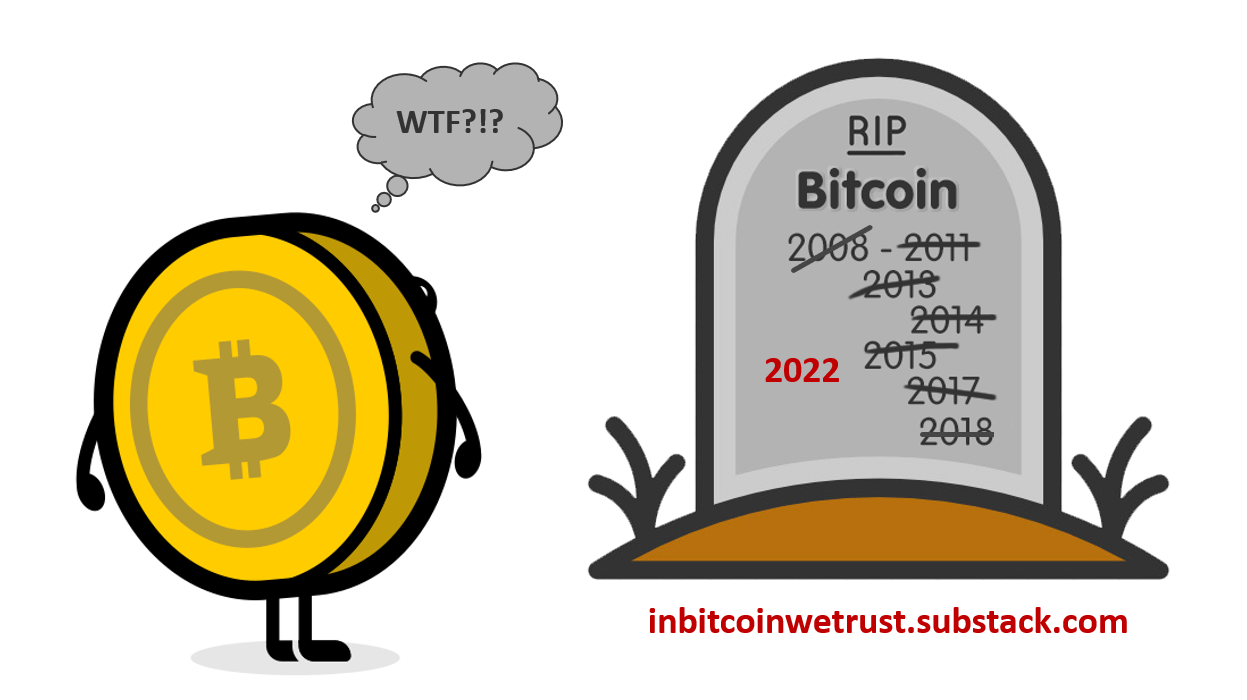 The Fall of the LUNA Sh*tcoin Is Dragging the Market Into the Abyss, but Bitcoin Will Emerge Stronger. As Always ...

Extreme fear continues to prevail in the Bitcoin and cryptocurrency market. I have rarely seen hours as violent as the ones we just experienced. The reason for the panic that has gripped the market? It's not the war in Ukraine and Vladimir Putin's repeated threats to use nuclear weapons. Nor is it inflation in America, which remains very high at 8.3% in April 2022.

The real trigger for this general panic in the cryptocurrency world is the collapse of the Sh*tcoin LUNA and its “stablecoin”, the UST. The reason I put stablecoin in quotes here is that you can't call UST a stablecoin when its price is currently $0.39 as I write this:

The fall of UST is the fall of Terra founder Do Kwon's strategy. Do Kwon is still talking about a rescue plan to save the Terra ecosystem, but no one wants to believe it anymore. He would have obtained a loan of 1.5 billion dollars to try to repeg UST, but the latter is under attack, and the situation is not likely to get any better.

At the same time, the value of LUNA has also experienced a rather incredible fall:

A 99.97% drop in the value of LUNA since the ATH reached on April 5, 2022, to $119. Those who had invested their hard-earned money in this Sh*tcoin must be biting their fingers today. The big question now is what will be the next Sh*tcoin to suffer the same fate, as there will probably be more. The cryptocurrency industry is under attack, and the weakest projects will pay a heavy price in my opinion.

This general fear has also weighed on the price of Bitcoin, which just hit a low of $25.3K. I had already told you recently that Bitcoin could very well fall below $30K, when its price was still $39K, but that I would continue to HODL no matter what. I haven't changed my opinion.

You may wonder why the fall of LUNA is also dragging Bitcoin into the red below $30K. Besides the fact that the general panic is causing many investors to sell without really thinking, there is the fact that Do Kwon had started a $10 billion investment plan in recent weeks to buy BTC and thus strengthen his ecosystem.

The fall of LUNA, which seems to have been cleverly orchestrated by some players, forced it to sell all its BTC to cover losses, which caused immense selling pressure as BTC reserves on the spot market were at a 4-year low.

The price of Bitcoin has logically fallen, but for me, this is more of an opportunity than anything else, because the fundamentals have still not changed as I reminded you just yesterday when I talked about the fear of investors letting their emotions get the better of their sense of logical reasoning.

To come back to Terra, it seems that the last news is that the economic attack of which the project was the victim was orchestrated by BlackRock and Citadel. I'm still speaking in the conditional tense because nothing is certain, but I'll tell you what is being said.

BlackRock and Citadel are said to have borrowed 100K from Gemini. This appears on their loan book. These institutions then swapped 25K of BTC into UST. This was quietly in advance of the attack on Terra. When it was time to operate, they contacted Do Kwon and told him they wanted to sell a large amount of BTC for UST.

Since this was a large trade, they told him they did not want to move the market too violently, so they asked him if he would prefer to buy their large amount of BTC at a discount for UST.

Do Kwon took this gamble. So he gave them a lot of UST, which significantly reduced the liquidity of UST at the same time. BlackRock and Citadel then dumped all their BTC and UST which caused a massive slippage and triggered a cascade of forced sales of both assets.

The real problem was that BlackRock and Citadel knew that Anchor, which holds a lot of LUNA, was a Ponzi scheme and that this crash would trigger more withdrawals than Anchor would be able to pay back. These forced withdrawals and sales triggered a massive sell-off of LUNA. UST's $1 peg is no longer tenable. To try to save UST, Do Kwon is forced to sell the BTC accumulated with the Luna Foundation to support UST and then burn UST. This adds pressure to the sale on the Bitcoin market.

This market manipulation becomes even more Machiavellian when we realize that now BlackRock and Citadel can buy Bitcoin again at a lower price to pay for the loan and put the difference in their pockets.

The general panic that has taken hold of the market is causing Bitcoin to plunge toward $25K, but Bitcoin will come out of it stronger

In the meantime, billions of dollars of capitalization have vanished and the panic is pushing Bitcoin towards $20K. Not sure Bitcoin will fall that low, though. There is an interesting reaction on the $25K level with a rebound to $28K at the time of writing.

But that would be no guarantee that the situation will turn out for the better. As the market currently stands, we could still see worse. That's why you need to be more cautious than ever and focus on the real signal which is the Bitcoin revolution. Bitcoin will rise stronger from this episode as it has every time in the past:

This is not the case for many Sh*tcoins whose value will continue to plunge ineluctably towards zero. A great lesson to learn for all those who continue to let their greed take over by buying more than dubious projects to make more and more profits.

I am not judging anyone here. I am simply making a statement. On my side, I have accumulated more BTC at $31K as I explained to you 48 hours ago. The price drop to $25K has not changed my attitude, and I am keeping a long-term view that will allow me to benefit greatly in the future.

I hope none of you got caught up in the fall of the LUNA Sh*tcoin. To conclude, I only have one piece of advice for now: be mentally strong and stay patient.