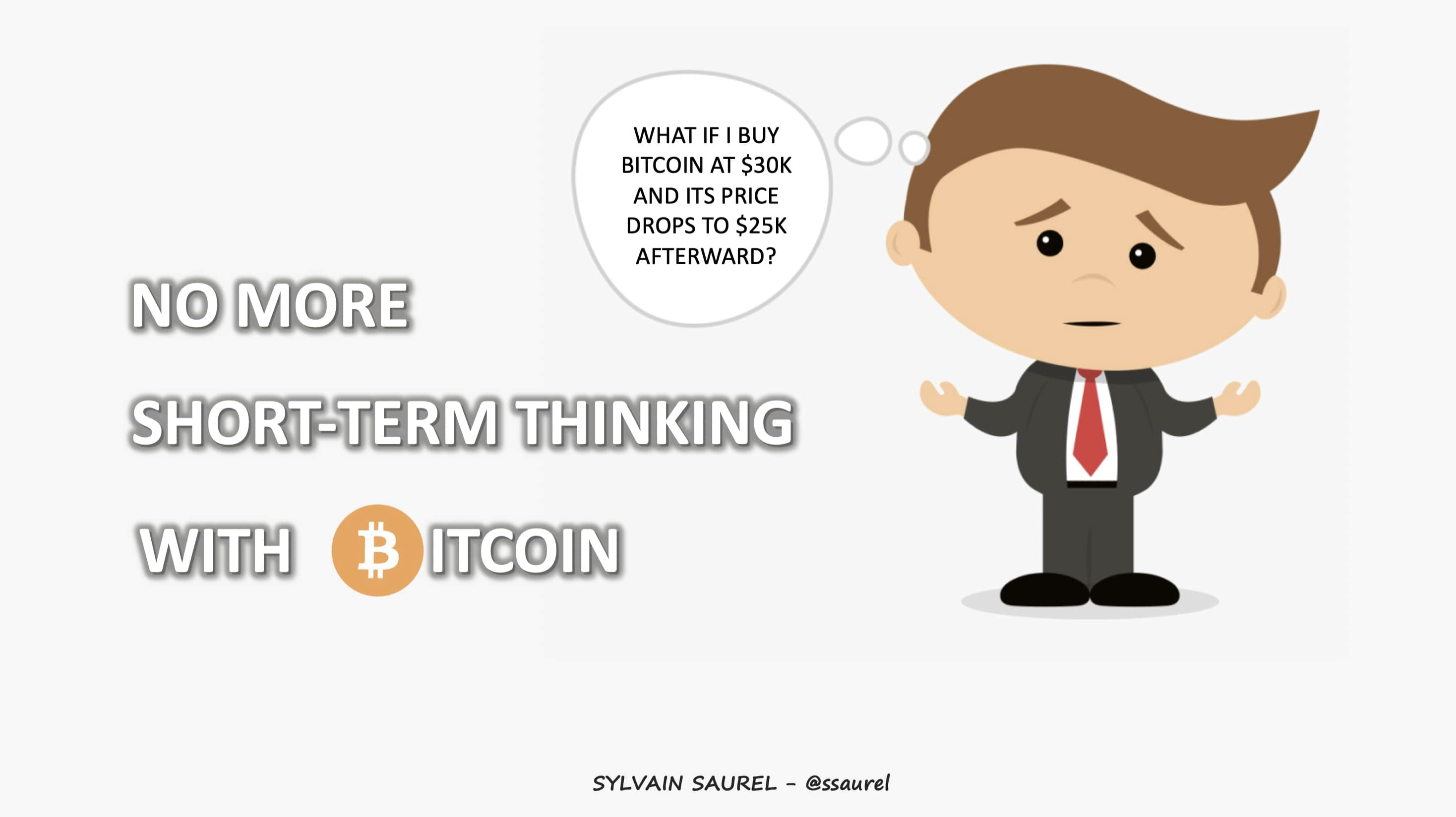 Short-Term Thinking Is Killing Your Bitcoin Journey. Here’s How To Stop.

I've been a Bitcoiner for many years. One day, I decided to write about Bitcoin daily to help as many people as possible discover this monetary revolution that will forever change their lives for the better.

So I often have the opportunity to talk with people about Bitcoin.

I try to go beyond the simple high-yield investment to help them understand that Bitcoin is primarily a savings technology. Buying Bitcoin is not investing, it's saving.

Short-term thinking term prevents you to embrace the Bitcoin revolution

Bitcoin allows you to save the fruits of your labor safely. Once you have the private keys associated with your Bitcoin, no one can stop you from using it as you wish, or even steal it. So Bitcoin is all about power.

Despite my best efforts, some of the people I talk to still see Bitcoin only as a get-rich-quick scheme.

They start to consider a whole bunch of strategies to buy Bitcoin and make the most profit in the short term. Short-term thinking jeopardizes their Bitcoin venture.

In the illustration below, I had fun highlighting the different feelings these people have about Bitcoin:

As you can see, the people I am talking about in this article are people who are in reaction rather than action. These people are making the mistake of letting the price of Bitcoin dictate their behavior.

You suffer from Bitcoin price volatility

When you realize that the Bitcoin price volatility is a feature, not a bug, you realize how much these people are risking. They are taking the risk of allowing panic to drive them to sell all their Bitcoin at a loss at the slightest crash in its price like the one we experienced on May 19, 2021.

These people had vaguely heard of Bitcoin during 2016. Listening only to the media's version, they thought Bitcoin was nothing more than a fad of a few geeks.

The bursting of this bubble caused many to sell at a loss before eventually becoming convinced that Bitcoin was a bubble in itself.

The return to a Bull Market in the second quarter of 2019 began to change these people's minds. Nevertheless, their short-term thinker temperament still prevented them from acting. These people did not want to buy back Bitcoin, as they still had in mind the collapse of its price throughout 2018.

Throughout 2020, these people had the opportunity to buy Bitcoin under $10K, and even under $4K in March 2020, but they did not act. The big question that blocks these short-term thinkers is always the same:

By dint of self-blocking with these thoughts, these people saw the bullish rally start without them in October 2020. Throughout the rise of the Bitcoin price into uncharted territory, these people were repeating the same thing:

"I missed the boat. I'm waiting for a correction in the price of Bitcoin."

You keep waiting for a bigger correction

Waiting for a correction after a hot streak is a good idea, but the problem is that these people always want more. The price of Bitcoin had reached $40K before dropping to $29K in early 2021. That was the price correction they were waiting for to act, but again, they did nothing.

Still the same thought in their short-term thinker heads:

When the price of Bitcoin reached almost $65K in April 2021, these people were still waiting. They hadn't grasped the many corrections that came their way. Their goal is still to be able to buy Bitcoin at the same price as in 2020.

This thinking is a dramatic mistake because if Bitcoin were to fall to around $10K, these people would panic and not buy BTC. These short-term thinkers can be compared to procrastinators who always put off taking action until tomorrow.

To stop getting trapped by your thoughts, you need to step back and look at Bitcoin as a whole.

Look at how far Bitcoin has come since its inception, and even more so at what lies ahead for Bitcoin in the future. You'll realize that in 10 years, whether you bought your Bitcoin for $30K or $20K won't make as much of a difference as it did.

The most important thing is to stop short-term thinking and take action.

The safest way to take full advantage of the Bitcoin revolution while overcoming your short-term thinking problem is the strategy I proposed back in mid-2020. It is the simplest, but also the most effective. It consists of 4 steps:

By implementing this strategy, you will solve your problem and be able to take full advantage of the Bitcoin revolution for years to come. Most importantly, you will avoid letting your perpetual questioning alter your perception of the big picture.

The future belongs to Bitcoin and its success is inevitable. The latest example is billionaire investor Carl Icahn, a former staunch opponent of Bitcoin, who has just announced that he is considering buying it. If he makes this information public, you can even imagine that he has already done so.

It's up to you not to miss this unique opportunity and have eternal regrets in the future.