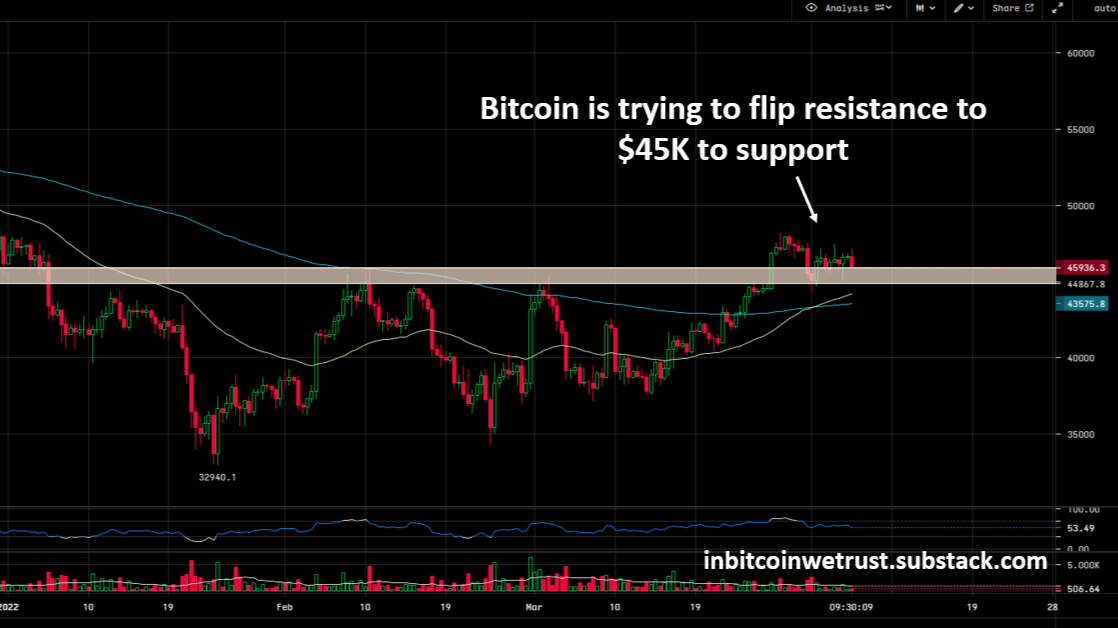 It had been a little over two months since Michael J. Saylor announced his last BTC purchase for MicroStrategy. Some were beginning to imagine that Michael J. Saylor had finally changed his mind about the incredible future that awaits Bitcoin...

I'm kidding, of course, but Michael J. Saylor has put an end to that expectation by announcing a new purchase of BTC for MicroStrategy in his customary tweet. In detail, this gives us purchase of 4,167 additional BTC for $190.5 million at a unit price of $45,714:

If you want to find all of the DCA BTC purchases made by Michael J. Saylor since he entered a full Bitcoin strategy in late summer 2020, I keep a detailed list here: “Bitcoin DCA like Michael J. Saylor”.

As the supply of Bitcoin on exchange platforms continues to dwindle, some are wondering what the Bitcoin price has been doing for the past few days. After quickly surpassing $48K in the middle of last week, it bottomed out just above $44K very briefly on April 1.

As I write this, we can see that the Bitcoin price is currently trying to turn the resistance at $45K that had been so hard to break through into support:

This gives us a price of Bitcoin that is in a range between $45K and $48K at the moment.

First, the $48K to be passed, then the psychological barrier at $50K, before going to the resistance at $51.5K and $53.5K. The big bullish wave for Bitcoin would then be on its way.

If the $45K area doesn't hold and doesn’t become support, we'll have to look further down to the lower supports:

No need to complicate things at this point. Just observe the behavior of the Bitcoin price around the $45K area. The short-term keys are also there.

The Bitcoin 2022 conference starting tomorrow in Miami could have a positive impact on the price of Bitcoin by turning the $45K area into support. This could give enough impulse to the price of Bitcoin by bringing in more retail investors. We could then have the famous spark on Bitcoin demand that we have been waiting for several weeks.

In any case, it will be interesting to follow this conference to discover the speeches of the different participants and possible important announcements for the future of Bitcoin.

In the meantime, one word: Stay Strong, Stay Bitcoin HODLers!