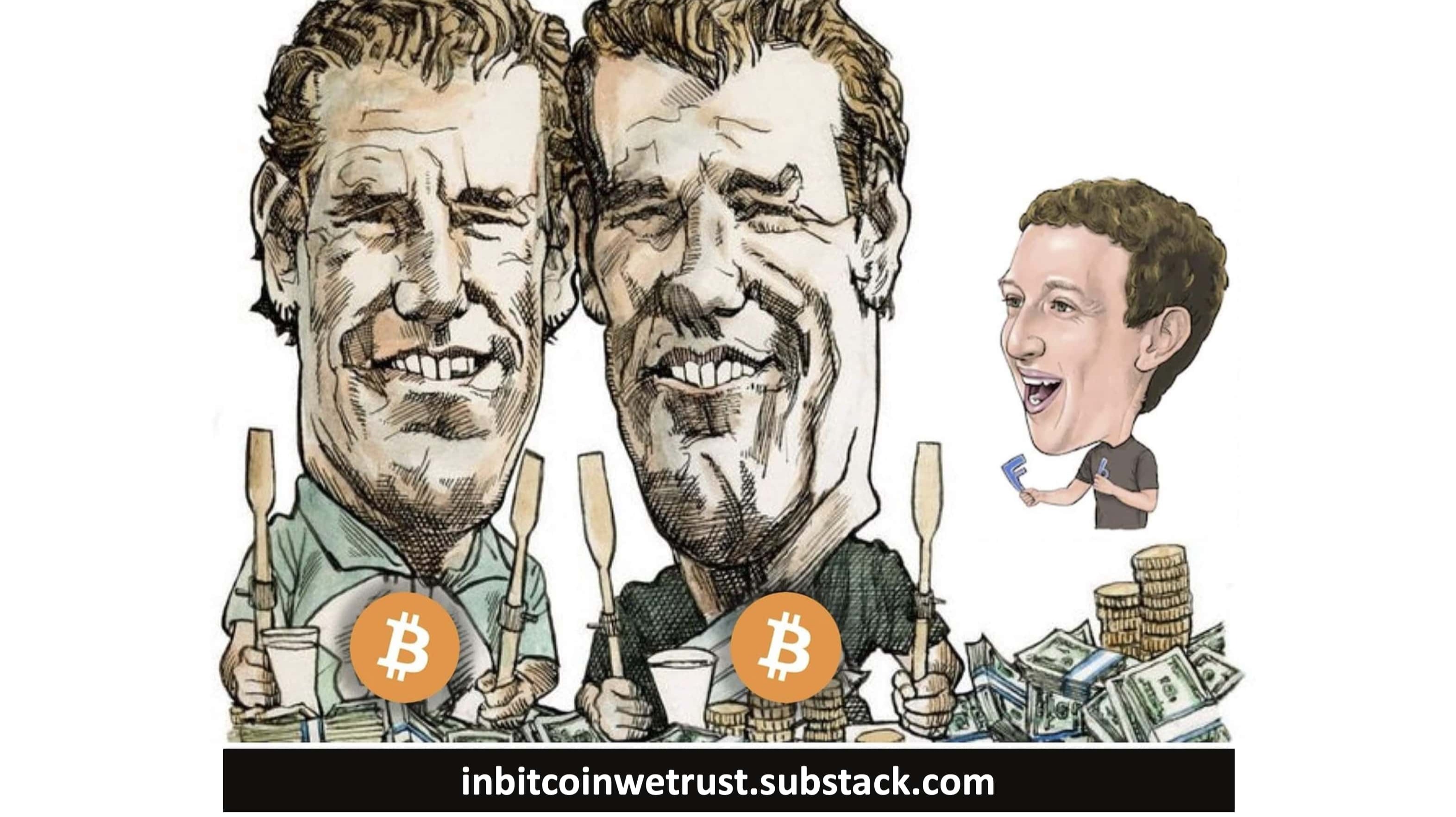 Holding 150,000 BTC, the Winklevoss Twins Are on Their Way to Getting Revenge on Mark Zuckerberg.

In the Bitcoin world, the Winklevoss twins are among the voices that count more than the others. Tyler and Cameron Winklevoss made the Bitcoin bet before anyone else. Today, as Bitcoin is around $40K, they are greatly rewarded for believing in Bitcoin at a time when it was still confidential.

Their story is all the more incredible since their name is forever associated with that of Mark Zuckerberg who is considered by the general public as the founder of Facebook.

However, the true history of Facebook is much more complex than it seems.

The Winklevoss twins became famous thanks to the film The Social Network, dedicated to the genesis of Facebook. This film made it clear that the original idea of Facebook was to their credit. While they were students at Harvard at the same time as Mark Zuckerberg, Tyler and Cameron approached him to develop their own social network project, ConnectU.

Aware that he had stumbled upon an idea with revolutionary potential, Mark Zuckerberg took the money but did not develop the Winklevoss twins’ project. He worked on his own, developing what was to become Facebook.

In the late 2000s, the Winklevoss twins and a third Harvard student sued Mark Zuckerberg accusing him of stealing some of their ideas to develop Facebook, which was to become an incredible global success.

This murky story, which shows Mark Zuckerberg’s unscrupulous character, was immortalized by David Fincher in The Social Network. Released in 2010, the film was a worldwide success and won three Oscars. It shows Tyler and Cameron Winklevoss, as two archetypes of the son of the wealthy East Coast family, claiming to have been robbed of the idea of the century.

The legal proceedings of this “Facebook affair” were going to know their term by an amicable agreement. In 2008, Tyler and Cameron split the $65 million with $20 million in cash and $45 million in Facebook shares. At the time, the social network Facebook weighed barely $10 billion.

Today, the giant Facebook reigns supreme in the world of social networks and weighs $762 billion. The Winklevoss twins would have cause for regret.

Tyler and Cameron had regrets when in 2010, faced with Facebook’s exponential growth, they decided to challenge in court the $65 million initially received in compensation. After several judges ruled in favor of Mark Zuckerberg and Facebook, the twins finally abandoned the idea of going to the Supreme Court in mid-2011.

It was time for Tyler and Cameron to move on and leave this painful past behind them.

A few months later, in August 2012, the Winklevoss twins take a good time in Ibiza. They enjoy their vacations and the Blue Marlin, a famous club in Ibiza. During a change of DJ, a man takes advantage of this key moment when it becomes possible to hear each other again to come and talk to Tyler and Cameron.

This man’s name is David Azar. The young man approaches the table of the Winklevoss twins. Looking for a pretext to approach them, David Azar evokes a mutual friend in New York. This first attempt is a failure. David Azar changes his strategy and decides to approach them frankly. He asks Cameron Winklevoss if he has ever heard of Bitcoin.

Better yet, David Azar asks Cameron Winklevoss if he is willing to invest in this new world that he says will have a bright future.

The exchange is brief, but contact is made. As Nathaniel Popper would later write in his book “Digital Gold”, those two minutes changed the lives of the Winklevoss brothers forever.

Upon their return to New York, the Winklevoss brothers, who had just launched the investment company Winklevoss Capital together, jumped into the water. They injected more than $1 million into the BitInstant trading platform founded by Charlie Shrem, of which David Azar was a partner.

Convinced, before almost anyone else, of the incredible future that awaited Bitcoin, the two natives of Southampton, New York, buy $11 million worth of Bitcoin. This figure is not unusual today, but at the time, it represented 1% of the circulating supply of Bitcoin.

Investing that much money in Bitcoin at that time was phenomenal.

At that time, Bitcoin wasn’t even worth 10 dollars. The risk that the network would fail was very real. Bitcoin was starting to suffer from a sulfurous reputation. By 2013, the lack of professionalism of Charlie Shrem and David Azar will quickly become a concern.

According to Tyler and Cameron, the services offered by BitInstant are insufficient and the security flaws are very worrying, while Bitcoin starts to take off to exceed $300. The great strength of the Winklevoss twins is that they have taken a professional approach from the beginning.

Within a few months, the unregulated BitInstant platform, which drains more than 20% of the market, was drowning in complaints from nearly 20,000 customers, mostly individuals. To make matters worse, Charlie Shrem was arrested by the police in 2014 in connection with the “Silk Road” scandal. Silk Road was an opaque site where illegal products (drugs, weapons, …) were sold. After pleading guilty, the CEO of BitInstant was sentenced to two years in prison. His platform then went bankrupt.

Faced with so many problems, many would have thrown in the towel.

The Winklevoss twins decide to continue to believe in Bitcoin. They are convinced of the incredible potential that awaits Gold 2.0 and they don’t want to miss the idea of the century again. An idea that has the potential to become even bigger than Facebook. An idea that should allow them to take their revenge on destiny.

Despite losing their original $1 million stakes in BitInstant, the Winklevoss twins are still owning a lot of BTC. They decide to continue in the Bitcoin world by founding their own specialized structure called Winklevoss Bitcoin Trust.

This merging duo takes advantage of each other’s qualities to move forward. Tyler had this idea that will make all the difference afterward. Another strength at this point in Bitcoin’s history is that they realized that if Bitcoin were to become something major, they would need solutions to connect it to the world of finance.

Therefore, as early as 2014, Tyler and Cameron are the first to file with the SEC to create a Bitcoin ETF. At the time, it was a real gamble. Everything had to be built in the Bitcoin world. The Winklevoss twins suspected that their project was unlikely to succeed. The SEC rejected it, but the important thing for them was elsewhere: they made initial contacts with the SEC that would allow them to make a date for the future.

The goal here was also to mark their territory so as not to repeat their past mistake made with Facebook.

At the head of Gemini and more than 150,000 BTC, the Winklevoss twins are ready to take their revenge on Mark Zuckerberg

In addition to taking advantage of Bitcoin’s soaring price to invest in numerous startups via Winklevoss Capital, they are working on launching their own trading platform, which will be launched in 2015. Today, Gemini is one of the heavyweights in the sector.

While Gemini cannot compete with Coinbase in terms of daily volumes, Gemini’s influence and notoriety are very important in the United States. For example, Gemini was the first platform to receive its BitLicense. This is the name given to the authorizations issued by the State of New York for companies in the cryptocurrency world. The New York Department of Financial Services has issued very few of these licenses.

This is proof once again that the Winklevoss twins understood the importance of moving forward step by step within the framework defined by the regulator in order not to see their nascent empire collapse. Since that time, the Winklevoss twins have also taken advantage of every significant drop in the price of Bitcoin to buy more BTC. They believe in Bitcoin more than anything else and have the ambition to be among those who will benefit the most from it.

At the time of this writing, Bitcoin's price is $41.7K. The Winklevoss twins own at least 150,000 BTC. This makes a fortune in Bitcoin of over $6.255 billion. Tyler and Cameron must have watched this with amusement as Bitcoin has now surpassed Meta’s market cap (the new name of Facebook):

The most extraordinary thing here is that this is just the beginning of the Bitcoin revolution.

Of course, Tyler and Cameron Winklevoss will tell you that they have long since moved on. Nevertheless, this perspective must delight them, they who never forgave Mark Zuckerberg for his betrayal in the mid-2000s. That would be a nice thumb of history, and proof that Bitcoin always rewards those who believe totally in its revolution.

The years to come will tell us more about this magnificent revenge that the Winklevoss twins will be able to take on Mark Zuckerberg thanks to Bitcoin.