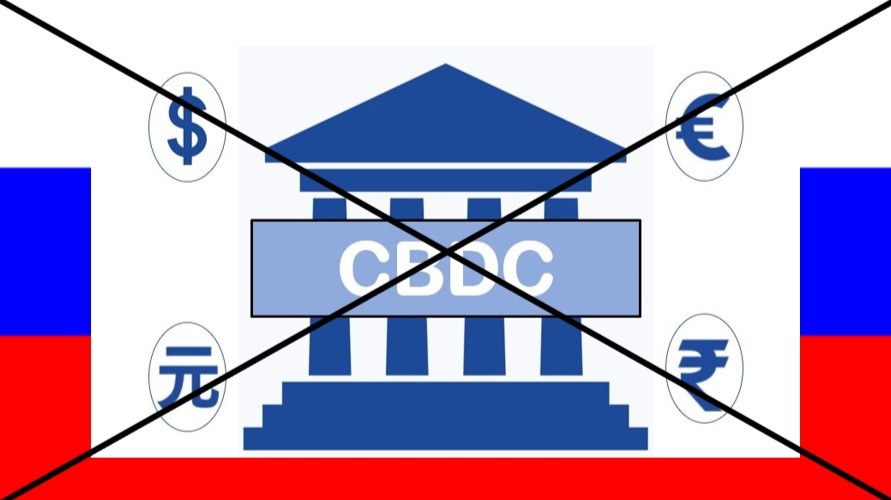 Earlier this week, we discussed a host of conspiracy theories released by the Bank of Russia. Debunking them together was satisfying to say the least. So much so that I couldn’t resist coming back to one more “gem” from the Bank’s declaration that put into focus the real reason why Russia’s Central Bank, or any Central Bank for that matter, would try to sow confusion around Bitcoin for citizens who may not know better:

In recent years, the Bank of Russia and many foreign central banks have been extensively deploying faster payments systems meeting individuals’ and companies’ needs in instantaneous settlements. Moreover, central banks, including the Bank of Russia, are developing central bank digital currencies (CBDC), that is, a new payment infrastructure which will enable people, businesses and the government to conduct instantaneous transactions with minimal fees. Hence, the benefits of cryptocurrencies which make them attractive as payment instrument for operations other than money laundering and other illicit activities, namely high speed, convenience, relative low cost, could be realized and are already being realized through creation and development of faster payments systems and by national digital currencies in the future.

In case you didn’t catch it, the endgame for the Bank of Russia is to convince Russian citizens to choose the country’s forthcoming CBDC over Bitcoin. Longtime participants in the space know that Bitcoin and CBDCs couldn’t be more different from one another. Bitcoin enables financial sovereignty and wealth preservation for all while CBDCs put financial exclusion and oversight by governments into hyperdrive. Regardless, there are two counterpoints to the Bank of Russia’s statement that we can’t afford to overlook:

To be fair, fiat currencies have a pretty good track record as mediums of exchange. After all, history has shown that governments are willing to go to war and even throw their own citizens in jail to promote the supremacy of their domestic currency of choice. So if people just wanted a good medium of exchange, and nothing else, then maybe fiat currencies would be good enough.

Loss of purchasing power by fiat currencies has become so normal that most people, especially in developed countries, don’t even notice it. The governments of the world have programmed their currencies to lose value and have succeeded in convincing millions of people that it’s acceptable and even necessary.

All this to say that it shouldn’t be surprising that the Bank of Russia only focused on the adequacy of its CBDC as a means of exchange, completely ignoring the fact that it fails miserably at storing value. Or that the Bank of Russia avoided making any mention of Bitcoin’s superior monetary policy and track record as a store of value. They hoped we would be oblivious of the truth. Thankfully, we know better than to trust them.

You’d be forgiven if you thought I was going to only talk about Bitcoin in this section. After all, Bitcoin offers final settlement on the layer-1 blockchain every ten minutes. And I can’t help but mention layer-2 solutions like the Lightning Network, which enables instant transfers of Bitcoin which are regularly settled on the base layer blockchain.

That said, we also already have “instantaneous transactions with minimal fees” on top of fiat rails. For example, many banking and finance apps from Venmo and Paypal to Alipay and Google Pay allow users to transfer cash around the world from one second to the next, often without having to pay any fees at all.

At this point, you’re probably itching to jump in and remind me that final settlement of transactions actually takes days or weeks when banks and fintechs are involved. You’re absolutely right and that’s one of many reasons why Bitcoin, which offers settlement that is both final and instantaneous, really shines in comparison to fiat currencies and technologies built on top of them.

My point is simply this: the Bank of Russia’s CBDC is looking to solve a problem that has already been solved, since cheap, quick transactions are already possible through a number of existing technologies.

Be On The Lookout

Central Banks really don’t like Bitcoin. They can sense their impending doom and we should expect them all to go down swinging, just like the Bank of Russia is in the process of doing. It won’t be the last Central Bank to attack Bitcoin. But each of us has the ability to see through their attacks and choose for ourselves whether to follow the status quo or enter a new Bitcoin standard.