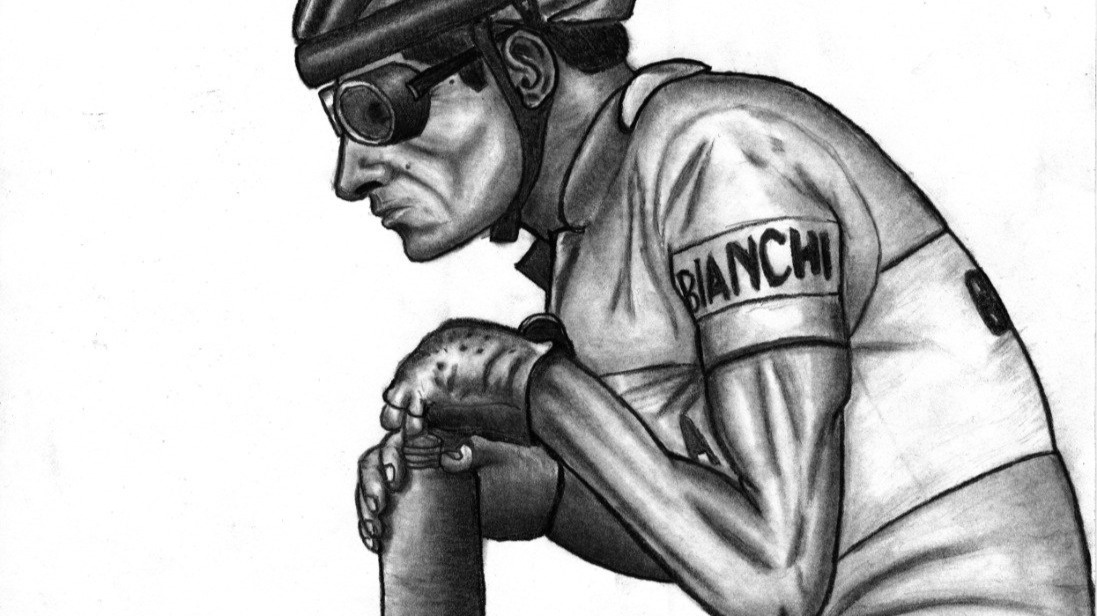 Fausto Coppi, The “AIRONE" of cycling, nicknamed in this way because instead of pedaling, he flew.

Fausto Coppi seems to have a fragile but at the same time he has characteristics that make him suitable for endurance races under stress: a remarkable muscular agility, long and muscular legs, a cardiorespiratory system out of the ordinary thanks to the wide chest, the pulmonary capacity and the very low value of the heart rate per minute measured at rest.

Fausto begins to ride in 1937 and turn professional in 1939, he beginning to collect the first victories.

In 1940 it passes in force to the Legnano, the team of Gino Bartali, and it is with this jersey that in June of the '40 wins its first Giro d'Italia. Fausto Coppi at only twenty years old is the youngest winner of a Giro d'Italia.

In November 1942 Coppi beat the hour record on November 7 on the track of the Vigorelli Velodrome in Milan.

At this point, unfortunately, the war takes over and Fausto Coppi must leave for North Africa as a corporal in the "Ravenna" division.

Taken prisoner by the British, he returned to Italy in February 1945 and, having received a bicycle as a gift thanks to the interest of the "Gazzetta dello Sport" newspaper, he began racing again. He begins again to run and to win.

Also in 1945, at the end of the war, Fausto Coppi returned home and married Bruna Ciampolini.

In 1946, to the resumption of the professional activity, Fausto Coppi leaves the Legnano of Bartali and signs for the Bianchi (the famous shirt "bianco-celeste"). The debut will take place at the Milan-Sanremo won after a solitary escape of 150 km and with a gap of 14 minutes on the 2nd arrived.

After another victory in the Giro d'Italia in 1947, 1949 is the year of the definitive consecration for Fausto Coppi: Milano-Sanremo, Giro d'Italia and Tour de France are the most important victories; no one before him was able to achieve the Giro/Tour double in the same year, by now Fausto Coppi is for everyone the "Campionissimo".

1950 will be marked by the triple fracture of the pelvis that the "Campionissimo" gets during the stage of Primolano at the Giro d'Italia, while 1951 will be even more tragic because of the death of his brother Serse Coppi that, on June 29, during the Tour of Piedmont falls 2 km from the arrival slipping because of a streetcar rail.

Although having beaten the head, Serse Coppi rises again and finishes the race but the same evening, in the hotel, he dies for cerebral hemorrhage.

Even if upset and thinking of abandoning the races Il Campionissimo after few days is introduced to the way of the Tour de France but among ups and downs it concludes him to the tenth place to 46 minutes from Louison Bobet.

In 1952 Fausto Coppi returns to be the "Campionissimo" and for the second time he centers the double Giro d'Italia-Tour de France, but few days after the end of the Grande Boucle he falls during a meeting in Perpignano fracturing his left scapula clavicle.

With 1953 comes the fifth victory in the Giro d'Italia and above all the World Road Championship in Lugano.

But it is precisely on this occasion that begins to appear alongside Fausto the White Lady: it is the beginning of the most discussed love story of cycling, that between Fausto Coppi and Giulia Occhini.

Being both already married what happens between them is violently opposed by much of public opinion and the husband of Giulia Occhini denounces both (female adultery was still a crime in those days).

This leads to night searches, the arrest of Giulia Occhini and finally to a trial at the end of which both are convicted with a suspended sentence.

They then married in Mexico and their son Angelo Fausto Coppi, known as "Faustino", was born in Argentina so He could take the surname Coppi, which would have been impossible in Italy.

In December 1959 Fausto Coppi left with some friends for a trip to Africa to participate in a competition in Ouagadougou and then in a hunting trip.

Back in Italy, the "Campionissimo" fell ill with a high fever. It was malaria contracted in Africa but the doctors made the wrong diagnosis and treated it as a strong flu. Fausto Coppi, after racing 119,078 kilometers and three hundred meters (that is three times around the Earth) died at 8:45 am on January 2, 1960, at the age of forty. 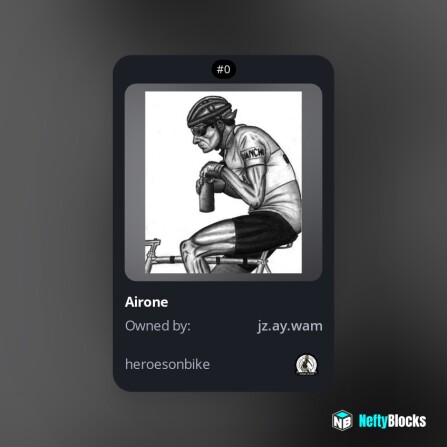 On May 6, 2022, on the occasion of the start of the Giro d'Italia, the first 9 pieces of the "Airone" sketch dedicated to Fausto Coppi will be dropped for free.

In order to redeem the artwork for free you must own at least 2 NFTs from the heroesonbike collection of the sketches schema.

On the same day will be auctioned the mint #1.

Before the drop I will be giving away to two lucky winners one NFT sketch each. Owning an Heroes on Bike NFT will always give benefits, in the short term you can redeem upcoming drops for free.

historical cycling passion, research in the past to learn something to exploit in the future!

This is the blog of the instagram page @heroesonbike You'll find extra content that I can't post due to space constraints in terms of writing character limits. I hope that opening this space will help spread the stories of cyclists that would otherwise go forgotten!