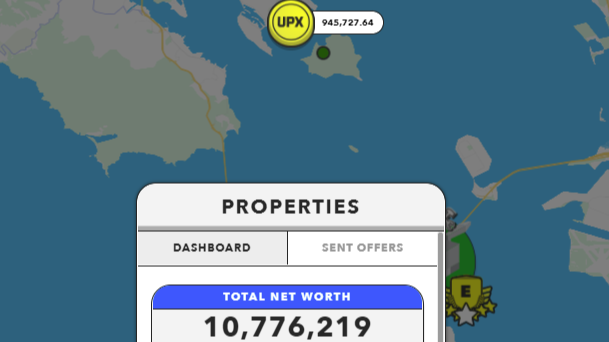 How do I get the best start?

A question I get asked daily is how to maximize UPX. Everyone wants to know how to make their UPX grow, especially in the beginning when there’s not much UPX for a new player.

There are a few ways for a Visitor who is looking to get to Uplander to achieve their goal. The first is to sign up with someone’s referral link and make a deal. The second is to ask for help from established players by having them visit a property you own. Third would be to put some money in to boost your net worth to at least 10k. The fourth option I see is to treasure hunt, but only if you know what you’re doing. Lastly, is waiting on the monthly income to accrue and continually renewing your visa.

Obviously, some of these are more likely and doable than others, but I still want to provide as many options as I can.

The first option for a Visitor working on getting to Uplander is to strike a deal with someone who is already playing. This only works if you aren’t already in Upland, so may not be completely viable for some, but still worth mentioning. Say you wanted to use my referral code to get started. I would provide it to you and you’d sign up like normal. After you’ve signed up, and while you’re still visitor, you can receive more for your first purchase; 50% more actually. Meaning if you sign up with my referral link, and buy 100,000 UPX, you’ll also get an additional 50,000 UPX and so will I. If you are not interested in spending any money, there are still those who will assist in sponsoring a new player and helping them to Uplander in exchange for fair start act (FSA) properties.

FSA purchases are only available to people with a net worth less than 100,000. Until then, you’re able to purchase FSA props and if you have a deal already established, you can buy the FSA props, which are less than regular properties, and sell to your sponsor for a previously determined markup. This works well for both parties as the sponsor is able to purchase FSAs they need and the new player gets liquid and net worth quickly and reliably.

The second option is to ask for help from other players. There are groups who are willing to send to a new player’s property to assist them in getting to Uplander. Typically, they’ll have requests such as not begging, being kind to other players, answering questions, and being social and active. It’s not too much to ask for new players to contribute to the community, especially if they’re asking for UPX.

The third is the simplest and fastest option. Buy UPX with USD or Cryptos on a web browser and you’ll be at Uplander. This option is simple and works really well if you can afford to pay. If you do pay, you can start buying better properties immediately as you have more UPX at your disposal and can start flipping for profit because you’re already an Uplander. Buying UPX on the web browser is the best option as they don’t charge extras, whereas Apple and Android will both add a fee to the UPX purchase. Cryptos can also be used for purchases, but only on a web browser as well.

I have a long post on my blog about treasure hunts and how they can be salt inducing and difficult for new players. The best way to treasure hunt is to have properties around the city to minimize the amount of sends needed, which obviously isn’t a possibility for new players. Even though it’s difficult, it’s possible to hunt with only a few properties. Make sure to have plenty of sends available before treasure hunting and look over my previous post for more tips as well.

The last option I see for new Visitors is to wait and let the monthly income accrue. Personally, I think this option is terrible as it doesn’t show the true nature of Upland and really isn’t a good option at all.

We’ve worked through going from Visitor to Uplander, now what?

I’m going to use a lot of hypotheticals here, because anyone can give you ideas and urge you in a direction, but it’s up to you to make deals and put the time in. Some players are happy selling two FSAs a week and waiting until the next week to do it again. Others are way more ambitious and aren’t happy with only selling two props per week so they mint non-FSA props to sell and/or buy and sell off the secondary marketplace.

Oakland was released late last week after several stress tests, and there’s another wave coming. I originally wrote this with Oakland in mind, but with the release of 4 more cities where at least 2 are planned for May, it seems more appropriate than ever. I’ll be using collection names from Oakland, but this is true for any new city release.

Pretend I'm a new player and a new city is being opened within the next week. I'm going to start by researching the city’s collections, the neighborhood’s base prices, and procuring as much UPX as possible. We’ll say I was able to raise 20k UPX to spend for the sake of this exercise.

It’s time for the city to release, and I’m going to mint the props I want as fast as I can. I’m going to start by buying what I can in terms of collection pieces, specifically Piedmont and Temescal which have the lowest base prices and modifiers of the collections.

Also, I’m keeping in mind FSAs are cheaper than non-FSAs, but only 2 per week can be sold. If I’m not selling the property, obviously the 2/week sale limit doesn’t matter, but if I’m looking to flip for profit, I need to be mindful of my purchases.

I specify it this way, because a lot of new players have FSA fever as they are cheap and affordable props, but get stuck with a lot of low earning FSAs which are going to take months to sell.

Now, I'm going to pay special attention to pick up a couple more collection props than I need, and not pay much/any attention to the other collections. Depending on liquid, I might go after Rockridge or Shafter, but likely not both. Then, before the next wave, I'll list the props for what I'd like to make combined with their worth. We’ll say my Piedmont props were 4k, 5k, 5k, and 6k. The earnings aren't a whole lot in the beginning for the smaller collections, so maybe I list the 6k and 5k for 30k and 29k respectively. Fear of missing out (FOMO) sets in, someone thinks the deal is outstanding, or someone wants to complete their collection and they sell. Now I have a collection, which means boosted earnings for those props and a one-time bonus, as well as 59k (48k profit) liquid for the next wave. During which I can either go after Shafter and/or Rockridge and if I get extra, sell them for another nice markup or just sit happy on my collections.

This might sound like a really exciting opportunity, but now you want to see how to maximize your profits from a new city. I am a firm believer in completing collections, especially in a new city where minting a collection is statistically the cheapest it will ever be. However, with how new cities are right now, it can be hard to complete all the collections you want as collection areas are selling out within seconds of opening.

Now, let’s say you have 70k for the release and you only bought a single collection FSA property for all your UPX. Buying the rest of the collection isn’t going to be feasible as the props are marked up 5-6x as soon as the release is finished. List your property for 5-6x as well, because 5-6x for an FSA is cheaper than a regular property.

Buying and selling properties is a good place to start. If you flip quick, you’ll get money back quickly, but it’ll take a while to get a lot of profit back from that. If you buy a lot in an area and then list for 2x their mint price, they’ll likely sell once the floor raises to that amount. It takes time to figure out this strategy, and might cause some grief starting out, but it’s good to know how to use both to your advantage.

Hopefully this helps give you an idea on how to make your UPX matter in the early parts of your game as well as gives you some ideas on how to continue to grow after you hit Uplander and Pro.

Strategy guru who loves challenges and solving problems and riddles.