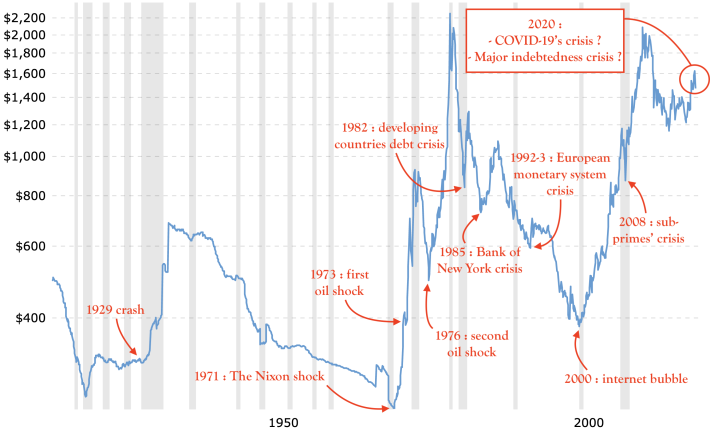 So I made this graph using macrotrends. It shows us something very well known since a very long time : when major crisis strikes, gold shines. In every major crisis the price of gold have shown a slight descent before beginning its shining path to heaven.

Genesis of a crisis

How is that possible ? That's somehow complicated and simple to understand. I'll go on the easy path here with some parallels to our actual situation : when a major event strikes people first watch, evaluate. What're the risks for themselves ? Will this event approach their own sphere ? Maybe it is time to safely begin to withdraw the funds that were in the endangered zone.

On the SARS-CoV-2 announcement the whole world was watching what the Chinese were doing. They faced cities' containment, companies slowed or even stopped. Anxiety grew as the virus began to spread to other countries around China. Some companies (Apple for example) had their production chain into difficult position not being able to ensure shipping. Some advised persons decided to begin withdraw funds and the international companies located close to the damaged area began to slow their growth (or even stopped it).

Then the event begins to export itself using our very own globalisation products (planes, boat, etc.). This event comes closer to our borders. On first it is contained. We assume we control it. Confidence stands on our system and we continue to invest but wisely and more locally.

Some new cases were announced between mid/end-January imported to occidental countries. Economical growth continued but everyone kept an eye on the daily news. And technology brought us incredible systems that even allowed us to receive hourly news directly in our pocket, on our watches, in our cars... And the fear spread easier than ever. The bomb was ready to explode, the mesh was on.

Suddenly appears something new : the event is not only overflowing from its original location to ours, but it is actively spreading everywhere it goes. And this is the moment fear becomes anxiety and the majority begins to protect whatever they may have.

By February the virus spread to Italy and due to local conditions it contaminated thousands of people in record time. At this very moment the occident realised it wasn't immune ! Anxiety plunged the markets below any long term resistances between the 24th and the 25th of February. Everyone wanted its cash back not knowing which companies would be affected. Later it was the containment measures that wouldn't help as companies weren't be able anymore to produce.

Confidence has yet disappeared and sadly the lack of charity in our world blows up in everyone's face...

But what happens to gold in such setting ? Well on first, paper gold is sold as quickly as the rest because it is easy cash coming back home. Some would even spend their physical gold. The price follows the market. However, as the economy falls deeply, the government tries to protect their positions by any means necessary. And the easiest way is to print money, tons of paper and ink to try catching a collapsing economy. Money loses its value, but people need to live, to buy food, and moreover to insure their future. What better way than surge into physical limited and recognised precious resources ?

Parameters used for the market analysis :

It is now time to analyse what gold is becoming those days. 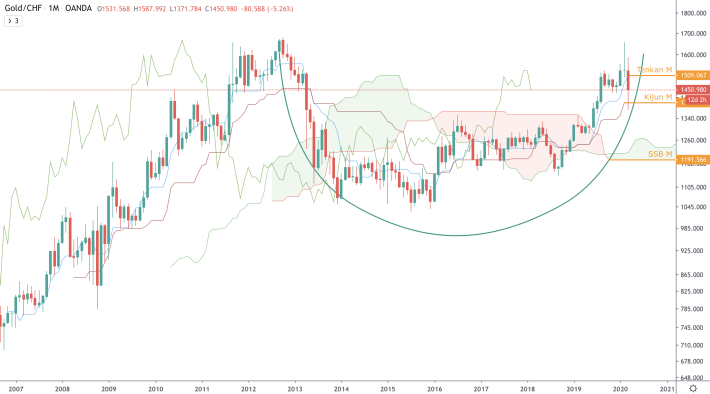 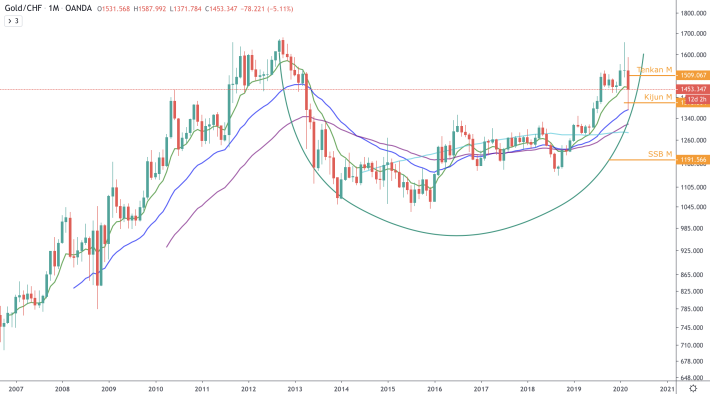 Gold price came down this month following the stock market. The month isn't yet over but it went down touching EMA 26. This is a good information but the most important one is the cup designed.

It looks like gold was already predicting a massive crisis probably linked to the indebtedness our society is living in. Looking at this graph we could assume coronavirus outbreak was only the straw that broke the camel's back. 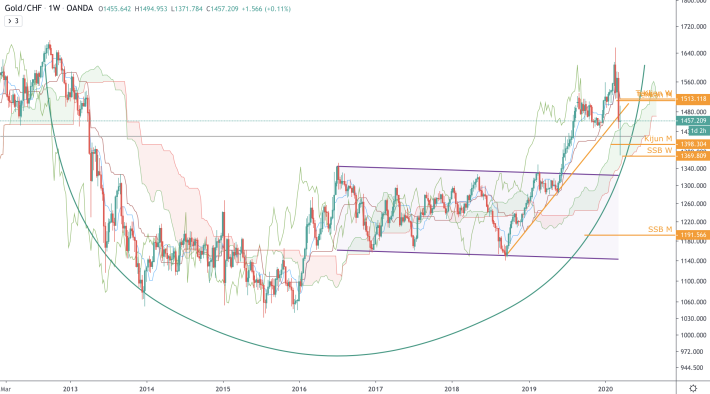 On Ichimoku's side, it recently broke the signals while crossing Tenkan & Kijun weekly, but it staid above the cloud maintaining its bullish long term position. Volatility has been very important this week as the price was moving in a range of 8% which is very rare in gold. But for now it stays bullish. 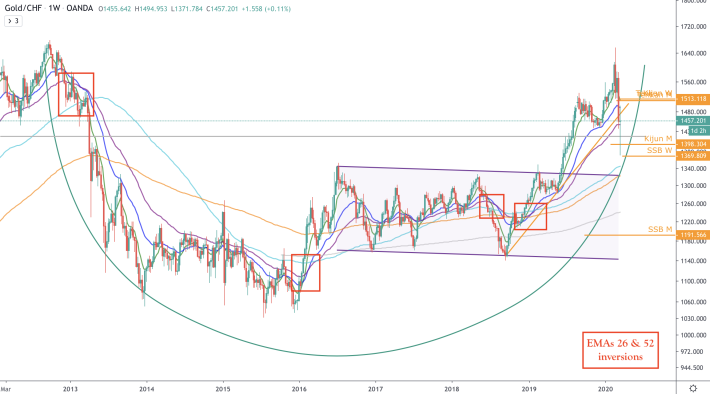 Looking at EMAs, we can see that the trend is indicated by EMAs 26 and 50 crossovers. Those very important points are indicated into red rectangles on the graph. The last one happened during the week of the 14th of January and indicated a massive new uptrend allowing the cup to take shape.

We can also see how EMAs 26 and 50 serve as supports and resistances during all this way. And by now the price has just support EMA 50. But still we need to for the market closing tomorrow to confirm this statement. 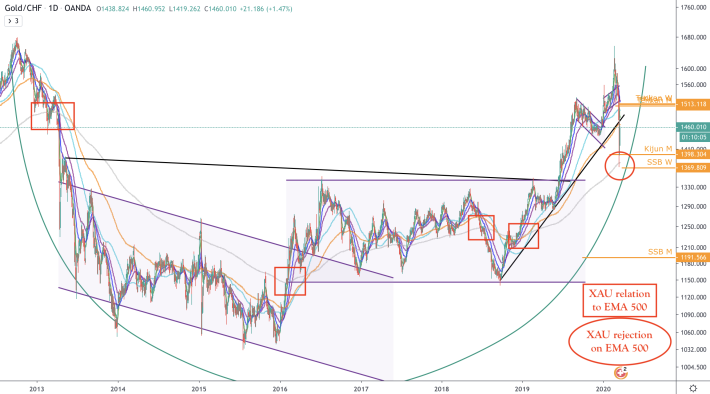 On the long term daily trend has always been enlightened by EMA 500. On the graph you may see in the red rectangles how EMA 500 indicated the price was changing its long term trend. The last crossover was around mid-December 2019 right after the same EMA supported the price during most of the three years range.

In the circle we may see that EMA 500 rejected the price when it tried to follow the stock market crash. 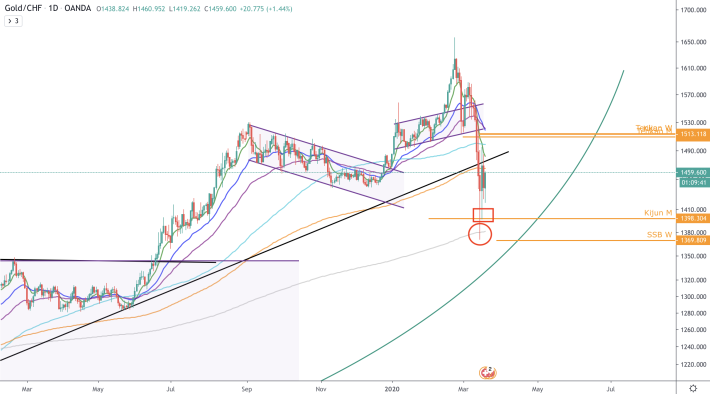 When zooming in, the price hit first EMA 500 (red circle) and was rejected, then it did the same on Kijun monthly the following day (red rectangle). Price faced two attempts to be brought on its knees as massive sell off was triggered all around the world. But now it is stabilising its new position.

Now that the crisis has struck, people first tried to sell off and protect cash. But crisis seems to be doing what it usually does : it stabilises gold price before making it rise.

Two reasons can explain this phenomenon. The first was already explained into the paragraph "Genesis of a crisis". The second one is that a pandemic crisis will not only break the market, but it will also bring miners into quarantine measures. First they try to keep producing. But then their business can be affected too. The area in which they live may fall into more restrictive quarantine laws. They will then stop producing.

But gold is not only linked to miners. It must be transformed into gold bullions to be shipped and sold. Those factories may even be affected before the miners. Miners work in large areas but bullion producers work into restricted areas/buildings. Oh and I said "shipped" also. Of course during a crisis you may not trust the paper gold and would like to own your own bullions into your basement. And so on...

Compelling all those informations we may come to a simple economical conclusion : crisis increases gold demand (a limited asset in quantity) and pandemic reduces potential gold supply.

It is now time to buy and hold physical gold !

I would like to end this article with a quote :

Those words come from a very wise man that went threw many crisis and perfectly knows what he is doing. I strongly recommend you hear his interview on King World News website : KWN interview of Pierre Lassonde. And don't ignore that canon just fired its first wrecking ball...

This article is shared threw my new Telegram channel GoldLeoSwitzerland. Don't hesitate to follow me there if you're interested into gold and miners investment.

Please tip if you like this article as it encourages me to continue this hard work !

Offering precious metals and miners analysis based on the market. You can always ask If you have questions or analysis requirement and I'll do my best to send them as fast as possible. For instant updates : https://t.me/GoldLeoSwitzerland 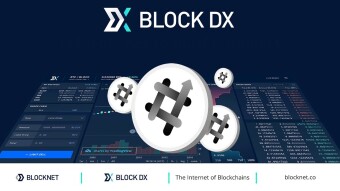