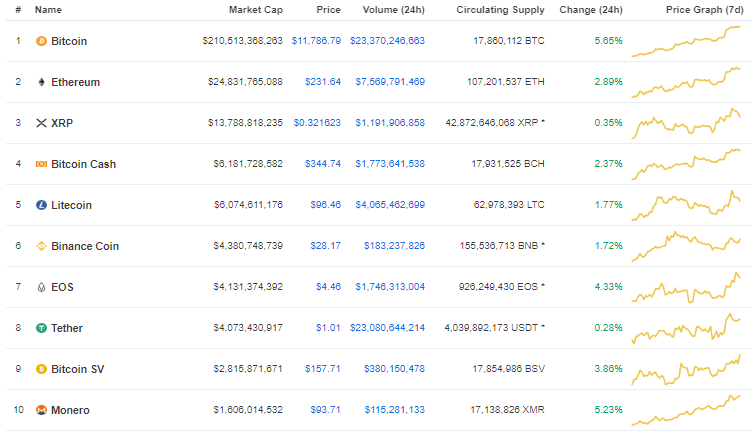 In one week Bitcoin has gone up from around $9,500.00 to about $11,800.00 at the time of this post. This trend has been followed by a lot of the other top 100 in market cap coins. This is great news for all the people who have been nervous lately as I know the bad performnce of alt coins was hitting many people hard, it appears things are OK for now and I hope they continue like this.

How far up will Bitcoin go this time? I a still waiting on it to reach $15,000.00 which I think is the turning point if it gets there it will likely go to new heights and we will see a new Bitcoin price record, I am also hoping this is so as it would make crypto so much more popular and on its way to mainstream. But we shall have to wait this market is volatile and anything could happen.

The one coin that seems to be unaffected by the Bitcoin surge is Steem, if Bitcoin goes down it goes down but for some reason unlike other coins when Bitcoin goes up Steem remains in something like hybernation. I sure wish this coin could surge but I have no idea what it will take for this to happen, I understand it takes investors to have a surge but by now Steem is very well known, I think it should be one of the real growth trenders but it isn't. Well that surge is another we will have to wait for.