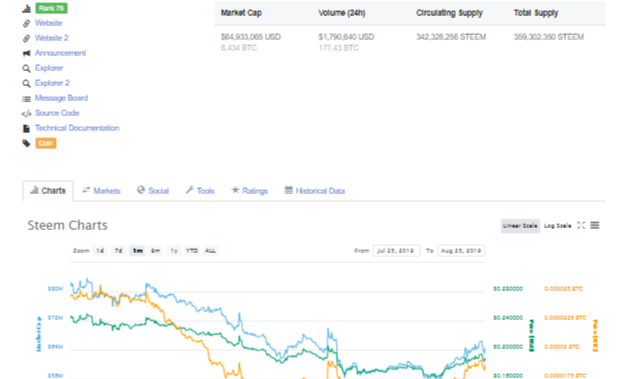 At Last Steem Goes Up Measurably

Of course this is great because besides the optimistic feeling a rise in prices gives us it also means that at last Steem was able to get above the 80th place in market cap right now it stands at 78th, well at least that looks good when reading the alt coins list.

Does this mean Steem is now ready to go sky high? I would rather think not, even if we do try to give this hike the most positive spin we can, it still doesn't deny the fact that just one month ago the price was very close to $0.25 which was the lowest it had been all year, so to think we are now in the clear is wishful thinking.

Now we will have to wait until September to see what effect, if any, HF21 has on Steem's price. this is really iffy it could turn out to be a blessing or a curse we do have to wait for that though, because the effects I don't think will be able to be measured until say a week or two after the 27th.