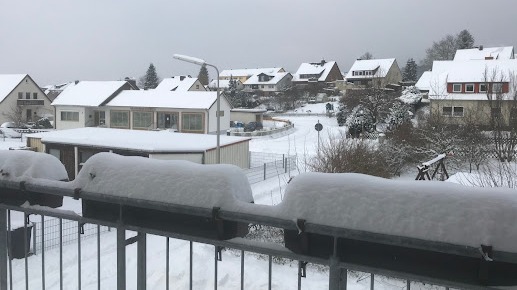 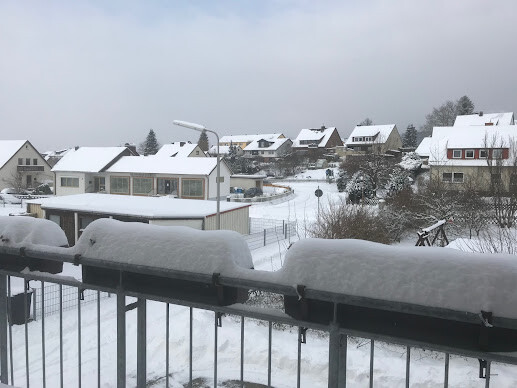 Every time I take pictures like this one from my bedroom window to send them to my family in Morocco, I know their reaction: "Wow! So nice, so calm and peaceful!", and I have to admit, even after four winters in Germany I am still taken by such views. I think, it is impossible to get used to this breathtaking whitness covering the roofs, streets and every tiny bit of visible grayness or dirt.

If you expect to see snow on time for Christmas, there are big chances, you may be disappointed. Snowy days are definitely more typical for the coldest months: January and February. What´s more, even though you actually expect white winters here, in the last time it was snowing sparingly, till ...this week.

Already last week we heard that there is lots of snow expected starting Sunday and indeed, that´s what my street looked like on Sunday morning. 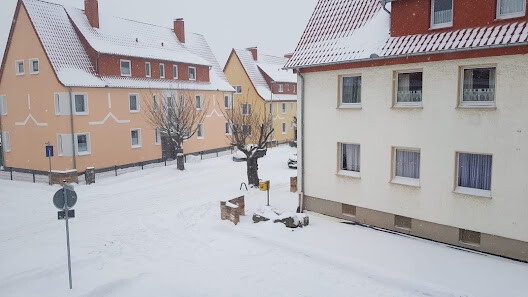 Honestly, I thought "That´s it", yes, it is snow, but nothing to be warned from. In the neighbourhood the children built snowmen and everyone seemed to enjoy the winter. 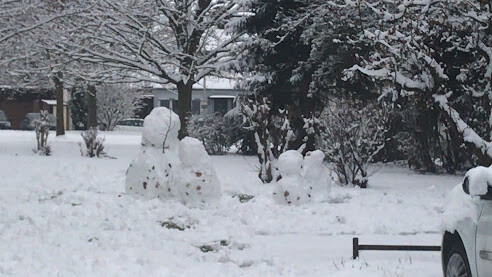 Inspired by the snowmen family nextdoors, we have also constructed the Moroccan version which has almost given a heart attack to our cat. 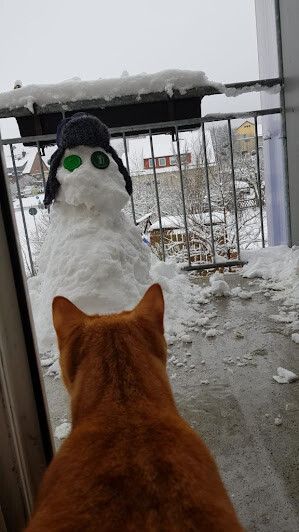 That was still on Sunday, but later that day it stated snowing again and this time in combination with very law temperatures (-16) the snow instead of disappearing accummulated more and more. All the trains stops and already in the evening the students got a message that there will be no school the following day. Many people got stuck in the railway stations without any chance to travel any farther and in the news we saw the "hotel trains" where the passengers were given the chance to spend the night waiting for the next possibility to travel.

Today it´s Thursday and it is clear, there is no school the whole week. The whole public transportation in the area I live (and it´s not in the mountains where there is even way more snow) hasn´t been working since last Sunday. If you want to go anywhere by car, first, your car looks like the one below. You have to remove all the snow. Sometimes you clean the left side and by the time you have finished the other one, the first one is covered again, just like it was a few minutes ago. 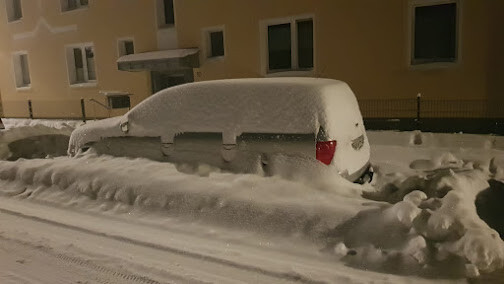 The other problem are the masses of snow which can be only moved from one side to another, but not permamently removed. There is a law making all the landlords removing the snow from the sidewalks close to their houses, so they move it to street. The town sends snow plows moving the snow from the streets to the sides or to the sidewalks. Most often it results in the big snow mountains on the sides of the streets taking all the space where you wish to park your car, and if you happen to have already parked there, you have to move the snow mountain out of your way or wait with using the car for spring. 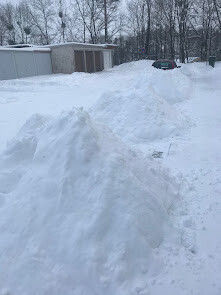 Can you spot the car in the end of the street? It wasn´t here in the morning, someone was driving it, but just a few hours later, it is there completely blocked by the snow mountains made by landlord of the house to the right and the snow plow which has moved from in front of the garages.

Meanwhile, even on the famous German highways the situation is really bad with countless accidents caused by ice, snow and general bad driving conditions. The traffic jams are 40-70 km long and many people are forced to spend not only hours but even the whole night in the car waiting for the traffic jam to dissolve.    But is it nice to walk in the snow? It is a special feeling, but I can best compare it to jogging on the beach. It is much harder, you are tired much faster. Additionally, unless you happen to ear special snow shoes, the snow in form of icy water will get into your socks and numb your feet with cold.

I still enjoy looking at the immaculate white snow and the snow flakes dancing behind the window, but this week I have started to be thankful for no-snow climate in my home country. 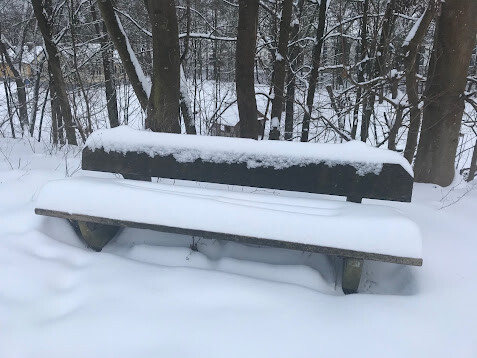 The bench in the park close to my house. 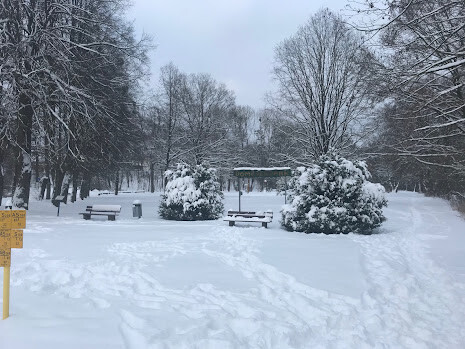 I am sharing my personal experience and what I have learnt while applying for visas, looking for jobs, trying to improve the language and living and working in Germany.

A blog for all who live outside EU and wonder about legal ways to move to Germany. I am sharing my personal experience and what I have learnt while applying for visas, looking for jobs, trying to improve the language and living and working in Germany.