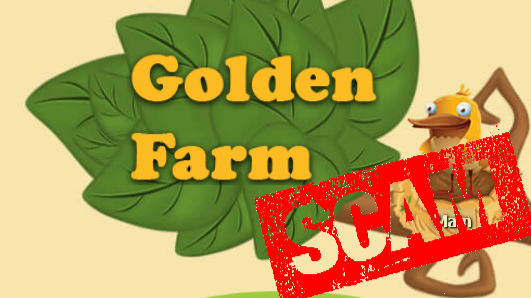 How did I get caught?

You know the saying "When something seems to good to be true, it means it really is..."

Well the point it I thought it wasn't... that much. I mean If You read my previous post about Golden-Farm, You probably remember how I were saying that they most likely just "investing those users' money in crypto mining or something else", and that with "how strong the system encourage replenishing accounts by paying them some real money" they perhaps could really make it and thus this platform really let people get some money... but even though it seems so at the beginning, but it turned out it's not like that...

So how it really is - or "always read the fine print"

You may remember how in my last article I was saying that I did withdraw a small amount without a problem. Well a while ago I did tried to withdraw some more. On my account for withdrawal were silvercoins worth about 13$ (If I wouldn't new swap them to account for purchases before, it would be probably more). I also notices... That actually by withdrawing them and then replenish with the same sum I will get... more silver coins that I would for simply swapping them! (Including the fees)

Let me show You. For easier calculation we just go with 10$ payout, that would be...

And how much we can get if we replenish account by 10$? 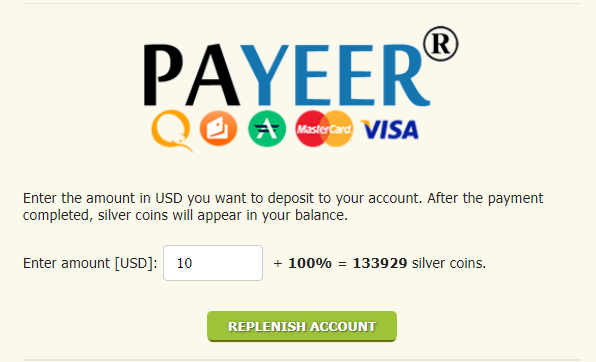 133,929 silvercoins! Much more! (less than twice the silver coins needed to get 10$, but it's obvious considering there is a fee). So it mean basically You can have multiply the silvercoins for buying new birds much more effectively.

Ok, where's the bait? Surely they wouldn't do it this way if the only price for the better deal was waiting right? Of course!

And I did learn It myself when I tried to withdraw my 13$. How? Well do you think I could do that?

The answer is obviously... NOT!

I get the message about having not enough gold.
"WHAT GOLD ARE THEY TELLING ABOUT!?" - I was thinking. Well, I did discover that by going to their - of course long, bureaucratic-styled and meant-to-bored-out-to-death-or-at-least-skipping-it - rules and use the search function with the word "gold". So it turned out You need gold for that. As the rules say:

Getting payoffs by the user is restricted by availability of gold on the account. 1 gold gives the right to withdraw 1 USD.

Ok, this doesn't sound that bad... But the main question is: how You can get it? Well, the answer was just after that...

...but it was that clear. 40% of what actually? The silvercoin You get? The money You put in that? For silvercoin it would be somewhat understandale and fair, though surely That will be not for the "basic" unit of gold, but it's smallest part (0.01 - it is the smallest amount of gold which the site seem to recognize - quite logical as this is for withdraw 1 cent), so with 133,929 we would get to move the decimal point by two and get 1,339.29, make it to just 40% so it will give 535.71 (rounded down) - ok... maybe too much but if we make it 53,57 it seems reasonable. Investing platform, which let You - after longer time get 5 times what You invested seem fair...

It's not like that though. It's about invested dolars. It was hard to get the answer from the support. They avoid of giving me precise answer to my question, instead they throw bunch of other stuff about other way of gettings golden etc. 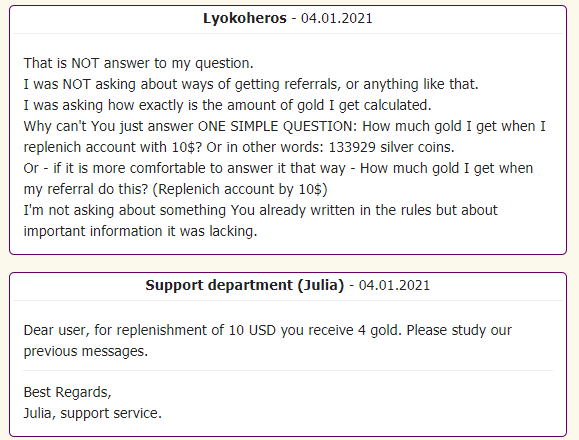 Well, not that surprising. Telling "For 10 bucks You put in our site You will be able to withdraw just 4 of them" isn't exaclty what they would want to tell You. They would rather telling You about other ways of getting it and distract You from the fact that You can even withdraw the money You put here... when You calculate how it relates to reffering system You can see, that for every dollar put there only 0.4$+0.2$+0.05$=0.65$ can ever be withdrawed. For every 1$ invested in the website they will earn - at least - 0.35$. A golden interes, indeed, but only for them...

"You don't have to be scammed by us. You can scam others instead, and we will even help You do that!"

Ok, I don't know if they help do that is really true. But consider some materials I find they would.

Remember how I tell You about some people claiming "it's not a scam, some people just don't understand how the site is working" and I agreed with them? I shouldn't. Because it's a lie.

Well of course if You get a lot of referrals, You can get enough gold to withdraw more than You invested, they even have a special program that lets You buy some referrals, for real money, by assigning some of the people, who register to website from their advertisement. So it works! Well... nope.

For every 1$ put into the website only 0.65$ leaves it. You can get some golden coins, but to do that You have to get referrals who will be able to withdraw less than what they invested. So You actually help in robbing them. Well, they can also get referrals, but that would mean only they would rob someone to make up for being robed themself. The chain of referral could grow infinite, and the people at its beginning will benefit. Those at the end lose money. This encourages them to attach a new one to benefit from the platform too(so actually: to scam others for make up for being scammed). But the number of people is limited, it can't go that way infinitely.

And as I say - You are actually robbing another person for make up for being robbed. In other words: If someone stole 6 bucks from You does it mean You can steal the same amount from some other people and it will be fair? No, and neither is Golden-Farm fair.

Being scam or not isn't merely about "if You can benefit from it". Is more about if it's fair to users. The absolute minimum for any platform to be fair is if they actually can withdraw AT LEAST as much as they put into it (without losing some of them by taking such risk willingly for example in bets or another form of gambling). And in general, only 65% of what users put into this platform will be even possible to withdraw.

So after all it is a scam. Well If You are dishonest and fraudulent You can benefit from it but only by scamming others. And even if You try (which I hope You wouldn't do!) You are not guaranteed to actually being successful in that.

And I'm terribly sorry if any of You did invest anything in that encourage by me... I didn't mean You to lose any money. But I honestly warned You: the risk is all Yours, never invest more than You can afford to lose. If You don't learn that lesson before investing in anything You can learn it the hard way.

(And If You are wondering how I was able to withdraw anything... well I don't know perhaps they give some small amount of gold at the beginning... but more likely is the answer that the reason is I once did small replenishment by bitcoins from some faucet... that was a little and I still can withdraw small part of it(about 1$), but also part(about 1.5$ - not much but still it's better to have it than to lose it) of it is just waste, taken by this swindlers)

As an act of apology, I also promise You that I try to make at least two more articles this week - one about (this time hopefully legit) source of passive income and 1 about bitcoin.

If You like this article don’t forget to tip me!