My Summary About Origin of Biosignals
MyUplandCity Writing Contest and Giveaway - $1,500 in ETH Prizes - JOIN HERE!

My Summary About Origin of Biosignals

This is a summary about Biosignals in my Masters course of Bioinformation Engineering. If the passage is too much for you, then it is better to view the slide instead. This assignment except for the images which are from Miller Karol "Biological and medical physics, biomedical engineering" (2011), has never been published anywhere and I, as the author and copyright holder, license this assignment customized CC-BY-SA where anyone can share, copy, republish, and sell on condition to state my name as the author and notify that the original and open version available here.

From the biosignal is defined as a description of a physiological phenomena, the word “bio” and “signal” itself can mean any signals that can be found in living beings, also signal is some kind of message which contain informations. The very basic of biosignal assessment is from physiologist or us through observing the condition of the patient as on Fig. 1.1. The signals can be perceived by our senses like seeing in Fig. 1.1, touching as in Fig. 1.2, and hearing as in Fig. 1.3. 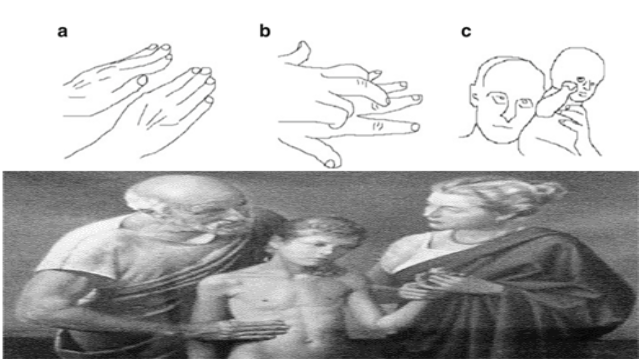 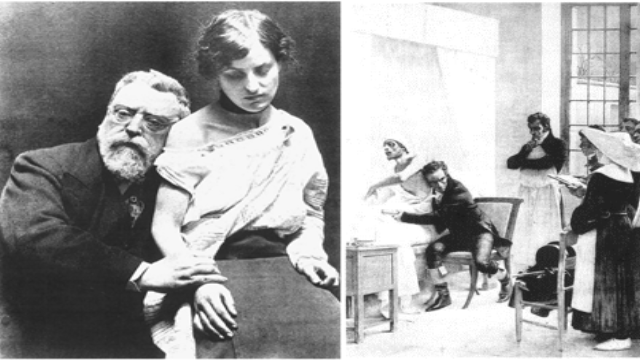 Moving on to the next topic, where does biosignals come from? Apart from looking through our eyes we can feel vibrations and hear sounds emanating from within the living body. It is said the sources are vital organs which will be discussed on chapter 2. Those sounds and vibrations will travel through the body and perceived by us. It can be illustrated in Fig. 1.4 where they transmit, propagate, and us, receive. Thus this can be mathematically modeled as a block diagram which in the book had a figure as in Fig. 1.5 where there is biosignals source, then goes through propagation, coupling, and conversion loss, finally registration of biogsignal. The figure shows high similarity of Ohm’s law where the generator is in form of voltage “U”, through propagation there is an impedance of “Z” or resistance “R” for direct current (DC) (this one is alternating current (AC)), the registration of biosignal in form of current “I”. On therapy for physiologist, they will first have to learn how biosignals from healthy living being, then tries performing sets of method on the sick patient to return the abnormal biosignals to its healthy state. The therapy model on the book of Fig. 1.6 is more like a control system trying to achieve the desired biosignal, on this case the biosignal of a healthy living being. 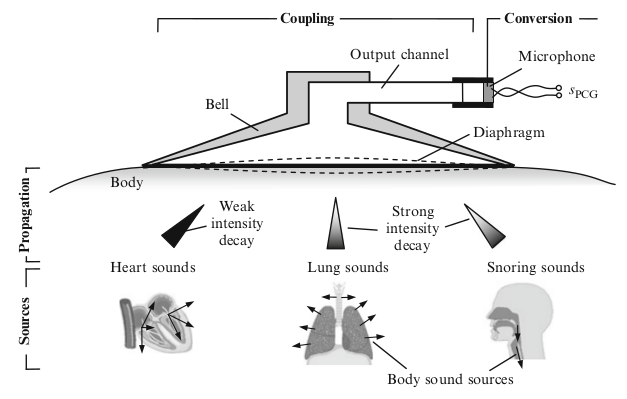 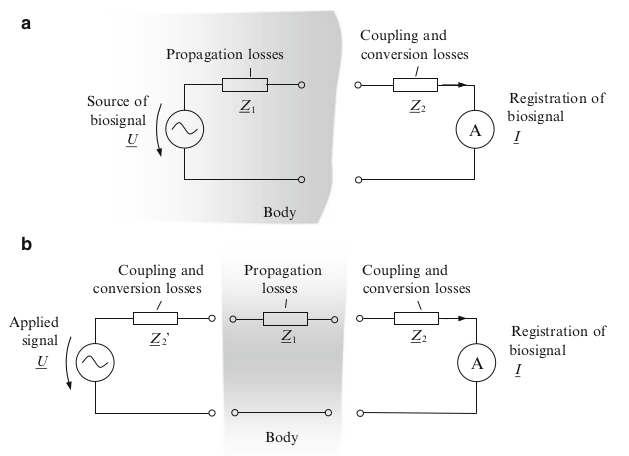 Outer parts of the body can be observed through sight, but for the inner parts sight is not common to use on the inside of the body conventionally since back then is not possible to see without disemboweling the outer parts. So vibration through touch and sound through hearing is commonly used to observe the inner part. To hear better stethoscope was invented, its ancestors is drawn on Fig. 1.7 and modern one is Fig. 1.1. However the information derived by the physician is highly subjective (different between each physicians) and a standard scale was demanded. It’s very interesting that back then they use musical nodes to document the heart beat rate on Fig. 1.8 before sphygmomanometer were discovered as on Fig. 1.9 which is its ancestor, and today the heartbeat can be drawn as form if sinusoid signals as on Fig. 1.10 which the figure also shows some other biosignals. 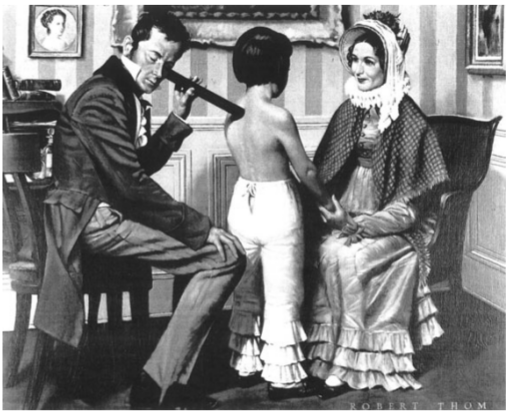 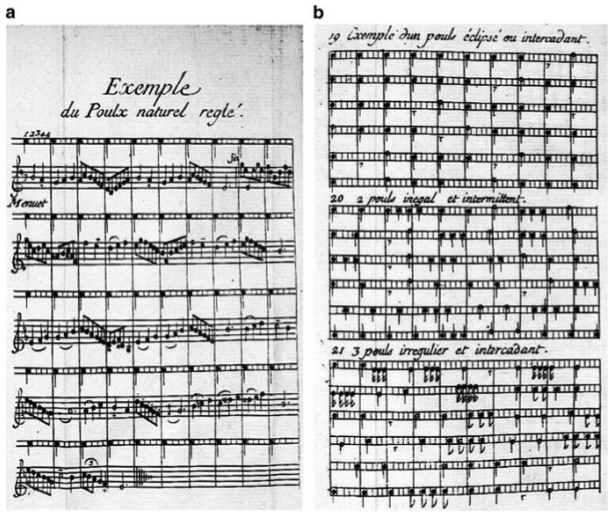 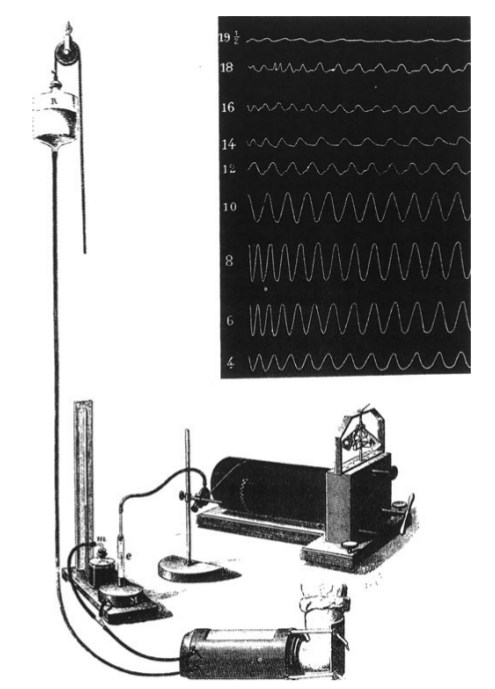 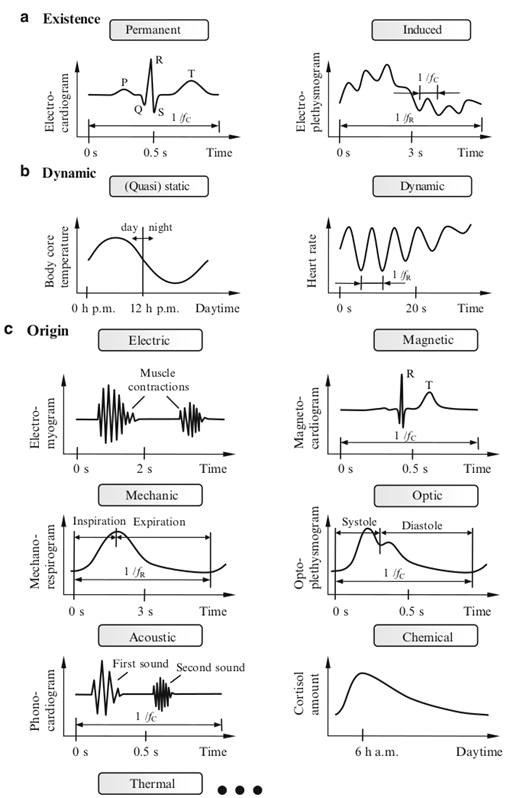 Today even more tools are demanded for biosignal monitoring as on Fig. 1.11. Base on the book previously data was only known by physicians, but today with more monitoring tools more of patient’s condition can be recorded and documented which can be used for further analysis. The future trend is to make portable wearables where the monitoring doesn’t have to be done in the clinic. Ideally the closer the data to the condition of everyday live the better since the sickness is not represented in the clinic but what happens when the patients do their activities in their respective environment. Research sensor node commonly in how much data that could be retrieved, battery live, and patients’ comfort where wireless is more preferred than wire for example. 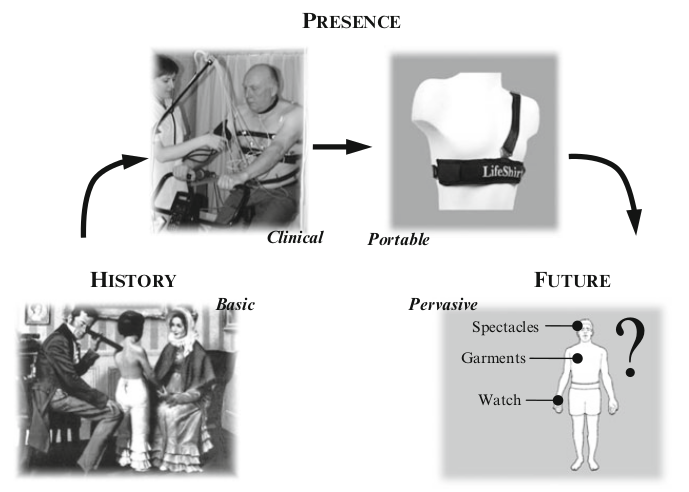 In the previous chapter was explained that biosignals from inside of our body, propagates through the skin, and perceived by us with the help of stethoscope. Inside of our bodies can be found different organs with brain, heart, kidneys, liver, and lungs as the major. Each organs have their own functionality and thus may produce different kind of biosignals. However the origin of biosignals is hypothesized to come from even deeper that made up of these organs which are called cells. Thus this summary will only include how cell is related to biosignals.

Cell is the smallest unit of life which forms the basics of functions and structures in living things, also represents the origin of any biosignals. There is a basic structure of cells that consists of outer cell, cell contents, and its specialized units, which on Fig. 2.1 shows a illustration of it, but not all cells have the same structure, however shares similarities. The biosignal itself some may call it bioelectricity which is electricity emitted by cells. How does cells produce electricity? In simple term it is created from the potential difference between cells, and/or potential difference between intracellular (inside the cell) and extracellular (outside the cell). When the cells of living things are stimulated, sodium (Na+) and Potassium (K+) ions move rapidly through the cell membrane’s ion channel, creating a difference in electric potential. Sodium can be found outside the cell in form of NaCl (salt) while potassium can be found inside the cell. This also shows that cloride (Cl-) ion can also generate potential difference when flowing. Knowing this the number of nutrients the cells receive affects biosignal generated, with advance knowledge one can determine the condition of a person through biosignal alone. 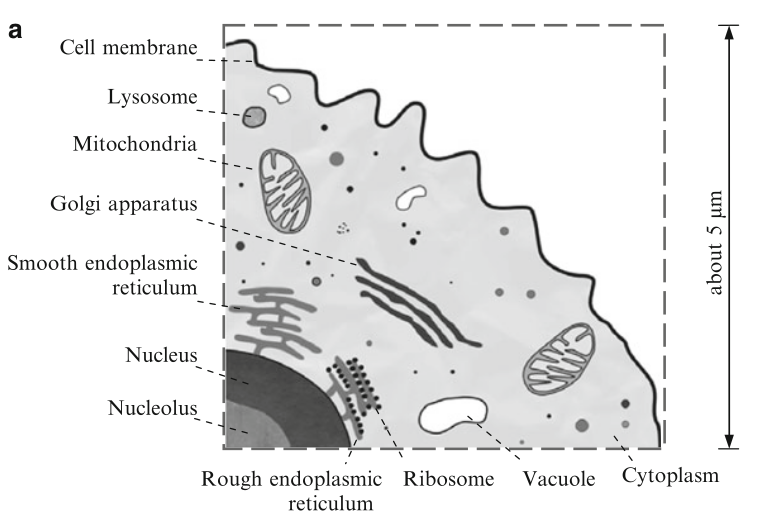 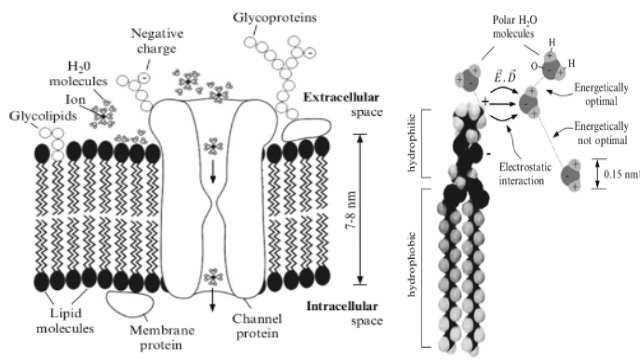 In the previous paragraph it is said that sodium and potassium flows in and out through the membrane channel which in the book showed that the cell membrane played the most important part in generating biosignal or bioelectricity. The membrane isolates the inner of the cell from the outer and controls interaction between cells which attached to similar ones and repels others, also controls interaction with other substances. Fig. 2.2 showed the ion channel controls what is coming in and out, looking at the image the channel is a protein that lines up with lipid molecules with more details on the right image. First the lipid molecules has a hydrophobic (repels water) side and hydrophilic side. They are formed from attraction of molecules between positive and negative charge. Though water (H2O) is an ionic bond that have equal positive and negative charge but the negative part will be attracted to the positive part of the lipid and so on. Second the channel is a protein which is too much of a topic to discuss here, however the protein have five main function in cells which is (1) as a channel, (2) as transporters, (3) as enzymes, (4) as receptors (only channel receptor is dicussed (1) and (2)), and (5) as structural proteins (not discussed). 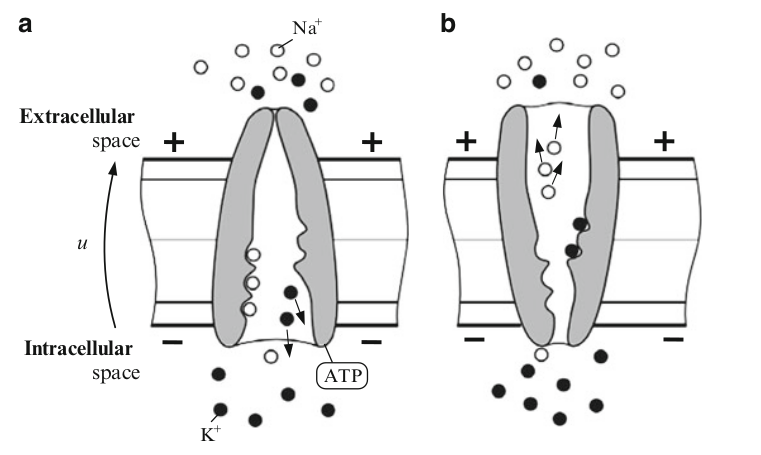 The flow of ions is not only due to difference in concentration but also to chemical bonding. For example the Potassium (K+) is positively charge and outside the cell there is a chloride (Cl-) negatively charge. It can be said that the negatively charge chloride (Cl-) is pulling the Potassium (K+), and this is one of the place that enzymes come into play. The enzymes are more of a helper and accelerator to speed up the chemical bonding mostly in figure aspect as on Fig 2.4 like a key and lock process.

Going back to the Fig 2.2 it showed a membrane that has one passive channel, while in actual it can have more active and passive channel, also another channel which will be discussed. But before that, with just the active and passive channel the cell is in a resting state (resting potential) where the flow of ions in and out of the passive channel is stable. Potassium (K+) going out, then going back in because the cell became negatively charged due to lack of positive ions, then going out again due to difference in concentration. When equilibrium is reached the active channel creates a difference in concentration again and everything will restart. This stable state or resting potential calculated on squid axon is about -50mV. 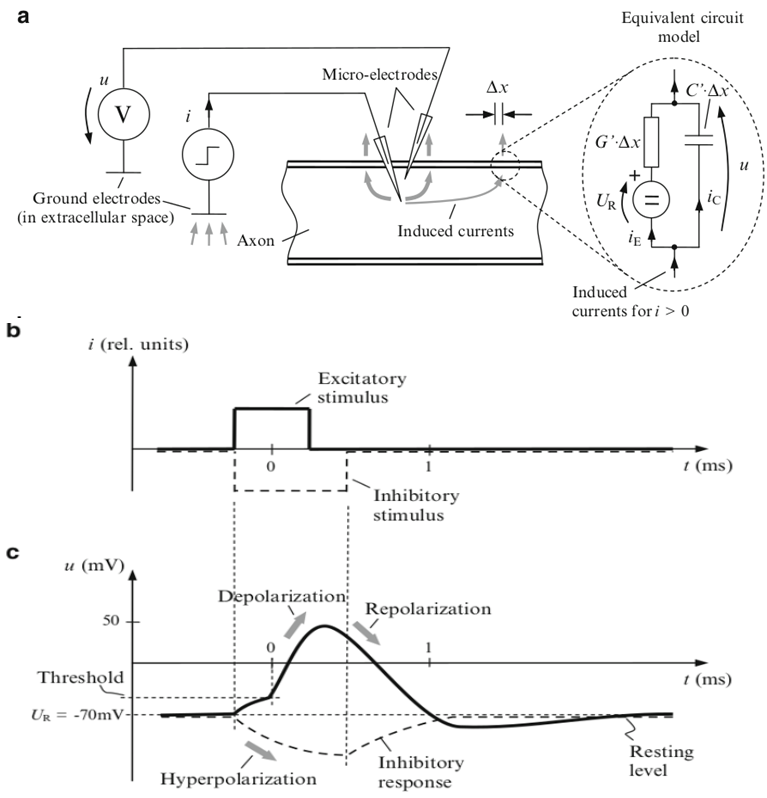 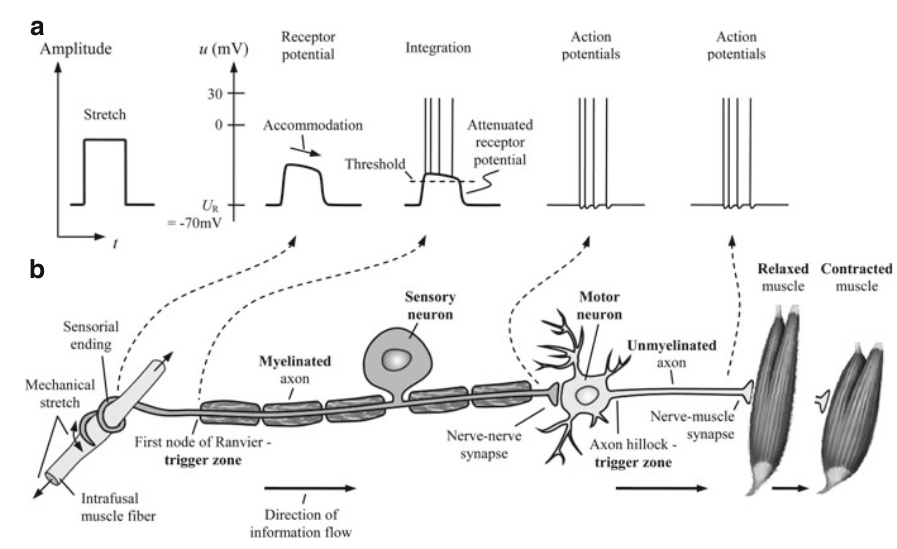 Fig. 2.6 How the body stimulates the muscle. https://upload.wikimedia.org/wikipedia/commons/2/2f/Action_potential_propagation_animation.gif 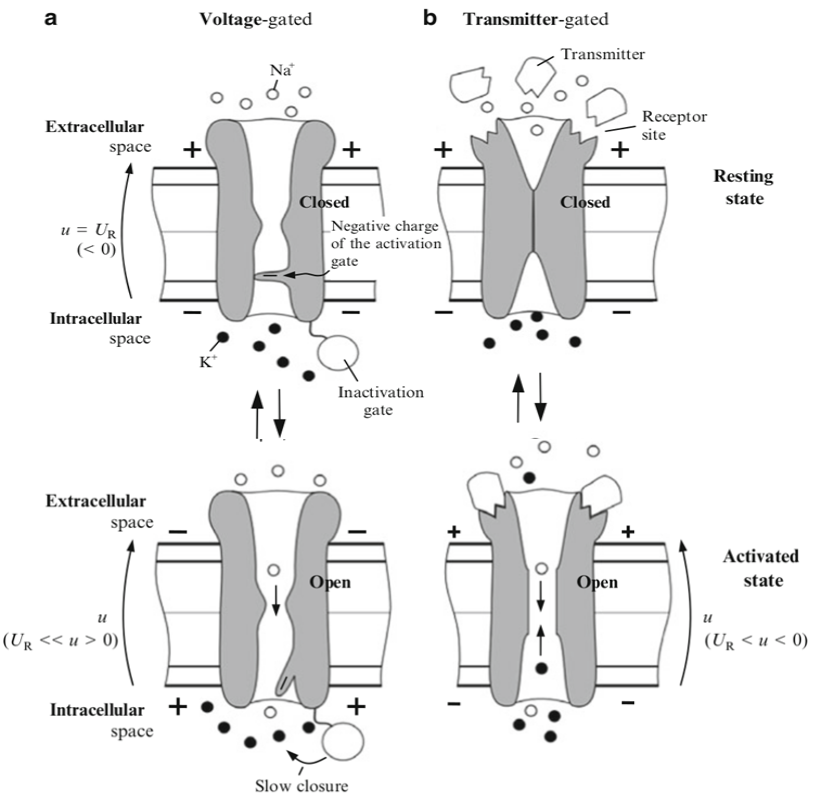 The other potential other than the resting potential is the action potential. It is state when the cell flows a large portion of ion generating more potential difference, meaning much more bioelectricity or biosignals. This action potential is triggered when the cell is stimulated, Fig 2.5 shows a model of the axon cell being artificially stimulated, while Fig 2.6 shows how our body really works where the stimulation is sent from our brain, through the neuron, then contracting the muscles. The channel that is responsible for action potential is called gated channel. People studying electronics should see similarity with gated transistors, when a certain voltage is applied to the gate, the flow opens and amplifying the current. Surprisingly the gated channel works in similar way, or maybe the other way around that transistor was modeled after this. On Fig 2.7 the gated channel can either be voltage-gated or transmitter-gated. For voltage-gated like transistor can be stimulated by applying voltage around -55mV (in squid) while the transmitter-gated relies on a substance like a key that activates the channel. On Fig 2.6 the neurons applies voltage and releases these substances. After the action potential state it will return to resting potential state. With more examination the resting and action potential can be modeled into form of electric circuit as on Fig 2.8. 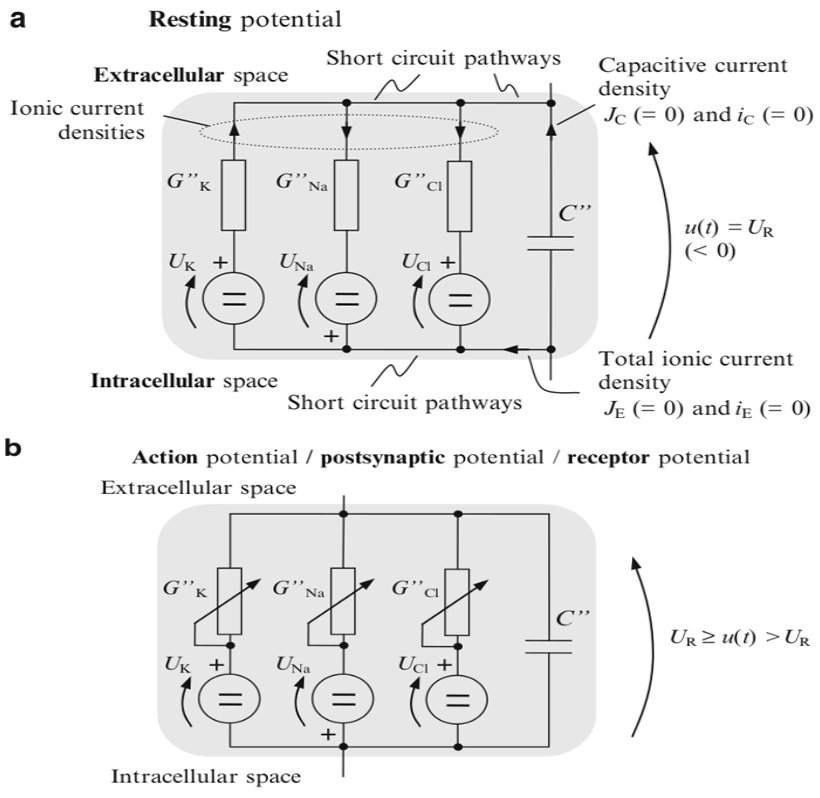 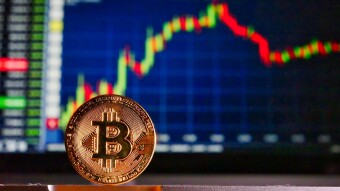