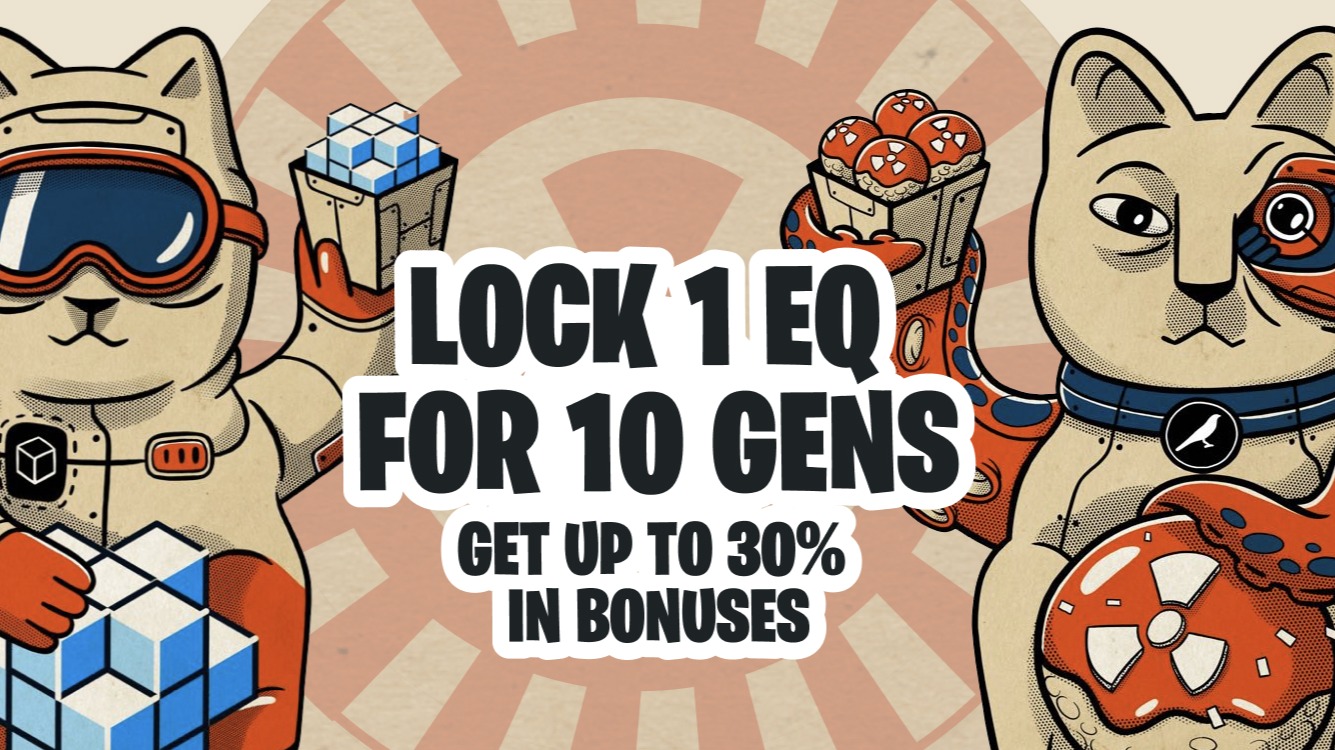 We will hold a lockdrop on Kusama to kick off user activity on our Genshiro DeFi parachain.Starting on May 27, all existing EQ token holders are eligible to participate by locking their EQ stakes in a dedicated vault on Equilibrium’s Polkadot substrate. The lockdrop will incentivize participation on the network as a new method for distributing tokens without actually raising money.

Those who participate in our Kusama lockdrop will receive GENS, Genshiro’s utility token. GENS will play a key role in the Genshiro network and the DeFi products built on top of it.

GENS holders can express their opinions about the state of the system and enforce governance decisions via referendums. Network validators get GENS token for running blockchain nodes and performing parallel work. Users pay transaction fees in GENS, borrowers pay interest fees in GENS, and it can even be used as bailout and collateral liquidity in Kusama liquidity pools once the tokens achieve sustainable value.

There will be 10 GENS for every EQ token. Given the total EQ supply of 120 million, there will be 1.2 billion GENS. We expect the GENS distribution on Kusama will break down according to the chart below. 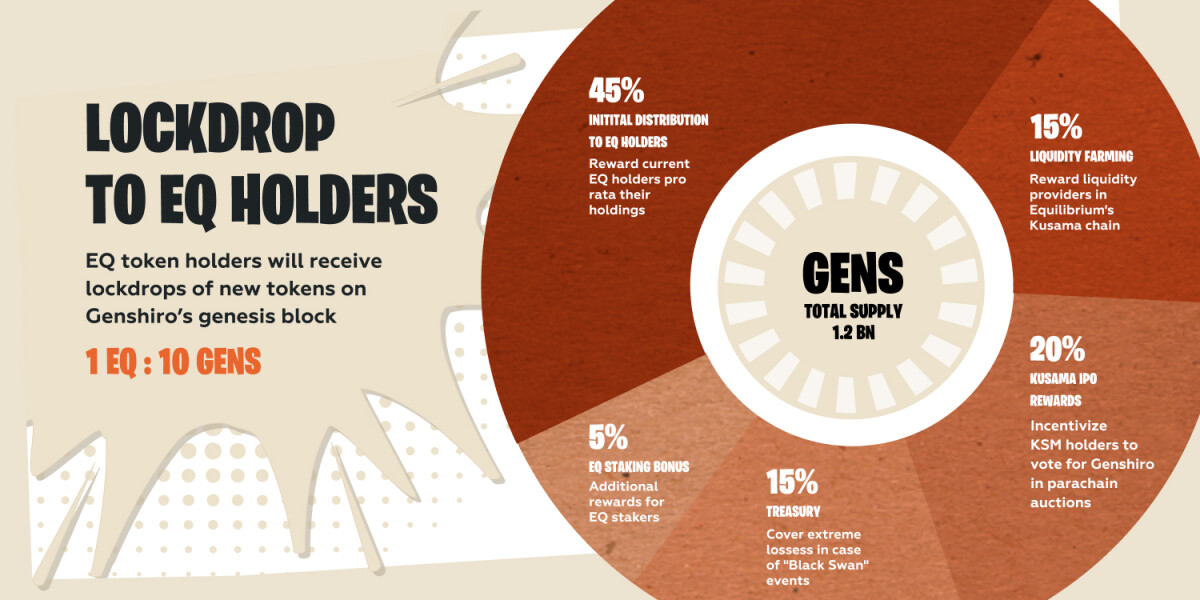 As you can see, there is a significant allocation (45%) for the initial distribution to EQ token holders. Let’s dive into how this distribution will work.

Users who want to participate in our Genshiro lockdrop need to lock their vested/circulating EQ tokens to receive an allocation of GENS on Kusama.

If users have unvested/yet-to-be distributed EQ tokens, they will also receive GENS for these tokens as well. The size of the respective allocation depends on the fraction of already vested EQ tokens locked by these users. The more EQ tokens users lock, the more GENS tokens they will get for unvested EQ in Genshiro. But this proportion is not linear: the GENS allocation for unvested EQ diminishes exponentially as the portion of locked EQ decreases.

Up to 30% bonus for early participation

You can also benefit from the lockdrop by locking EQ tokens inside Equilibrium earlier.(You can join our early subscription list and earn an additional bonus of 1%).

The maximum bonus is 30% at the beginning of the lockdrop, which will decline to zero over the course of one month after the lockdrop opens. Here you can see the curve for the bonus: 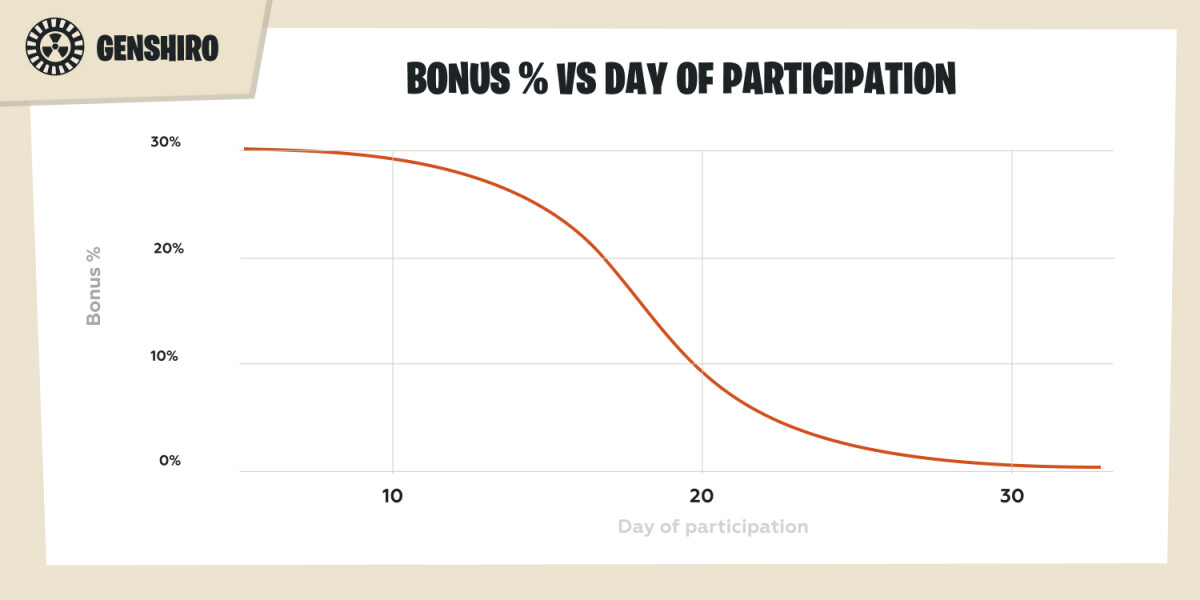 Instead of receiving the tokens at your Genshiro address, you receive the allocation locked in a dedicated vault. You can claim GENS from this vault whenever you want, but a penalty on withdrawal may apply if you do it early.

This penalty starts at 50%, then it declines to zero over the course of three months. After 90 days, you can withdraw without penalty. To make this mechanism more interesting and give it a touch of game theory, other participants will share the penalties incurred by those who exit early. Staying in the pool until the end becomes the optimal strategy for individual users.

We are well on our way to unlocking the full potential of the DeFi market, and we’re excited to greet the Kusama community with a spirit of positive experimentation.

You can learn more about GENS tokenomy here.