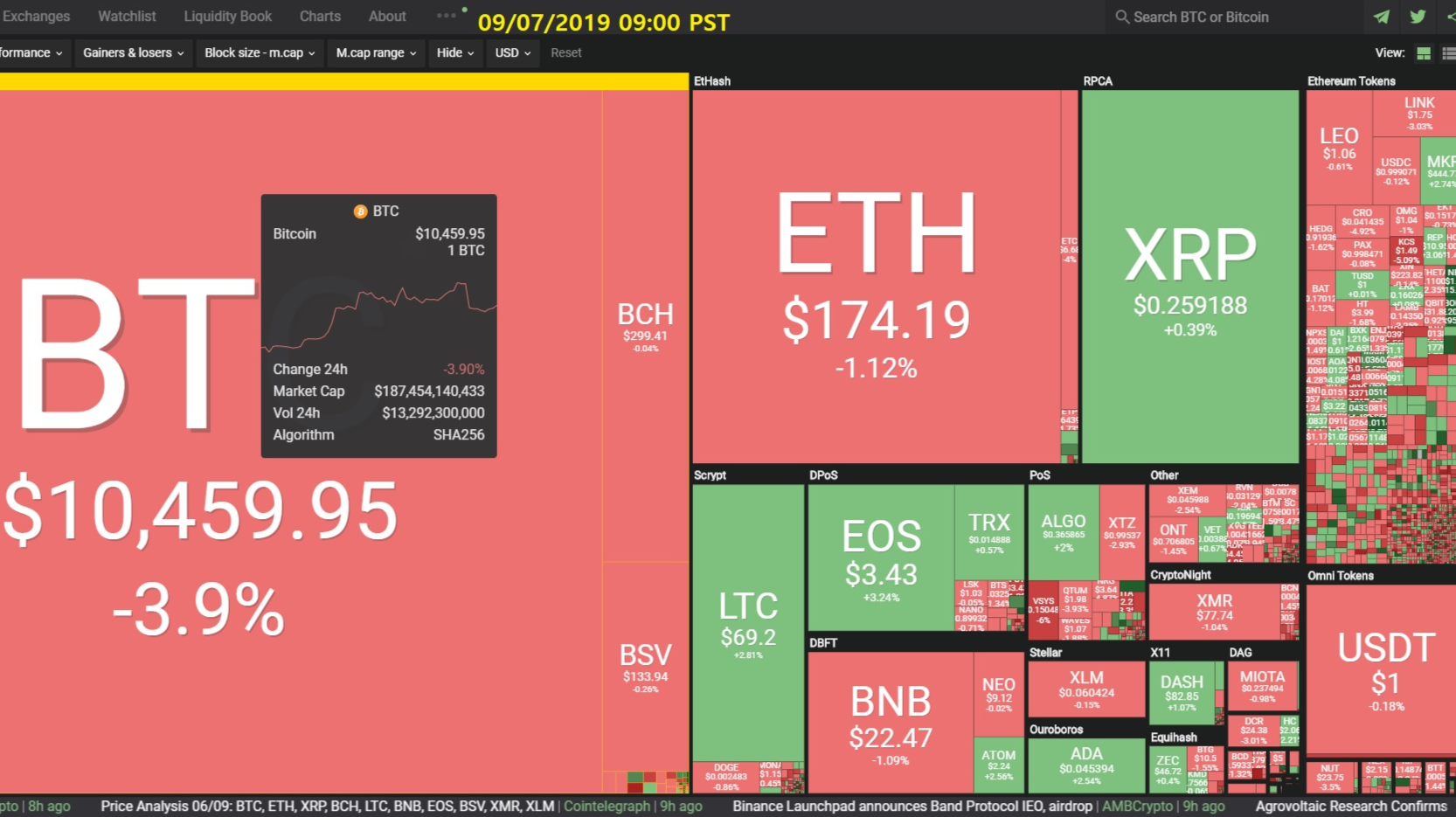 BTC/USD chart. Source: Tradingview
The views and opinions expressed here are solely those of the author and do not necessarily reflect the views of Cointelegraph. Every investment and trading move involves risk. You should conduct your own research when making a decision.

Bakkt Warehouse custody opened yesterday, as clients were able to deposit Bitcoin funds into the accounts. However, minutes after the tweet announcing the opening, the price of Bitcoin dropped by $700 — a classic example of buying the rumor, selling the news.

Let’s take a look at the charts to see where the market is standing.

The S&P 500 (SPX) is just three months away from closing the book on an incredible decade. While the index has made gains over the last few days, it appears that we are witnessing the beginning of the end.

Even investors are starting to feel jittery.

A look at the Fear and Greed Index provided by CNN shows that fear is driving the market right now. Also, a closer look at the S&P 500 index reveals that greed levels have been gradually dropping while fear levels are making new lows in the last two years.

With Bitcoin On-Chain Volume Looking “Very Bearish,” How Can We Be In A Bull Season? [bitcoinexchangeguide.com]

Bitcoin Price Rises as China and US Back on Trade War Track: Bloomberg [u.today]

As the US and China are getting back to the trade war track, the yuan rate is plunging, making Bitcoin price go up again.

After Bitcoin had dropped below the $10,000 level recently and had stayed there for a while, the other day BTC got back above the crucial $10,000 mark. At press time, BTC is exchanging hands at $10.389.

The new NYDFS-regulated PAX Gold (PAXG) is for investors who trust in gold and have no interest in dropping it. PAX Gold, a digital token on the Ethereum blockchain, is the actual legal title to a bar of gold stored in the Brink’s London vault. By combining the portability of digital assets with the traditional benefits of physical gold, it aims to bridge the two and end the battle over which one is better: gold or crypto.

Bitcoin Price Rejected Near $11,000; Is a Deeper Correction Coming? [hacked.com]

Bitcoin (BTC/USD) tumbles from more than two-week highs after being rejected at $10,800. | Source: TradingView.

Bitcoin’s price swung lower on Saturday after facing a firm rejection at $10,900, its highest level in over two weeks. The largest digital currency is still up more than $1,000 from last week’s low, raising cautious optimism that the worst of the downtrend had passed.

Ethereum: Is the World’s Second Most Popular Cryptocurrency Dying a Slow Death? [coingape.com]

Ethereum, the world’s second most cryptocurrency after Bitcoin, is gradually losing its foothold in the market. Its market capitalization has almost halved since the end of June, and it is trading at just a fraction of its all-time high. Are all the crypto-flippening enthusiasts going to be proven wrong as Ethereum dies a slow death?

Bitcoin (BTC) has been on an absolute tear in 2019 so far. The cryptocurrency has gained hundreds of percent on its bottom of $3,150, as have a majority of altcoins.

However, this market’s rally might not be done yet. According to a pioneer of Bitcoin, Adam Back, BTC surging by another 400% is “not far off”. And here’s why.

The hype of ICOs in 2017 was downright crazy. Bitcoin was in a state of peak performance and hitting new highs every day, and the trend of ICOs evolved with it. Investors were making enormous returns on their investments and the huge interest ended up giving rise to scam ICOs which had zero credibility in the space. The ICO phase eventually came to an end but at press time, there was a new hype-train catching up in 2019: IEOs.

As bitcoin price remains in its range-bound channel, other indicators are slowly turning bullish for the king of crypto. BTC has held on to five figures as we begin the weekend and bigger things could be in store as open interest mounts up.

Binance is on the move as it announced its ninth project of this year. According to the announcement, Binance Launchpad, Binance’s token launch platform, will host the token sale of Band Protocol, a company that gives services of the data governance framework for Web 3.0 applications.

This token sale on Binanace launchpad will follow an updated lottery format. The ticket claim will begin on September 6, 2019, at 06:00 UTC.

Famed emerging markets investor Mark Mobius has taken the bitcoin as a ‘digital gold’ argument to the next level, claiming that the cryptocurrency should be backed by a precious metal to give it value.

In an interview with CNBC’s Squawk Box on Sept. 5, Mobius told viewers that he was concerned about the risks involved with investing in bitcoin, including the lack of physical value underlying crypto-assets.

An insider source has revealed that China’s cryptocurrency will share a lot of similarities with Facebook’s Libra. As reported by Reuters, China’s Central Bank’s senator confirmed this while stating that the digital currency, which is currently being anticipated, will provide large user accessibility through China’s largest social media application WeChat and Alipay.