Today I want to post about the Bitcoin weekly close and that we are ready to try and battle one of our biggest resistances, namely the 12K area. Furthermore I would like to point out towards the end of this post about developer activity on various platforms (Altcoins). You will see some interesting developments.

Here is a weekly chart of Bitcoin : 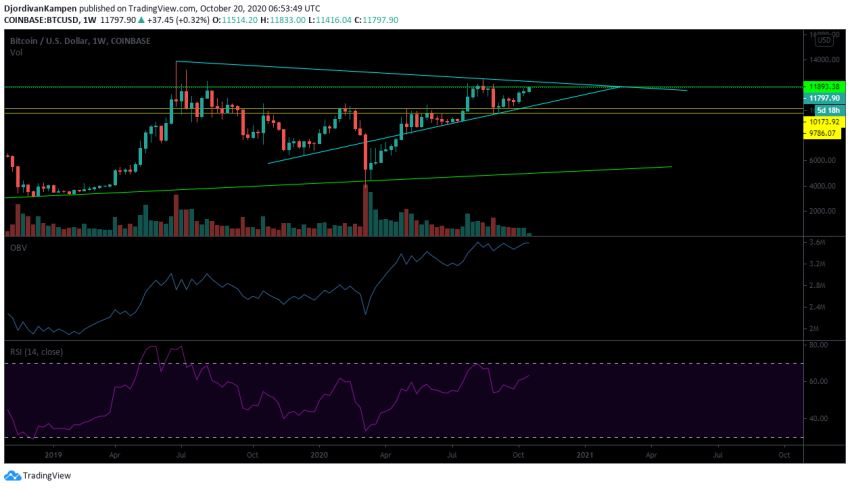 I have put the indicators OBV (On Balance Volume) and RSI (Relative Strength Index). I have also drawn an approximate channel with blue lines. This is not exact science and you can draw these lines in different ways, but I like it this way. The channel shows me that we are ready to battle once again the 12K area. This area is weirdly enough kind of large, but it shows how important this area is. I put the area around the 11.9K until 12.2K as most important, but you can put it as large as 11.8K and 12.5K. We have had a lot of weekly closes around this area as mostly resistance (look left of the chart, wicks not counted, but candle closes). In one of my other posts I have pointed out that if we had a monthly close above 10.593$ (September close), which we did, we would very likely continue higher and start to battle the 12K area in October. This is happening right now and I am happy with this, because it seems more and more likely we will break that area. The more we test it, the more likely it will become to break it !

Personally I would like to see us stay just under the 12K area for a couple of weeks, for building up momentum, before breaking it with force, but obviously that is only my wish. Bitcoin does what it does and there is a good possibility that we will break through it sooner, rather than later. Looking at the RSI we are crawling upwards and it seems a good moment to smash through the 12K area and move towards 14K and my personal opinion, towards 16/17K, before topping out and having a good overbought area on the RSI. This will lead to a consolidation period (decline easily possible towards 14K and maybe even as far as 12K/12.5K). This consolidation can easily be a month or two.

Looking at the blue channel, you can see it will soon be at its end. Right now we are getting very close to the top of the channel once again, which is a good sign.
OBV is looking great, like it often does with Bitcoin and that is also a good sign for moving forwards.

Anyway the weekly chart is looking positive and hopefully Bitcoin can confirm this by battling the 12K area fiercely and hopefully break it once and for all ! If we were to lose that battle again, BTC could move towards the support of the blue line again and hopefully that can hold. It would be around the 10.4K area and this crawls up every week. Preferably I would like to see us stay above the 11K level. This is psychological and would mean that we have overcome the 10K levels ! 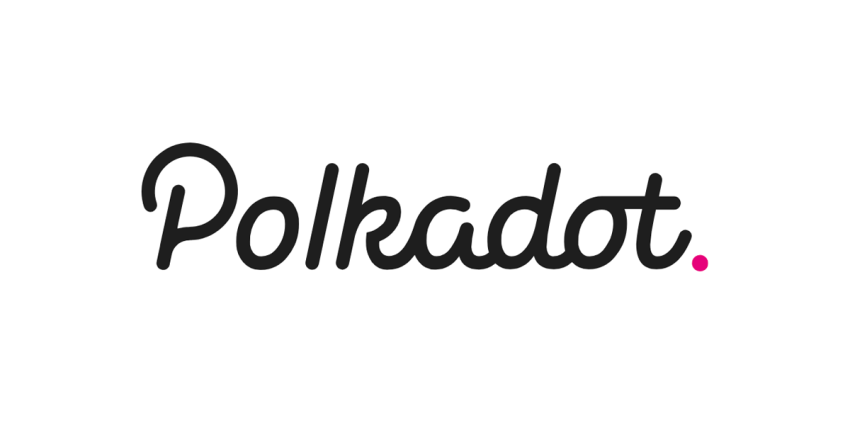 In the news article on medium.com (see footnote), you can read about developer activity on various platforms. It is very interesting to see that Polkadot is rising rapidly in activity (40% rise), while its price is rather consolidating and not really moving upwards. Does this mean we see hidden accumulation on this Altcoin ? I am trying to buy in little amounts of Polkadot every now and then.
Furthermore the article points out that we see a decline in the following platforms (monthly activity) :

- Ethereum, a little less than minus 20% developer activity

- Bitcoin, a little less than minus 20% developer activity

These figures do not necessarily mean that it is all bad, when there is a decline of developer activity. Ethereum for example is planning on launching ETH 2.0 which is huge, however there monthly activity went down with around 20%. It maybe means that all of the hard work is done for it and right now we see a decline in activity before the real launch. Bitcoin has a decline as well of more or less 20%. When we look at Bitcoin Cash and EOS, there figures are quite higher and hopefully it does not mean that developers are giving up on their platforms. It is a good thing to keep on monitoring this and see if these declines continue in the upcoming months.

Bitcoin is starting to battle the 12K area once again and this is a good sign ! Hopefully we can break it this time and the OBV and the RSI are supporting this. The more you test an area, the more likely it is to break it. Breaking 12K gives a good possibility of jumping towards at least the 14K area, but likely as well as high as 16/17K. Failing to break the 12K level would likely mean a break towards 10.4/10.5K, but hopefully we can stay above the 11K level (psychologically we would finally stay above the 10K levels).
In terms of developers activity we see a good rise on the Polkadot platform. Furthermore there is a noticeable decline on the EOS platform and the Bitcoin Cash platform. Even Ethereum and Bitcoin see declines in their monthly activity, but for these two cryptocurrencies the decline is less noticeable, than on the EOS and Bitcoin Cash platform. 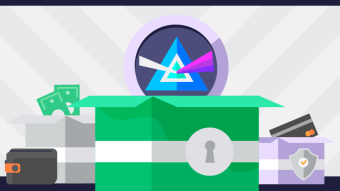 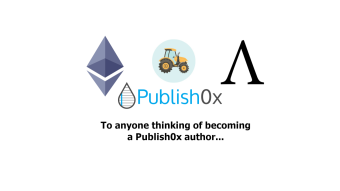 To anyone thinking of being a Publish0x author - this is for you!