21 weekly EMA (Exponential Moving Average) is extremely important during the Bitcoin (BTC) bull run and can be used to buy-in during a pullback !

Today I want to talk about the 21 weekly Exponential Moving Average (from now on EMA) and how important it has been for Bitcoin’s last bull run in 2016/2017 and how it will most likely again play an important role for the upcoming big bull run. History does not repeat itself, but it often rhymes is a saying. For BTC it is definitely the case. I am going to show you how important this EMA was in 2017 with some charts.

Here is a weekly chart of BTC : 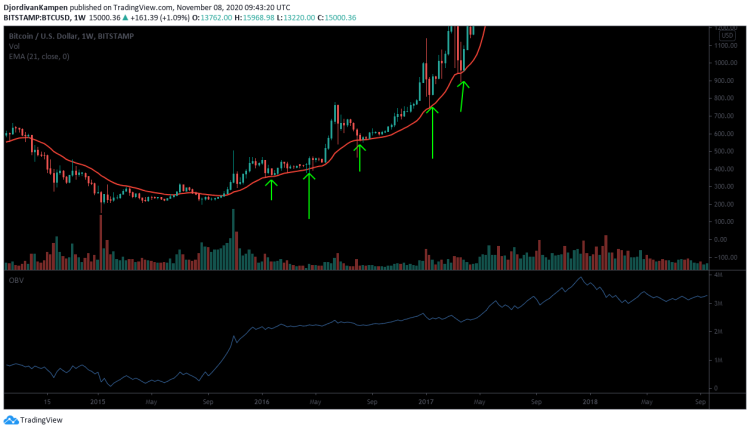 This chart shows the start of the bull run in 2016/2017. The red line is the 21 EMA. You can see in 2015 that we were under this line, which is basically a bear market. In July 2015 we broke above this line for the first line, but we broke back under it. Finally in mid-October 2015 we broke back above it and it was the real start of the bull market for 2016/2017. The indicator OBV (On Balance Volume) confirmed this by the way with a spike upwards ! The 21 EMA on the weekly chart gets discussed by some Youtube channels, like MMcrypto and Crypto Crew University and thanks to them I started following this EMA and it is powerful !

After the start we can see with the green arrows how price often wants to meet/test the 21 EMA during a strong pullback. Sometimes with wicks, sometimes with body candles. The importance is that the candle closes above or on the red line and this is the case. We have had wicks under this EMA, but the body closes above or on it.

This is chart number two which will show two more big pullbacks towards the 21 EMA in 2017 : 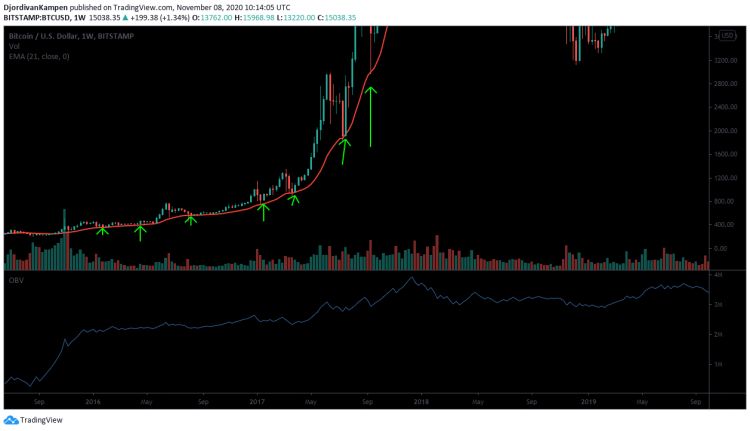 These were the last two before the end of the bull run. You can see during this last bull run that the 21 weekly EMA was a sure bet to buy-in if you were trading long-positions, or if you were holding for a longer period before selling.

Here is another chart which will show the bear market and once again the beginning of this new bull market : 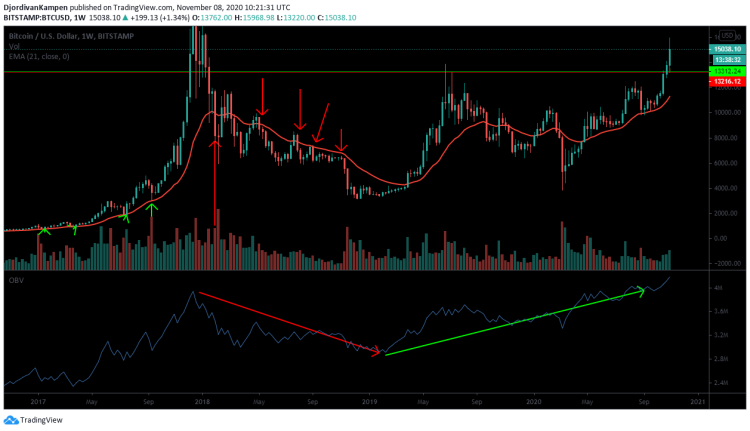 You can see the color red which shows bear market conditions. You can see we fell under the 21 EMA around the end of January 2018 and since then we have battled it several times during the bear market. We actually went above it several times, but we never managed to convincingly break it, thus moving back down under it. Look at the volume and at the OBV as well ! Volume declined during the period where we tried to climb back above it and OBV was going lower as well. All signs that we were not going to make it. After the beginning of September 2018 and especially October 2018, we did not even manage anymore to hit the 21 EMA (weakness), so a big decline was coming up. This turned out to be the bottom at 3200$. Look once again at the volume and OBV and the first of April 2019 in the price chart. You will see volume rising during the dump to 3200$ and during the 1st of April green candle which jumps above the 21 EMA. OBV is starting to rise as well which is indicative to a change of the trend.

This is the last chart I will show you : 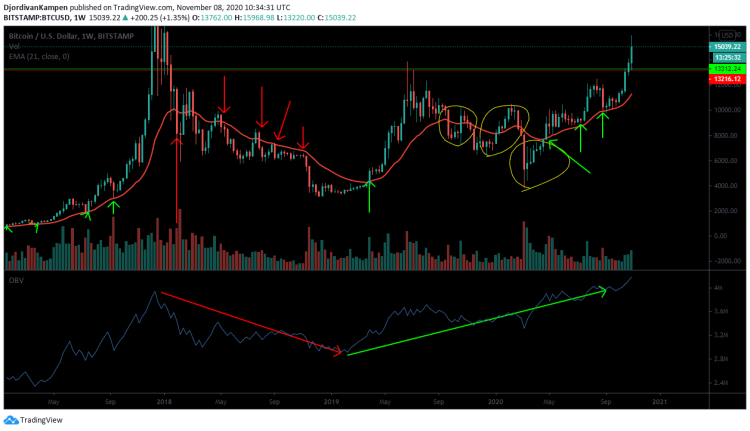 The yellow circles were interesting areas, because they did not behave the same as in 2015. History does not repeat itself, but it often rhymes. We see several tries to go above and stay above, but we fail. In 2015 we had one try that failed as well, before the second one succeeded. In 2019 we see three tries and they fail. The COVID-19 crash gave the biggest volume and most likely indicated a real end to the bear market. Ever since we see a break of the 21 EMA on the 27th of April 2020, we have seen so far two tests of the 21 EMA as support (last two green arrows). They held both and it seems to be working again !

After the big rise towards 16K I am watching the 21 EMA once again and it rises every week a little bit upwards as long as we stay above it. I will definitely be adding to my BTC holdings if it is going to hit this moving average again. Personally I am looking at some important weekly levels like 13800/13900$ area and the 11800/12200$ area. The 21 EMA is right now at 11707$ so it is getting very close to the 11800/12200$ area ! It seems good confluence to me, especially since we are overbought on the CCI indicator (Commodity Channel Index) and the RSI (Relative Strength Index) on the weekly chart. Furthermore we have the fear and greed index at 90 which is extreme greed and funding rates on exchanges are positive, which means more longs than shorts, which in general will lead to a dump at some point. During the run up, we did not see a big change of behavior in terms of funding rates, but right now, with the 16K we do see a change. This change often happen during tops getting created. Thus we might well have created a short-term top at 16K. This could lead to several weeks of cooling down, finding support, resetting indicators and funding rate and move further up again.

I for one will be happy to see some cooling down and some opportunities to buy a little bit again. It is good for indicators to cool down and reset so that we can get our next move up again !