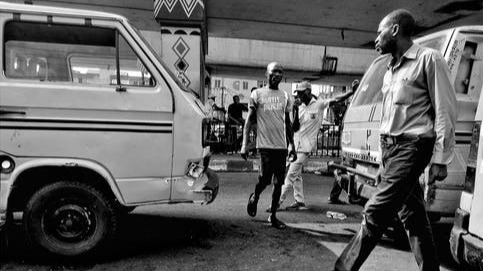 I am at this place, the shopping mall popularly called Shoprite in Ikeja, Lagos. I am at the KFC eatery waiting for a friend. People walking pass, minding their business, just as I am minding mine. I start to observe a pattern. I take out my blackberry device and start to type. I can sit here and write a book about this city and its people. The city of excellence and people of dreams.

Cars parked, neatly arranged, everything seems to obey order here; a typical example of how environment conditions man. This particular environment demands decorum from these people. They pay wholly, not because they are willing, but because this environment has subdued them.

It's an open city. Hierarchy is by how much money you have at the moment, potential is meaningless. They come here to reduce their accumulations. This place doesn't care; it sucks as much as it can from you, regardless of your earning power, regardless of your willingness to spend. Some are brought here to be spent on; some come here to spend, sometimes until they are spent. I like this place.

There's a certain consciousness that befalls anyone as soon as you step in through the gate. No, it's not a desire to stand out, rather it's a desire not to fall, not fall as in hit the ground, but not to "fall one's hand". I think I am infected too, may be not consumed, but I feel it slightly. I can still stare at people boldly, hold their gaze and cause their eyes to drop. It's intentional.

A certain philosopher was of the opinion that man is born free, but he is everywhere in chains. Another believed that as humans we find ourselves living a savage impossible life; a life where we are not educated nor protected by the state. That human nature is bad: we’ll prey on one another in the most vicious ways.

Observing these people, I wonder how much of their characterisation is as a result of the kind of environment they find themselves in. I am pushed further to wonder if man shapes the environment or if it is the other way round. If I consider this place to be a microcosm of the larger community, then it at first appears to be that the environment shapes man, but understanding that this place is an actual creation of man himself, then it is safe to say that the environment is shaped by man to shape man.

This is Lagos, where anything can make you or break you; as in, exalt you or extinguish you. This city, brimming with ordinary people with unlimited wants; where you have to do your own growing up, no matter how tall your grandfather was. This city, overtaken and run by the young and vibrant; age has no hold here. We are all too young to realise that certain things are impossible; which is why we would do them anyway – which is why we conquer.

This realisation is what distinguishes those who win from those who wail in this city. To crossover one only need realise that regardless of whatever conditions this city may subject you to, your heart is free and you must have the courage to follow it.

I am a Lagos Writer, and the life of a writer here is not easy, but sometimes everything lines up, the world is in-sync, and for one perfect moment, you feel totally alive. I am alive in this open city.

"fall one's hand" = Not to embarrass oneself.

There is a lot untold about the African continent. Learn more about Africa and its positive changing realities here on Discover Africa.