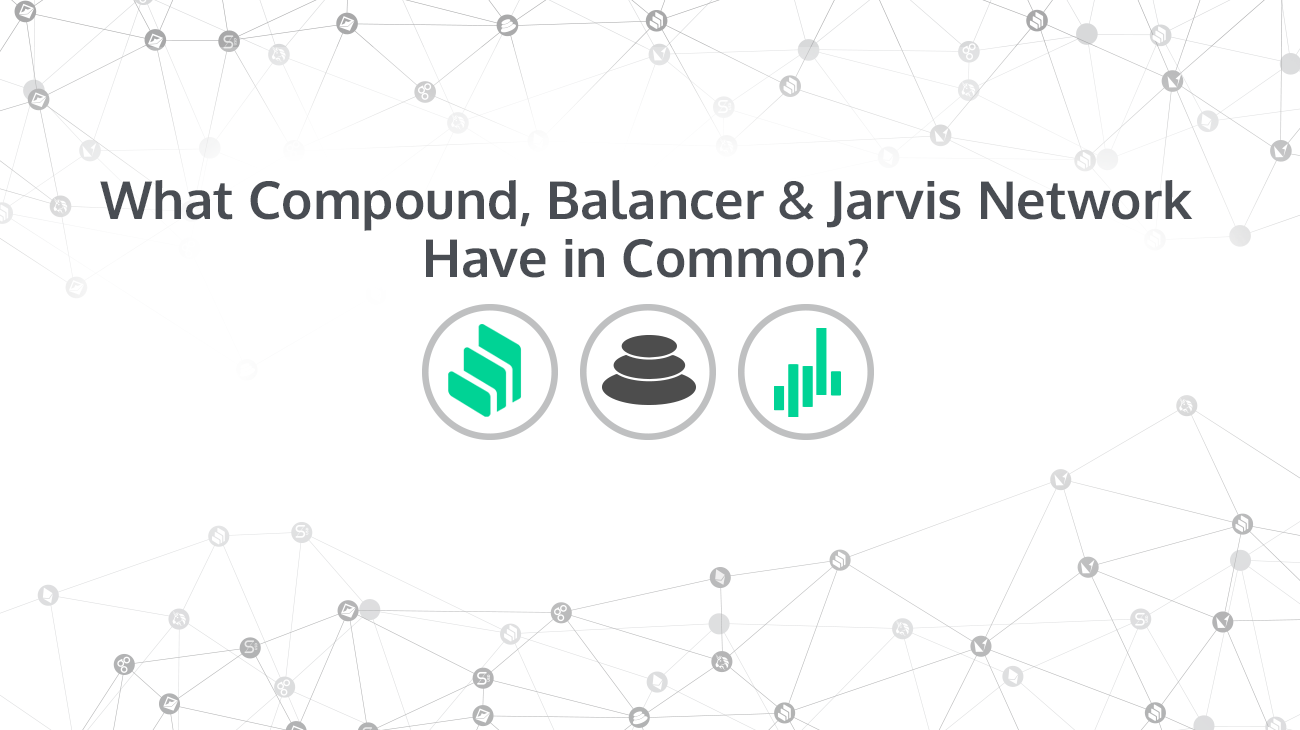 What Compound, Balancer & Jarvis Network Have in Common?

Everyone has started talking about DeFi all of a sudden - but why?

What’s going on to cause such a spontaneous buzz?

The real boom has started on June 16th, 2020, when the DeFi lending platform, Compound, released its own $COMP token that landed amongst the top 25 ranked cryptocurrency projects on CoinMarketCap in no time. 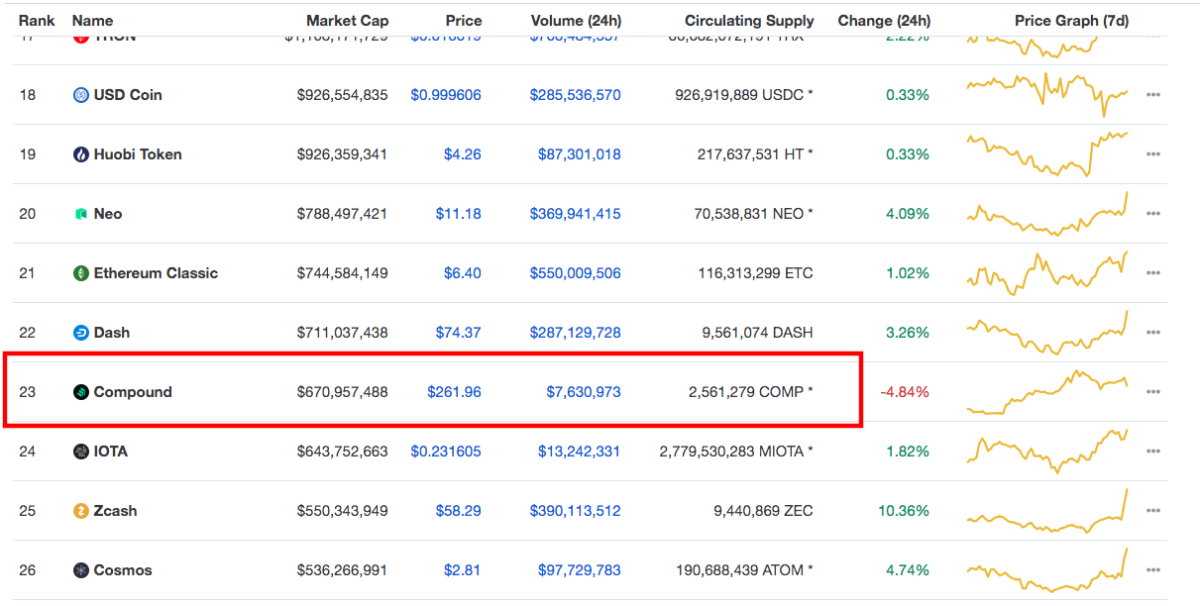 Before cryptocurrency came along all money was centralized as the central banks in different countries would print and distribute their currency accordingly. When Satoshi released Bitcoin in 2009 he started an era in which decentralized money was usable amongst the majority of the population with an internet connection.

Since its inception, Bitcoin and other cryptocurrencies have grown into an entirely new monster that holds almost $300 billion in a combined market cap value.

However, one of the biggest problems that we have with this decentralized money today is the fact that we still continue to trade them on centralized exchanges.

You can see how this might start to be a little contradictory to the nature of the decentralized currency.

In addition to this, there is a long history of large-scale centralized exchange hacks that have devastated the cryptocurrency community time and time again.

Well, Ethereum has a solution for this conundrum as it allows developers to create decentralized financial applications (dApps) to do things with cryptocurrency that aren’t even possible with fiat.

One of these features that DeFi dapps on Ethereum can provide includes the ability to be able to trade cryptocurrency in a decentralized manner without the need for going through a 3rd party centralized cryptocurrency exchange. This means that you can conduct trades on-chain without giving up custody of your tokens along the way.

However, one of the biggest obstacles stopping these DeFi applications such as Decentralized Exchanges from flourishing is the lack of liquidity within the market.

In the simplest sense, liquidity is the measure of how quickly you can sell your assets to get back into cash.

It is a combination of all of the market orders within any asset to provide liquidity for the market. A market that has a low level of liquidity would generally mean that it would be difficult to sell your assets for cash at the price that you want to sell it at.

You can see how a low level of liquidity might be a serious problem for investors.

However, DeFi should be able to change this problem of low liquidity with DeFi markets.

DeFi being a totally new space for all sorts of value suffers from the lack of liquidity that prevents big investors to move their money into this sector.

Now, there are platforms like Compound, Balancer, and the Jarvis Network that are DeFi platforms to offer tools for the regular crypto guys (like you and me) to be able to provide liquidity for different markets within the DeFi industry.

These 3 act as a bridge to funnel money from centralized finance over to decentralized one and you can become a shareholder of such a bridge today.

This gives us a fantastic opportunity as it allows us to provide liquidity to different markets and earn fees from being a liquidity provider. Typically, this type of service in the traditional financial world is strictly only reserved for the big players within the market and the regular retail traders and investors would never be able to provide liquidity.

With everything that provides money-making opportunities - there is always a catch!

In this case, it is known as “Impermanent Loss”

Impermanent Loss is the process in which users that provide liquidity to DeFi Automated Market Maker (AMM) platforms can see their staked tokens lose value compared to just simply holding them.

This means that users would be making more money by just holding the tokens in their own wallet rather than providing liquidity.

It can be considered as the difference in profit between holding your coins in your own wallet and providing them out as liquidity.

The problem of impermanent loss prevents many DeFi enthusiasts from providing liquidity in any way considering the fact that they are likely to make more money by simply holding their tokens.

Impermanent Loss occurs when the price of tokens inside the staking liquidity provider diverges in any direction. It is referred to as “Impermanent” so long as the price of the token returns to the original price before it was lent out then the loss has disappeared and 100% of the trading fees are earned.

However, in reality, this is rarely the case. The losses do actually end up becoming permanent as arbitrageurs come in and take advantage of the price differential between AMMs and external markets. Even any small price movements would provide a significant opportunity for an arbitrager to take advantage of.

Any profit that the arbitrager makes is considered a loss for the liquidity provider.

So, what Compound, Balancer & Jarvis Network Have in Common? 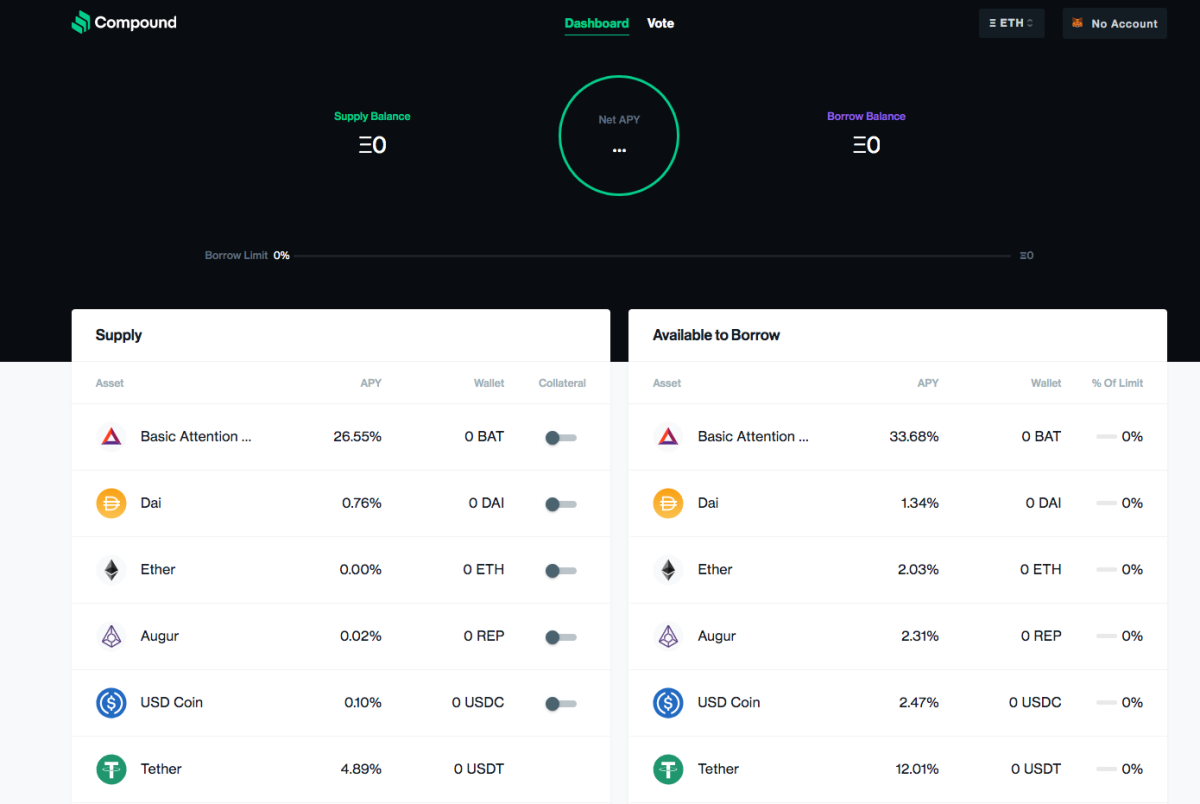 Compound Finance is an open-source DeFi protocol that allows for decentralized finance on the Ethereum blockchain. The users that supply liquidity in the form of cryptocurrency are rewarded in interest for anything that they lend to the protocol. This then allows other users to be able to come and borrow funds from the protocol directly.

It is important to point out that Compound is slightly different from balancer and Jarvis Network as it does not suffer from the problem of impermanent loss due to the fact that it has a different model in which users are simply just lending their assets to the protocol instead of staking them.

However, the thing is, in addition to Compound, there are other DeFi projects like dYdX, Dharma, bZx, and Nuo that actually offer similar interest rate returns on stablecoin assets such as DAI. This would mean that users would have no particular reason to lend on Compound as they would earn similar returns elsewhere.

It was the introduction of the $COMP token that helped to provide an extra incentive for users to choose Compound when lending their assets as they now earn the interest fee as well as the valuable $COMP token that is being distributed.

Balancer is a noncustodial automated portfolio manager in which users are able to come and provide liquidity to earn from the trading fees on that liquidity pool.

The project was just launched in March 2020 and it is made up of a bunch of different liquidity pools created by users. Instead of being restricted to a 50/50 token split like most liquidity protocols, each Balancer pool is made up of 2 to 8 tokens to make the total percentage of the pool, and the technology behind Balancer makes sure that this weighted percentage remains constant by trading between the coins.

Balancer also recently launched its own governance token, similar to Compound with $COMP. Balancer released a $BAL is a governance token that will allow the token holders to have a vote in the future direction of the decentralized protocol.

In short, users that provide liquidity to any Balancer pool are earning $BAL on top of the pool swap fees.

Jarvis is a relatively unknown project that already has its own $JRT token in circulation. Jarvis is a set of protocols on Ethereum that aims to “Uberize” brokerage with the hope to allow anyone to become a broker through funding liquidity pools.

They also have a Jarvis Margin Protocol which allows traders to open up leveraged positions on any assets against liquidity pools that are created by the liquidity providers.

How does Jarvis Network bear the risk for Liquidity Providers (LP)?

Liquidity Providers are rewarded in commissions as providing liquidity can carry a lot of risks. To manage this risk the Liquidity Provider is required to run something that is known as a “desk node” which will allow them to be connected with the Jarvis Network price feed.

The liquidity provider will have two different strategies to choose from;

As the entire DeFi industry continues to grow, there will be a greater need for more liquidity to satisfy buyers and sellers. This leads to the creation of incentive programs for token holders to provide liquidity.

The thing that all of these projects have in common is an incentive program in place in the form of their own tokens being distributed among liquidity providers. As DeFi continues its expansion we can expect to see more projects catch up with the new trend called liquidity mining. 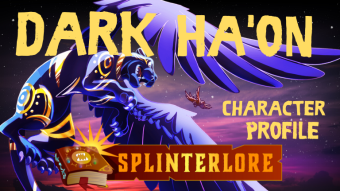