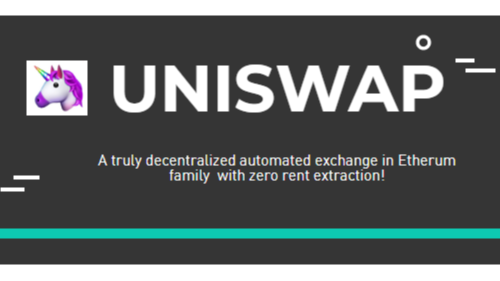 There are two major milestones in the history of the crypto ecosystem. The first one is very known to all and that is the birth of cryptocurrency Bitcoin on the top of blockchain technology in the year 2009 and the second major milestone was in the year 2014 when the crypto ecosystem realized the essence of a smart contract with Etherum Blockchain. The utilities of crypto assets further flourished with smart contract.

Exchanging an asset to realize the value of the asset is very important for the ecosystem. The index properties of any asset can be established only when the value of the asset is known. The value of an asset can be known only when it will be exchanged to another form of assets (such as commodities, fiat cash, etc), otherwise, the asset will be considered worthless. For crypto-assets also, the same thing applies. So exchanging crypto assets is also an essential utility for the economy. The exchanges facilitate the use-case of exchanging crypto assets to another type of asset (such as fiat, altcoin, bitcoin, etc). Exchanges are a major part of the economy. 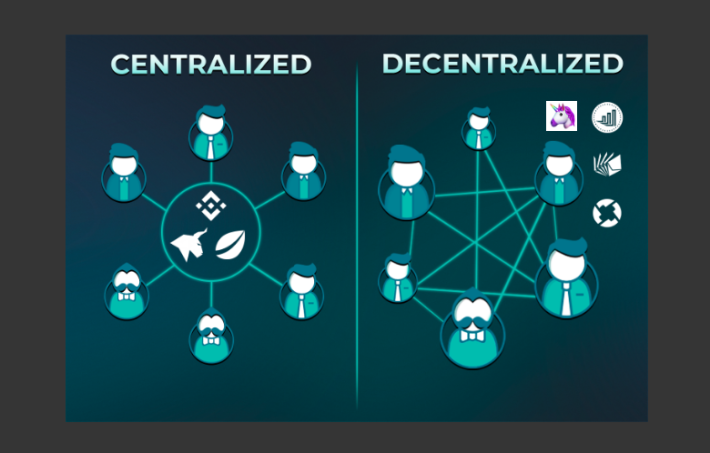 So there is a tradeoff between usability and security of the fund. Interestingly, if you ask any trader in the crypto ecosystem, their choice of an exchange will be the one which can ensure usability & security both.

The centralized exchanges are still the first choice for a trader because they have better liquidity than DEXs. The liquidity in DEXs can be improved if all the DEXs are bridged together. But interoperability between various heterogeneous blockchains is still an issue. A hybrid solution (a combination of centralized and decentralized exchange) can also be a solution but that will not guarantee better market conditions & cost-effectiveness for a trader.

Many developments have been going on in the crypto ecosystem, particularly since 2017, to make the DEX space usable, secure & with enough liquidity.

Etherum blockchain being the biggest family with highest number of dapps and their ERC20 tokens, the decentralized exchange of ETH to ERC20 tokens is a major part of this economy. Many types of DEXs have evolved which are specific to addressing the existing issues & generic flaws of DEX.

This article will analyze the different models of DEX that are available and it will also analyze how good Uniswap is, as a DEX in the Etherum family.

So in an orderbook exchange model, the market pools together all the bid value and ask value and based on that the exchange value of an asset is determined. So an orderbook always specifies the price for a trader. The price can be best in the liquid market and can be worst in an illiquid market.

In on-chain order book each time a trader place, modify or cancel an order, it costs some amount of transaction fees(in gas), so it is cost-prohibitive. The on-chain transaction also takes time, so the speed is limited by the block production time. So it is not time efficient either.

In an off-chain order book, the speed can be improved. If off-chain order relay and on-chain settlement are added with shared liquidity pool as in the case of 0x protocol, then it can further improve the liquidity. So to some extent, it can solve the generic flaws of DEXs. But such a model also results in order collision and griefing.

Whatever are the sub-types, an Orderbook model works good as long as there is enough liquidity.  So ideally it is good for centralized exchanges. It is also good for large size orders. The spread in the orderbook in a liquid market is tight & competitive, hence cost-effective for a trader. But if the markets become illiquid then the spread will widen, which is not cost-effective for a trader.

The on-chain orderbook is also subjected to front-running. In an on-chain transaction, a miner can easily see it, if the order size is big & has the potential to drive the price, then the miner can place an order to his advantage & include it before the big size order. This is always an artificial constraint. Market manipulation is also very prevalent in the case of an orderbook model.

Uniswap uses constant product Market Maker Model in which the variant is always fixed. That means the price is automatically adjusted with the equation xy=constant.  The price is always available for a trader. The only condition is that a liquidity pool must exist, no matter how high or how low the liquidity pool is. That also means that in illiquid market also it will work. In Uniswap, the price does not increase linearly rather increases asymptotically as the quantity of the asset increases.

The underlying principle in Uniswap is Constant Product Market Maker Model in which xy=k, where k is a constant and x and y are the paired assets. In its contract, x is defined as ETH pool and y is defined as the ERC20 tokens pool. So every time a trade is executed, the token price is determined by the ratio of x and y so that xy=k. The product of the liquidity of both sides should be constant. So x and y are inversely proportional to each other. If x increases, y goes down and vice versa. 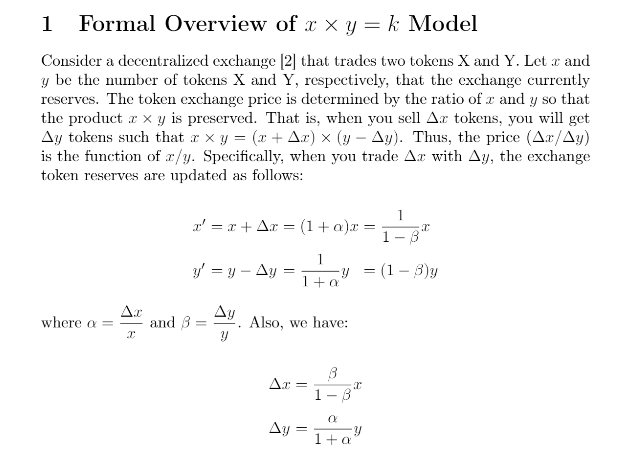 Factory contract: It has a record of all tokens and the associated exchange address. A user can create an exchange contract for an ERC20 token. 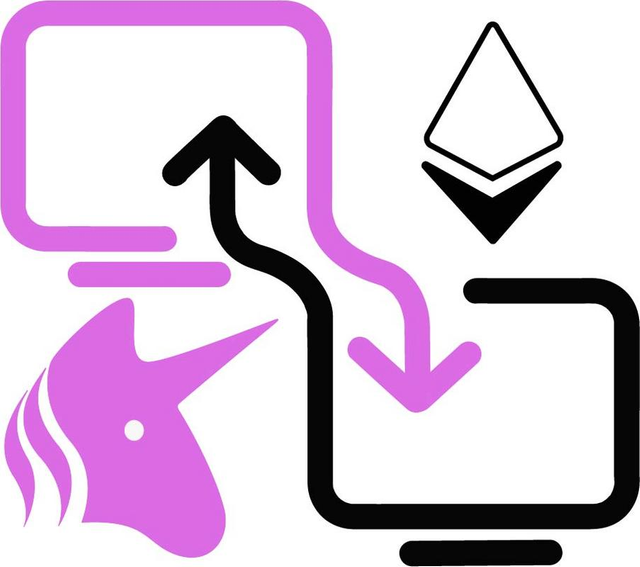 Exchange contract: For every pair there will be an exchange contract. For example- ETH/BAT, ETH/DAI, ETH/NEXO, etc. It also holds both sides of the liquidity pool. So each contract holds the reserve of ETH and the associated ERC20 tokens for that contract. The equivalent value on both sides must be the same.

Anyone can exchange ETH-ERC20, ERC20-ETH, ERC20-ERC20. In case ERC20-ERC20 exchange it is routed through ETH as intermediary. So in such a case, 2-fold exchange happens in a single transaction. So technically it happens through two different liquidity pools with ETH as the common in both the pools. 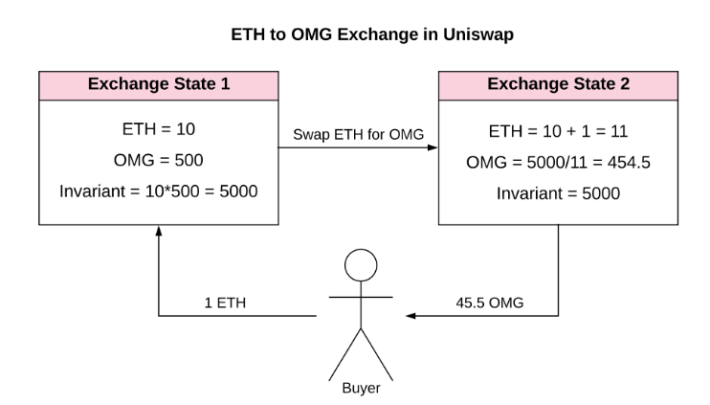 The expected price slippage is shown in the interface of Uniswap which depends on the size of the trade.

It must be noted that when a liquidity provider withdraws his share, then both ETH and the corresponding ERC20 token of a pool will be withdrawn based on the current exchange rate and not on the basis of the original ratio(at the time of adding to the liquidity pool). The withdrawn amount of ETH and the corresponding ERC20 tokens also include the proportional share of exchange fees that is added to the pool every time an exchange happens.

There is no unifying native token in Uniswap and all the fees that are incurred on the part of the traders are all distributed among the liquidity providers proportionally. So Uniswap is a perfect model of a decentralized exchange.

Uniswap mitigates the flaws like front-running. It allows a trader to specify the maximum price during an exchange so that in the worst possible scenario he will only miss a trade and will never suffer any financial implication with the worst price. However, a small extent of front-running may still be possible, that all depends on the range of maximum/minimum value set by a trader.

How to get started 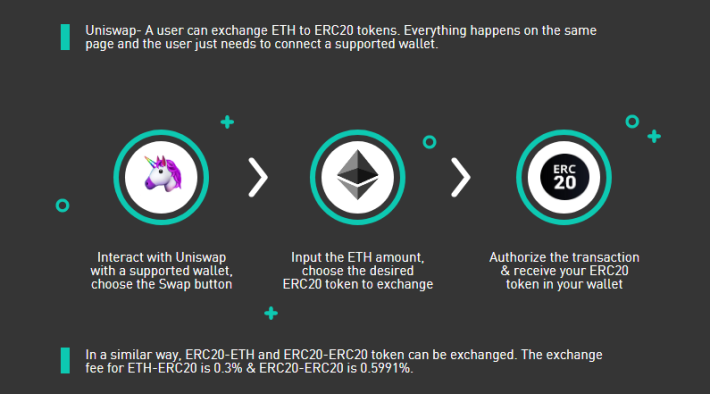 So you must have any of these wallets to be able to interact with Uniswap & make a swap or deposit to the liquidity pool.

I am using Metamask to interact with Uniswap. 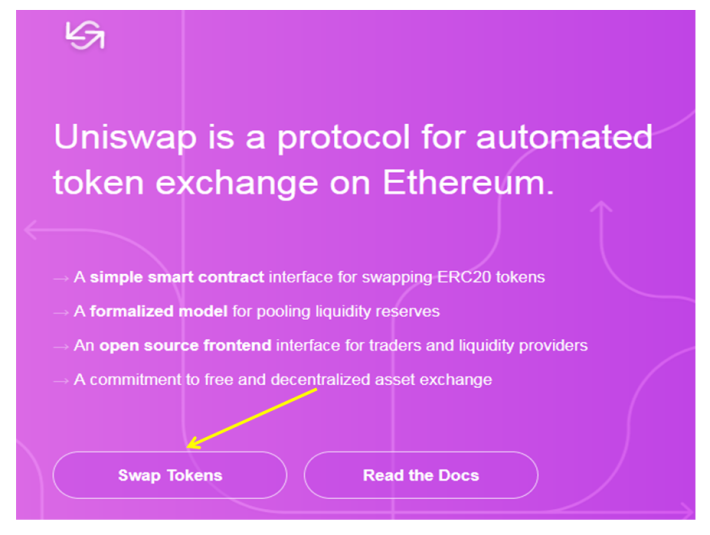 The next step is to click on Connect to wallet. 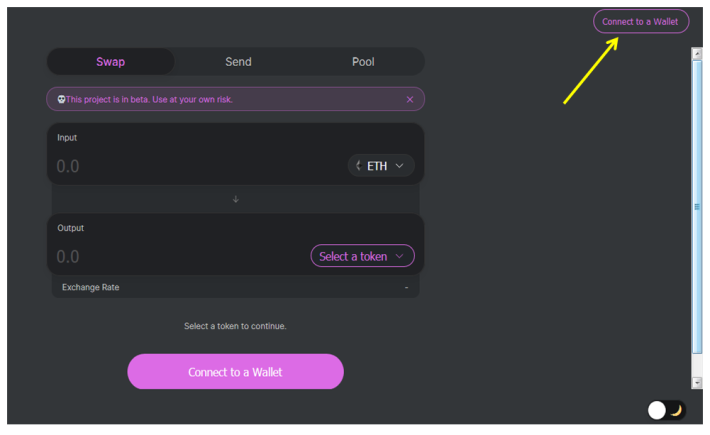 You can notice a number of wallet options. I am selecting Metamask here.

A pop-up will open which ask you to authorize the interaction with Uniswap. Click on Connect. 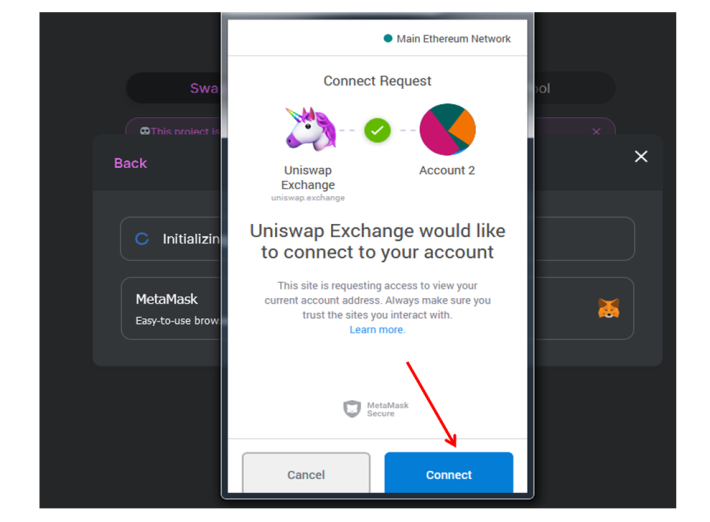 Now your wallet is connected.

There are three tabs you can notice- Swap, Send and Pool.

If you want to be a liquidity provider to the pool then you click on pool and deposit. When you deposit, you have to deposit on both sides of the pair(means x and y both so that xy=k). So If I choose ETH/BAT then the equivalent value of ETH as well as BAT I have to deposit. Prior to depositing, you can check the stat of the pool which is displayed at the bottom where the exchange rate, current pool size, etc are clearly mentioned. In order to proceed with the deposit, click on Add liquidity. Confirm the transaction through Metamask. 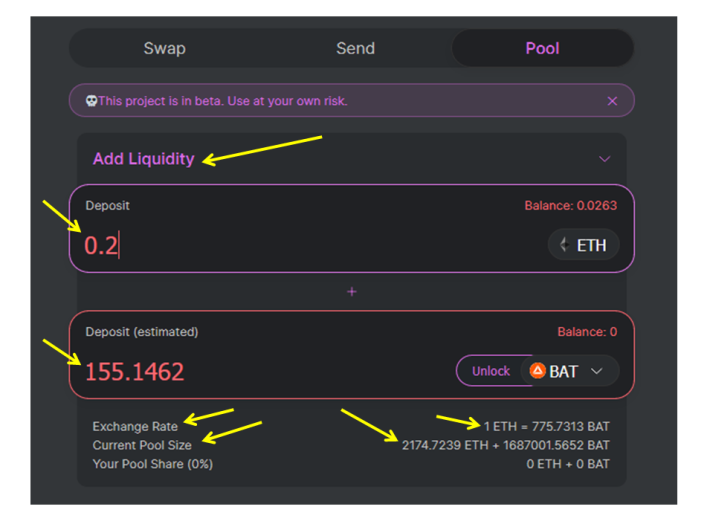 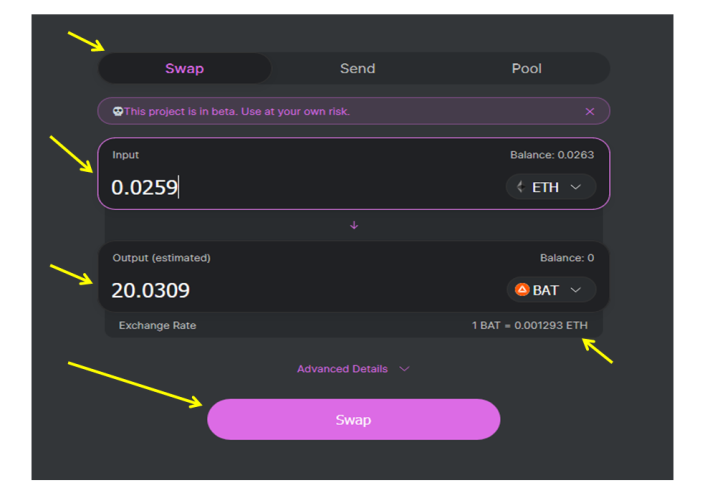 Input the ETH amount, then the estimated output amount will be displayed. Here, in this case, it is showing 20.03 BAT.

Hit the Swap button, it will take you to the Metamask wallet to authorize the transaction. Click on Confirm. Now wait for the transaction to broadcast through Etherum blockchain, after that you can check your wallet to see whether the ERC20 tokens received or not. 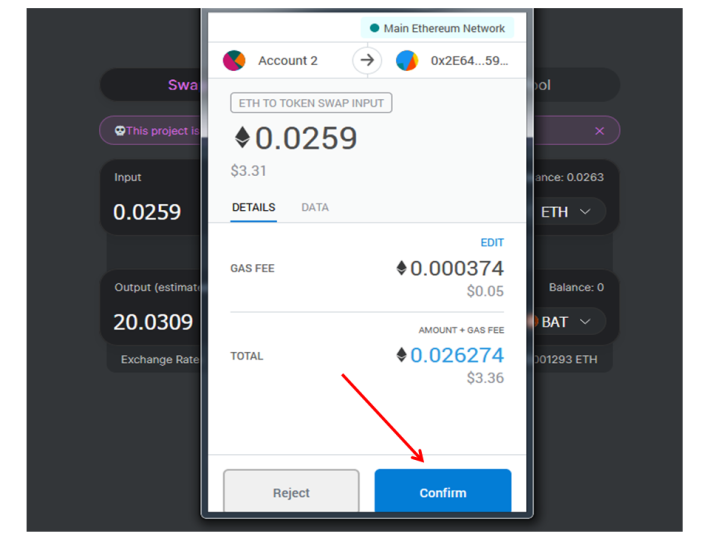 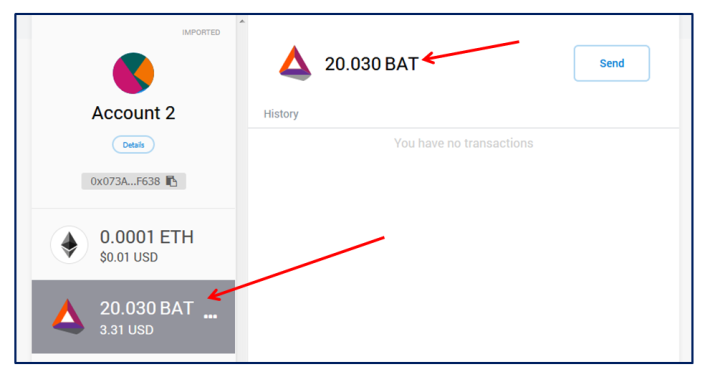 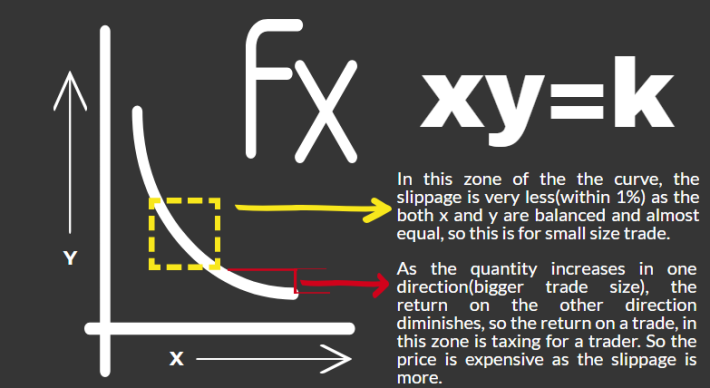 In the liquidity pool, the exchange fee that is incurred on the part of a trader is added to the liquidity pool after every exchange and the next exchange rate is decided on the basis of the new reserve ratio. The exchange rate is always on the basis of reserve ratio(x/y), so after every exchange, the invariant or the product of x and y slightly increases. Interestingly, new liquidity token is not minted for this fee which is added to the pool, so the amount of ETH and the corresponding ERC20 token that is withdrawn from a pool has the proportional share of exchange fees, which is a dividend for the liquidity provider. 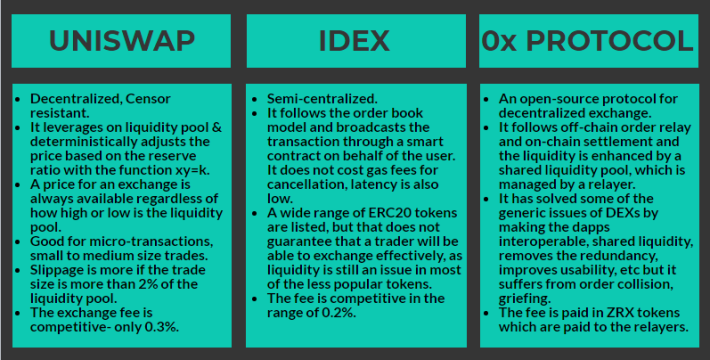 Summary-Uniswap as the best DAPP

There is no doubt that many types of DEXs are available in Etherum family. But there is hardly any DAPP which covers almost all aspects of a user, particular the common people of this market. For a micro exchange to happen in other types of DEX, a user has to depend on the orderbook which is mostly illiquid for less popular tokens and may have to wait for days or even weeks. Even if the trader realizes an exchange value, it is not cost-effective. So Uniswap comes to the rescue of such people. Uniswap is really a life line for the common people who usually do small to medium size trades.

We must not forget that unlike other platforms, Uniswap does not charge any platform fees, the exchange fees charged from the traders are added to the liquidity pool and then shared among the liquidity providers proportionally. The exchange fee of 0.3% is quite competitive.

It may not be a useful platform for a big size trade, but we also know that those who are capable have other kinds of resources to trade their assets. But for a common user the resources are generally restrictive, Uniswap is a lifeline to the common users and probably the only exchange which ensures both usability and decentralization, simultaneously.

Uniswap does not have a native token either, so it does not damage the user experience of such a wonderful exchange platform. Uniswap as a DEX has all the attributes to usher the era of decentralized exchanges.

A civil engineer by profession, a blogger by passion especially in decentralized media.